Women arrested in Iran for riding bicycles in public 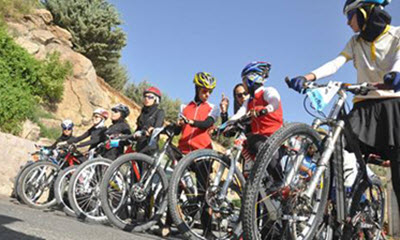 NCRI – Iran’s fundamentalist regime on Tuesday arrested a group of women for riding bicycles in public in the north-western city of Marivan, in Iran’s Kurdistan Province.

The incident took place on July 26 as a group of women were planning to participate in a sports event to cycle from the city’s Stadium Square to the Zaribar Lake.

According to eye-witness accounts, suppressive state security forces (police) approached the women and girls and informed them that based on a new government directive cycling by women in public places is barred and considered “unlawful.”

The suppressive forces demanded that the women and girls sign written pledges to not repeat their “violation” of cycling in public.

Several of the women who protested the regime’s new misogynist measure were taken into custody, witnesses said.

Commenting on the new suppressive measure, Ms. Farideh Karimi, a member of the National Council of Resistance of Iran (NCRI) and a human rights activist, said:

“Suppression of women has been a tenet of the mullahs’ regime from its outset. This latest restrictive measure shows that misogyny is being stepped up under Hassan Rouhani’s administration. With each passing day the mullahs’ regime is further infringing on the basic rights of women which they had fought hard to obtain.

Such gender discrimination and the overall increase in brutal human rights violations speaks well of the reality that Hassan Rouhani is no different from the other mullahs and the hopes for an improvement of women’s rights in Iran which some had advocated at the start of his tenure as President are a mirage.

The world is now belatedly taking note of this tragedy, with the UK’s Foreign Office stating in its most recent update on Iran last week that the human rights situation has worsened in the past six months.”

Previous articleAmbassador Bloomfield: the West’s misunderstandings about Iran
Next articleIran hangs seven prisoners in one day