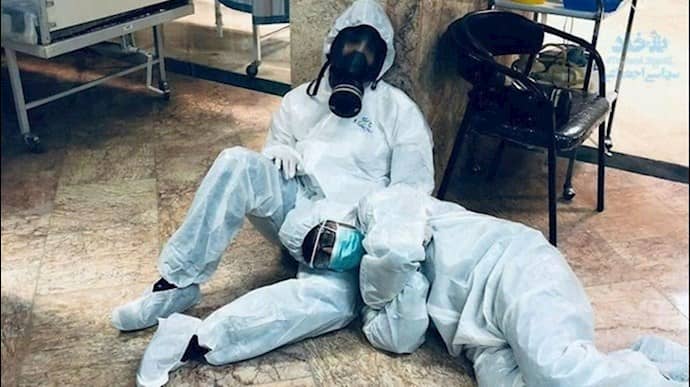 The Iranian regime’s Supreme Leader, Ali Khamenei, who oversees one of the world’s largest financial empires, shed crocodile tears for nurses on Sunday but refused to address and order the resolution of their problems.

He said, “nurses are angels above patients.” As the highest authority in a regime that has deliberately covered up the virus, Khamenei did not have a sudden change of heart about nurses and their problems. He fears something else.

To understand this better, it is necessary to glance at the deplorable situation of Iranian nurses.

“A limited number of nurses in hospitals have to take care of the high numbers of patients. This has forced the nurses into a war of attrition. So far, over 60,000 nurses have been diagnosed with Covid-19, and nearly 100 have died,” wrote the state-run Hamdeli daily on Sunday.

The regime’s officials have acknowledged the reason for this tragedy. “During these years, nothing has been done for nurses, and promises of support have been only words. Before the coronavirus outbreak, we were among the undeveloped countries in terms of the number of nurses, and during the pandemic, this shortage of nursing staff intensified,” said Mohammad Sharifi-Moghadam, Secretary-General of Iran’s Nurse House, on December 19.

“Nurses are under a lot of pressure. These people’s rights are few, they are inappropriately treated, and their social dignity is not respected. Discrimination is rampant in the Ministry of Health because there is a conflict of interest in this ministry,” he added.

The state-run Farhikhtegan daily published an interview with an Iranian nurse on December 17, showing some aspects of Iranian nurses’ hard lives.

The increasing anger of the nurses’ community towards the regime has terrified the regime. Khamenei knows that since nurses are emotionally close to the Covid-19 patients, who suffer due to the regime’s mismanagement of the virus, their hatred of the regime will increase the society’s restiveness.

Therefore, Khamenei rushed to the scene in a desperate attempt to control the situation.

If Khamenei had the slightest intention of helping nurses, he could have used his financial empire to resolve their problems.

According to a Reuters investigative report in 2013, Khamenei’s wealth was estimated to be above $95 billion.

Behzad Nabavi, a government minister in several administrations, said in an interview with the state-run Alef news agency on September 21, 2019: “In our country, there are four institutions which control 60 percent of the national wealth. This includes Executive Headquarters of Imam’s Directive (Setad Ejraie Farman Imam), Khatam-ol-Anbiay Base, Astan-e Quds, and Foundation of the Oppressed and Disabled. None of these institutions are in connection with the government and parliament.”

According to an exclusive report by the Iranian Resistance, Astan-e Quds Razavi, which is overseen by Khamenei, “enjoys tax exemption; its assets include 50 large companies and 43 percent of Mashhad real estate, the second-most populous city in Iran. In other words, AQR owns over 13,000 acres of land in Mashhad alone.”

“This organization has full independence in the petroleum operations it controls. It has exclusive oil rigs and profits from its imports and exports. Astan-e Quds Razavi also owns a part of Iran’s railroads and industries, such as Mobarakeh Steel and a large portion of the country’s mines and resources. This is only a part of its overall possessions,” the report adds.

In the first month of the Covid-19 crisis in Iran, Khamenei allocated one billion euros to the health ministry. Yet, the regime’s Minister of Health, Said Namaki, in September said: “Of the one billion euros that we agreed to withdraw from the development fund, I have not received but a small share for months; I do not know for what more important work they are using it.”

Indeed, the money is being used to fund terrorism abroad or lost in the regime’s corruption’s black hole.

Heshmatullah Falahatpisheh, a former member of the regime’s parliament, on May 20 said: “I went to Syria, some people said I made up some expenses, but I repeat, we may have given Syria $20 to $30 billion, and we have to take it back.” Falahatipishe traveled to Syria in December 2018, when he was the Parliament’s Security and Foreign Policy Commission Chairman and met with Bashar al-Assad.

Khamenei tried to show he is supportive of the nurses but failed. He is not able to contain society’s anger. As Shahriyar Mandani-pour, one of the regime’s economists, on Saturday said: “People are fed up with embezzlements, unemployment, unbridled inflation, disgraceful acts by the authorities’ children, poverty, the massive social gap, and the gradual purge of the middle class.”

Khamenei entering the scene and shedding crocodile tears for the nurses shows the horror he has of the nurses’ hatred and of the eruption of social anger. A critical situation that, according to the state-run Hamdeli, “could result in the rebellion of the army of starving people at any time, triggered by any move.”