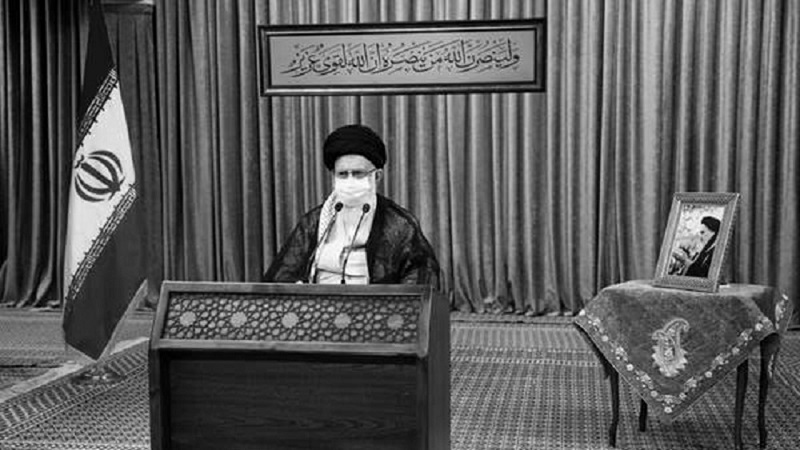 The Iranian regime’s supreme leader, Ali Khamenei, in a speech on Wednesday warned officials of his regime of being torn to pieces. In line with Khamenei, other regime officials and state-run media expressed their fear.

They particularly expressed concern about social and economic crises, such as unbridled inflation, poverty, the Covid-19 crisis, the regime’s institutionalized corruption, and the huge social gap.

Officials also warned one another of the growing influence of the Iranian Resistance.
The regime’s economic mismanagement has reached a point where “seven out of 10 deciles of citizens are below the poverty line, and the poverty line for a family of five is estimated at ten million tomans,” according to the state-run Hamdeli daily on December 19.

Thus, the regime’s officials are terrified of another possible uprising. “We are facing the movement of the poor. What if this trend continues? The lower classes, who make up half of Iran’s society, are extremely dissatisfied and under pressure. They will play a significant role in future developments [uprisings],” wrote the state-run Sharq on December 19.

While people are grappling with poverty, the regime’s officials and their relatives enjoy a luxury life, by plundering people’s wealth. Therefore, the social gap has widened. “People are fed up with embezzlements, unemployment, unbridled inflation, disgraceful acts by the authorities’ children, poverty, the massive social gap, and the gradual purge of the middle class,” said Shahriyar Mandani-pour, one of the regime’s economists, on Saturday.

“In the November protests we witnessed the middle and lower class merging into one,” Mandani-pour added.

Although the regime is under international pressure for its malign activities, it fears the social crisis the most. “More than threat from beyond the borders, [the regime] faces domestic challenges. The more sad [and dangerous] one is the empty table and the growing hatred of a large part of the society,” Mandani-pour said in this regard.

In addition to the economic crisis, the regime’s mismanagement of the Covdi-19 crisis has increased people’s abhorrence toward the regime. While the world rapidly moves toward free vaccination, with governments purchasing millions of dozes, according to Homayoun Sameh, Member of the Parliamentary Health Commission, “People should know that there is no news of the vaccine in Iran at the moment.”

“As the world moves toward the end of the pandemic, the hard days of the Covid-19 crisis are not apparently over in Iran,” wrote the state-run Hamdeli daily on Saturday.

According to reports tallied by the Iranian opposition, over 188,700 people have so far died due to the Covid-19 crisis in Iran. The regime’s mismanagement of this crisis has added to the society’s restiveness.

The Iranian people showed their desire for regime change in their glorious uprising in 2018 and 2019. Thus, they are more attracted to the Iranian Resistance movement and its longtime goal of regime change.

This has reached a point whereby the state-run Keyhan daily, Khamenei’s mouthpiece, on Saturday warned: “[The Iranian Resistance] secretly but dangerously is attacking and affecting the system. Invasion and cultural warfare these days have become a hand-to-hand war in cyberspace, sending many teenagers and young people into this battle daily.”
In other words, the society’s restiveness has shaken the ground under the feet of the mullahs’ regime.

“Sovereignty behaviors have manifested themselves in the form of social conflicts on the streets. In recent years, we have clearly experienced its violent and dangerous appearance,” said Hossein Marashi, former Vice President for Cultural Heritage and Tourism.

According to the state-run Hamdeli, this situation “could result in the rebellion of the army of starving people at any time, triggered by any move.”

All warnings indicate that the main crisis for the mullahs is the Iranian people’s confrontation with the regime. Other crises arise from this major crisis and ultimately exacerbate this social crisis.

These warnings also indicate that the mullahs’ regime considers the people and their Resistance as the real threat and enemy. As the regime’s officials have acknowledged, other crises also turn into a threat of overthrow in this context.