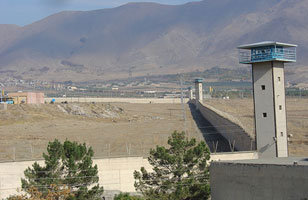 NCRI – Three political prisoners in Iran have written a letter to the United Nations telling of the death threats, forced confessions, intimidation of their families, starvation and squalor they are being forced to endure at the hands of their Iranian guards.

The inmates from Gohardasht Prison urged UN Secretary General Ban Ki-Moon and High Commissioner for Human Rights (OHCHR) chief Navi Pilay to send a fact-finding mission to expose the violation of their human rights at eight prisons in Iran.

The men named as Shahrokh Zamani, Saleh Kohandel, and Khaled Hardani said the abusive treatment was getting ever worse in the run up to the ‘sham’ presidential elections in Iran later this year.

They wrote: “On the eve of the sham and undemocratic presidential elections and renewed power factions feuding in Iran, the pressure on political prisoners in Rajaee-shahr (Gohardasht) prison is increasing.

“The illegal summonses to intelligence ward 209 and the complete and persistent cut-off of food rations, as well as the lack of proper health care for exiled and political prisoners are all engineered by intelligence ministry and Tehran’s prosecutor.

They went on to give 14 examples of extreme mistreatment – but stressed the list was only part of the abuse being directly engineered by Iran’s intelligence ministry:

2) Forcing political prisoners to confess and reprent, especially in televised interviews in order to put pressure on the their families.

3) Failure to provide real and specialized medical treatment for prisoners. The treatment is limited to providing basic medicine.  Three prisoners named as Zaniar Moradi, Namegh Mahmoudi and Naseh Youcefi should all have been taken to specialized hospitals for treatment. Most of the drugs are provided by the prisoners’ families and prison officials fail to provide any prescription drugs.

4) Intimidation, threats, and the arrests of the prisoners’ families.  In the past few weeks, the family of Afshin Heyritian was threatened and the family of Misagh Yazdan-Nejad was arrested.

5) Cutting off phone calls completely and installing carcinogenic equipment which is a serious threat to the prisoners’ physical and mental health. Prisoners Farhad Sedghi, Ramin Ziaei, and Afshin Baymani had all previously been allowed to go on conditional leave, but that leave had now been cancelled.

6) The arrest of people of the Baha’I faith for their beliefs, and the exiling of them to Rajaee-shar prison.

7) The complete cut-off of food rations, including meat, vegetables, and fruit.  Sunstituting this with very low grade rice and soyabeans on six days.  Most of this ios thrown away by prisoners, who are forced to buy their own food.

8) The prison’s store provides non-standard, expired, and expensive food without any receipts – for example, the store sells a dozen eggs for 90,000 Rls – more than double the price in a normal shops.  The prisoners have written letters about this issue to the prison officials but received no answer.

9) Restriction on prisoners going out of the cells to receive fresh air, and reducing the hours outside from ten to just two and a half hours.

10) Summonses to intelligence ward 209 and refusing to allow cases to be dealt with are also among the gross human rights violation in prisons.  After the prisoner is jailed, no other organs is allowed knowledge of his business.  Prisoners taken to this notorious interrogation ward include: Arjang Davoudi, Reza Sharif Boukani, and Houshang Rezaei.

11) After the regimes’ factional feuding, fraud and corruption by twobranches of government, as exposed by the state-owned newspaper ‘Iran’, prisoners who expressed views on the issue were deprived access to newspapers and other media.

12) There is lack of sufficient space for prisoners and up to four prisoners are kept in single cells measuring just four and half metres square. This is while the regime’s per capita prison regulations state there should be between 12 and 15 square meters space per prisoner.

13) The prisoners are insulted and humiliated when they are sent to court. They are forced to wear the prison’s dirty and disease-ridden clothes, and are lead away shackeld by their hands and feet which is a gross violation of their human rights and civil rights.  When the prisoners are taken back, they are strip-searched at the quarantine entrance section and are told to sit and stand up to 20 times in front of closed circuit cameras.

14) Weaker prisoners are threatened with death to force them to spy and report on other prisoners.  This issue is considered major psychological torture on political prisoners. We have witnessed on a number of occasions that the prison authorities have made these prisoners addicted to drugs and psychotropic pills to achieve their own immoral and inhumane goals.  Some of these prisoners have admitted that they were given drugs. It should be noted that some of the ordinary prisoners like Ali Soleymani and Navid, who had friendly relationships with political prisoners, were transferred to an unknown location.

The letter goes to say that most of the trials of political prisoners were illegal and unjustified and the verdicts were influenced directly by the agents of intelligence ministry.

They are deprived of legal advice and the sentences do not reflect the charges.  Examples of such illegal action is especially reflected in the cases Ms Nasrin Sotoudeh, Mohammad Seifzadeh, Hamid Bahramian, Naser Zarafshan, Mohammad Mostafaei and other lawyers, the letter said.

And their letter urged: “Excellencies, distinguished heads of the United Nations and High Commissioner for Human Rights, human lives in Iran are in danger.

“We urge you to form a fact finding committee to investigate the gross violation of human rights in prisons in Iran and the total violation of the universal declaration of human rights, to which the Islamic Republic is a signatory, and violation of laws stipulated in the constitution and prisons rules and regulations and civil rights.  We urge you to visit Iran’s prisons, especially Rejaee-shar prison as well as Evin, Azarbaijan, Ahwaz, Kurdistan, Esfahan, and Sistan and Baluchistan prisons.

“As you are aware, in recent weeks the numbers of death sentences issued by the judiciary and mass executions in public as well as secret hangings in prisons have become common.

“While condemning execution, stoning to death, lashing and torture, we urge you to take decisive and practical action instead of just issuing a statement.