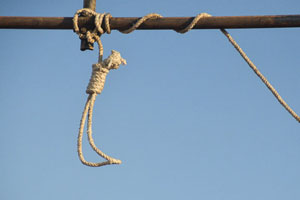 NCRI – The authorities in a prison in a northern city of Iran hanged a young man after he had been on death row for six years.

The 35-year-old prisoner was executed on Wednesday (October 22, 2014) in a prison in Amol – a city in the northern Mazandaran province.

The head of the regime’s judiciary identified the prisoner by his initials – H.S., reported state-run Fars news agency.

Meanwhile, on the same day 10 other inmates have been transferred to isolation to await their execution in three prisons across the country.

Three prisoners were transferred to solitary confinement in a prison in the southern city of Kerman.

In Adel-Abad prison in the southern city of Shiraz six inmates who have been sentenced to death were transferred to isolation to be executed in coming days.

Three of the inmates had been arrested on drug related charges.

A truck driver who had been sentenced to death for drugs being found on his truck without his knowledge has been transferred to await his execution in city of Zahadan, southeastern Iran.

In Iran, under the rule of mullahs and under Hassan Rouhani, the death penalty is being widely used.

Since August 2013 when Hassan Rouhani took office as a ‘moderate’ president, over 1000 – mostly officially announced – executions have been carried out in Iran.

At least 27 women and more than a dozen prisoners who were juveniles at the time of their arrest, together with 20 political prisoners, are amongst those hanged, many publicly.