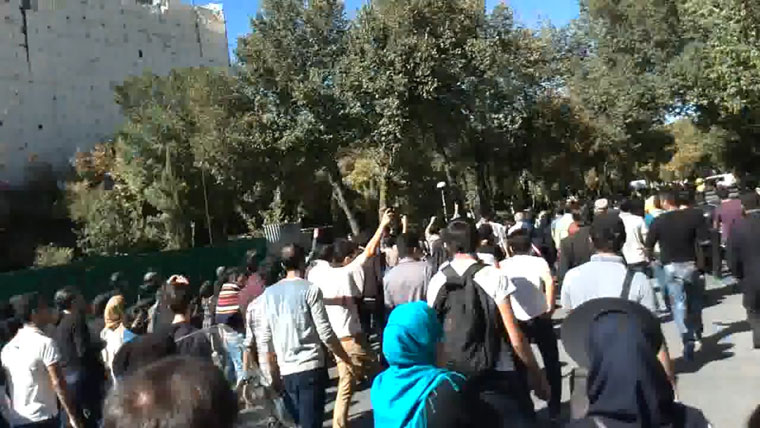 NCRI – The Iranian regime’s State Security Forces (police) attacked the residents of Isfahan protesting against the recent wave of acid attacks by gangs affiliated to the clerical regime in Iran.

The protester shouted saying “the police splashes acid on our faces and as we protest they attack us.”

The State Security Forces were unable to stop the protester who were chanting: “Security, freedom, are the rights of the Iranian women.”

On Wednesday, October 22, the enraged people of Isfahan and Tehran staged an extensive demonstration in protest against the barbarity of the regime-organized criminal gangs who splashacid on women and girls.

The demonstrators chanted: “You victimized sister, you will remain in our heart”, “You worse than ISIS; you splash acid on us”, “Our parliament is our shame, our shame”, “Death to the one who splashes acid… death to one who splashed acid”, “Veiling cannot be achieved by coercion”, “With or without veil, we don’t want splashing of acid”, “The right of woman for security? Splashing acid, atrocity”, “Misogynic laws should be annulled”, “Public prosecutor be ashamed and leave your position”, and “Security forces, where are the eyes of my sister?”

Mrs. Maryam Rajavi, President-elect of the Iranian Resistance, hailed the people of Isfahan and Tehran for demonstrating to protest the anti-human crime by mullahs’ regime against women and called on all Iranians, especially women and youth, to join the national movement in defense of Iranian women. The faltering mullahs’ regime, engulfed in internal and external crises, is trying to avert the explosion of people’s wrath by resorting to these heinous crimes and creating an atmosphere of terror and fear, she said.

Mrs. Rajavi called on the international community to condemn this anti-human crime by mullahs’ regime and to adopt immediate measures through the UN Security Council to stop these crimes. She stated that the silence by the international community in face of these tragedies, for whatever reason, virtually encourages this regime and gives it a free hand to continue with these crimes in Iran.