Iranian Porters Victims of Oppression and Poverty: 24 Killed in 5 Months 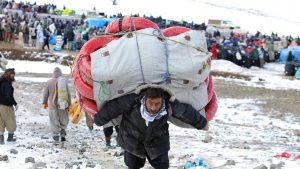 Reports from Iran indicate that the Iranian regime has killed at least 24 porters, one of the most deprived sectors of society who carry goods on their back to cover their families’ expenses in the worst possible weather and working conditions. Dozens of these porters have been wounded, and many others have been imprisoned. Some news outlets reported that between April and July 2020, some 32 porters have been killed. The statistics published by some Iranian news agencies indicate that Revolutionary Guards (IRGC) forces have at least killed 79 porters within the last year at point blank range.

Last week, the IRGC forces wounded at least six porters by directly shooting them in Nowsud, Baneh and Urmia in northwestern Iran. Five porters were wounded on August 18 in Baneh and Nowsud. On Saturday, August 15, the Iranian regime’s border forces directly shot and wounded a porter and arrested three others near the border areas of Urmia.

The same report indicates that on August 13, the IRGC forces opened fire on a group of porters near Kuran village in Urmia, killing a porter identified as 37–year–old Seraj Ahmadi and wounding two others.

The statistic of dead or injured porters in the last five months, does not include those unlucky porters who fell to their death, froze, or were buried under avalanches.

Porters’ job is one of the most difficult and dangerous jobs for the deprived people in the border regions of Iran in the provinces of Kurdistan and East Azerbaijan; and those doing this job are in tough economic conditions.

Obviously the Iranian regime’s institutionalized corruption, plundering national wealth, and monopolizing job opportunities – which have pushed a large number of deprived people in Kurdistan and East Azerbaijan to the valley of poverty – have caused the creation of the hollow yet difficult “job” of porting.  Many of these porters are educated youth holding high degrees, who are doing this job, merely for not having a proper job and grappling with poverty.

There has been a huge social reaction to the Iranian regime’s criminal approach toward the porters.

In late July 2020, the regime’s court in Baneh sentenced ten Baneh citizens to a total of 30 months in prison and 250 lashes. These people had protested in 2017 over the killing of two porters in Baneh and were subsequently repressed and arrested.

The state-run Noor (Light) News which is close to the regime’s Supreme National Security Council, in reaction to the vast demands of the social media users to stop the porter killing spree, wrote: “The wave of ‘do not kill the porter’ was initiated by the dissident media and mostly organized users.”

The mullahs’ regime oppresses deprived people living in poor border areas for attempting to earn their living expenses, meanwhile it spends billions of dollars of the national wealth on terrorism and funding terrorist groups such as Hezbollah in Lebanon. Therefore, the Iranian people chanted during the uprising: “No to Lebanon, no to Gaza, my life for Iran” and identified the regime’s downfall as the only solution to the current situation.

Previous article
Latest News in Brief – August 24, 2020
Next article
Iran: Fifteen Years in Prison, Confiscation of House and Property and Disintegration of a Family on Charges of Supporting the MEK