On Tuesday, Amnesty International’s Farsi Twitter account posted a document from 1988 which recalled attention to the human rights organization’s effort to halt a then-ongoing massacre of political prisoners. The tweet proved two often-disputed facts about the massacre: that the international community had been warned in time for lawmakers and diplomats to take action, and that the killings proceeded with the knowledge and consent of all Iranian officials, not just a particularly hardline faction.

These facts are due to be highlighted again on Saturday when the National Council of Resistance of Iran hosts an online conference to discuss the 32-year-old massacre and renew its call for a UN-led inquiry. The conference is part of a years-long campaign to secure justice for the victims and their families, and although progress has been slow, the NCRI has expressed optimism about the prospect of the massacre being introduced as a topic of debate at the upcoming session of the UN General Assembly.

This optimism is fueled in large part by the fact that the US State Department saw fit, last month, to issue a public statement about the Iranian judiciary’s “ongoing violations of the human rights.” In it, department spokesperson Morgan Ortagus specifically pointed to the creation of “death commissions” in July 1988 as an historical example of the regime’s penchant for political violence. Such high-level recognition of the massacre is potentially a first step toward redressing the Western world’s shameful silence when the massacre was still underway.

Amnesty International’s 1988 “Urgent Action” statement was issued after the families of numerous political prisoners contacted the organization to say that visitations had been halted amidst signs of escalating reprisals. Amnesty rightly concluded that this was indicative of a scheme to secretly carry out mass executions and enforced disappearances, and it contacted several leading officials to protest the situation and demand that they work to immediately end all politically-motivated executions. 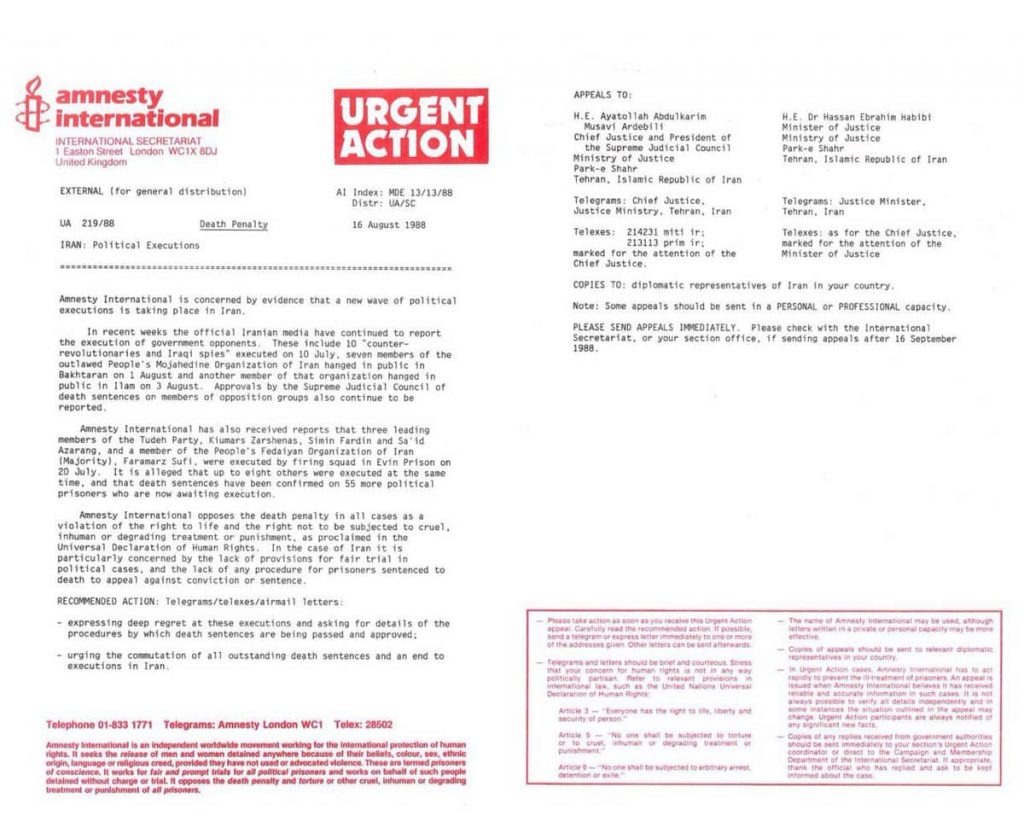 Of course, none of those officials responded with anything other than unconvincing denials. In fact, it seems that no prominent official within the regime raised questions about the 1988 massacre, with one remarkable exception. At the time, Ali Hossein Montazeri, had been designated as Ruhollah Khomeini’s successor to the supreme leadership. But after he confronted the leading perpetrators of the massacre and condemned it as “the worst crime of the Islamic Republic,” he was ousted from the leadership and went on to spend the last years of his life under house arrest.

Meanwhile, the men to whom Montazeri communicated his objections were richly rewarded for their commitment to political violence. They then guided the regime toward the further normalization of such violence for the subsequent three decades. Today, leading participants in the 1988 massacre are fully in charge of Iranian law enforcement, as the heads of both the judiciary and the Justice Ministry. From those positions, they have explicitly defended the legacy of the massacre, which aimed to destroy the leading democratic opposition, the People’s Mojahedin Organization of Iran (PMOI-MEK).

The latest appeals for an international inquiry into the massacre are made more urgent by Tehran’s recent crackdowns on dissent. Last November, the entire country was rocked by an anti-government uprising, the second in two years. In response to resurgent chants of “death to the dictator” and calls for wholesale change of government, authorities directed the Islamic Revolutionary Guard Corps to open fire on crowds of protesters, and to arrest any activists they could get their hands on. Approximately 1,500 people were killed in a matter of days, and a number of detainees have since been sentenced to death.

The civilian death toll and the looming executions raise concerns about whether the perpetrators of the 1988 massacre, still in power, might be considering a renewed effort to destroy the organized Resistance. This would not be a very surprising reaction to the current situation, which has placed the regime in its most vulnerable position since the end of the Iran-Iraq War, at the time of the massacre, when officials were desperate for a domestic show of strength.

In fact, regime’s Supreme Leader Ali Khamenei has personally acknowledged that recent protests were led by the MEK, the very same group that his predecessor had tried in vain to destroy through a campaign of mass executions. Overall, the MEK has lost about 100,000 members to its fight for democracy. About a quarter of that number were executed over several months in 1988 alone. But the organization quickly rebounded, and has steadily grown its support both inside Iran and throughout the international community, as the leading constituent group in the NCRI coalition.

The NCRI’s international base of support is reflected in the diversity of attendance at its annual rallies for regime change, which are typically held near Paris. And many of the political dignitaries who have spoken before those events have also thrown their weight behind efforts to bring more international attention to the 1988 massacre, to have leading world powers formally condemn its perpetrators, and to pursue charges against those perpetrators at the International Criminal Court.

But so far, these efforts have failed to find as influential an outlet as the UN General Assembly. With Iranian activists facing escalating crackdowns and the very real threat of another massacre, it is now more important than ever for the events of 1988 massacre to be exposed on a truly global scale. Anyone who has ever expressed support for democracy and human rights in Iran should now urge their own governments to demand an independent investigation into the “worst crime of the Islamic Republic,” and to thereby make it clear that the mullahs cannot expect to get away with such crimes forever.

If the international community fails to make this message clear and unequivocal, it risks repeating the mistakes of 1988, when Amnesty International and the MEK warned of an unfolding crime against humanity, but those with the power to intercede decided instead to do nothing.