MPs Demanded an Investigation into the case of Narges Mohammadi 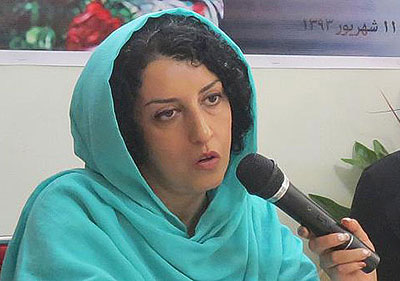 NCRI – A group of MPs in a letter to the Head of the Judiciary, Sadegh Amoli Larijani, called for an investigation into the case of Narges Mohammadi who is the deputy of the Human Rights Defenders in Iran. The MPs called for the violation of the 16 years of imprisonment that she was sentenced to. This news was published by the Iranian press on 16th October 2016.

Regarding the sentence, the letter reads:”Ms. Narges Mohammadi was previously charged with gathering and colluding against the national security as well as propaganda against the regime and she was sentenced respectively to 5 and 1 years of imprisonment by the Court presided by Judge Salavati. In addition to that, she was also charged with organizing and managing the illegal group of “Legam” (a group that works to abolish the death penalty) and sentenced to 10 years of imprisonment. According to the Article 134 of IPC (The Islamic Penal Code), the verdict was not issued properly and as the article explains explicitly, the 3 discretionary committed crimes must be sentenced to the maximum punishment of 10 years in prison.”

Some signatories of the letter are, Ali Motahari,Parvaneh Zolghadr,Alireza Mahjoub, and Soheila Jolodarzadeh. These MPs in the letter stressed on the illness of Narges Mohammade and her separation from her children. They also stated that the issuance of such sentences will only raise the ill-fitting critical words of the critics and it discourages them as well. Therefore, the recession and stagnation will dominate the society and it distances the dissidents from the regime.

The sentence against Narges Mohammadi has been contested by many national and international figures.