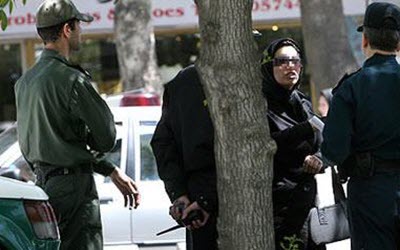 NCRI – Many of the prohibitions that Iranian women are facing are considered bizarre and odd by their counterparts in many other countries. The bans have been changed over time and sometimes become more intense. Let’s get familiar with some of these bans.

Deutsche Welle Farsi has collected and published in a report a list of strange prohibitions for Iranian women in Iran as the followings:

Cycling is prohibited for women

One of the latest prohibitions Iranian women are facing is a ban on bike riding. Recently, Ali Khamenei, Iranian regime’s supreme leader, answering a question on women’s cycling said: “Women’s cycling in public places and also in places where they are visible to strangers is forbidden.”

Women selfies with footballers is prohibited

After some Iranian women published in social networks their selfies with famous footballers in the recent years, the Iranian regime’s so-called “ethics committee” announced: “Women taking selfi photos [with male footballers] is prohibited.”

Employment of women in coffee shops is prohibited

In Iran, women are not allowed to work in some fields. In the latest example of such instance, Iranian Police announced: “Women’s employment in coffee shops (cafés) and coffeehouses is prohibited.”

Iranian women are not allowed to wear boots on pants

Iranian police, in line with their “winter combat (against mal-veiling)” plan, have announced that women are prohibited from wearing boots on pants.

Iranian police also prohibited women from using hats instead of scarves or veils and announced: “Those women who use hats (as a veil) instead of head scarves and wear tight and short winter coats will be dealt with.”

Women are prohibited swimming while wearing maillot or “swimming suit”

In Iran under the rule of mullahs, women are not allowed to wear swimsuit for swimming in front of “stranger men.”

Women are barred from going on stage

According to Sharq newspaper, “Women musicians and performers in 13 provinces in Iran are not allowed to go on the stage for musical performance [playing musical instruments or singing, etc.].”

Women are not allowed to enter sport stadiums

In Iran [under the rule of mullahs], women are not allowed to enter sport stadiums such as football or volleyball stadiums when men are playing matches.

The Iranian regime’s police have in recent years prohibited women from wearing Support (or leggings).

The Iranian regime’s Police and Security forces have announced: “In the discussion on scarf and veil there is a point. Some people (women) think that if their hair is not shown from both sides of scarf but let their hair come out (and be seen) from one side of the scarf, this is not an instance of mal-veiling. In response, they should be told that changing the type of hairdressing is not applicable (the same) as fixed veiling (i.e. is not acceptable as proper veiling).”

Female students are prohibited to go camping with men

State-run Iranian media published an overview of the students mixed (gender) camping in the city of Jiroft as an example of non-compliance with “Islamic values” and a taboo.

Any contraceptive surgery is prohibited for women

In line with the Iran Regime’s policy to encourage population growth, any surgical procedure to prevent pregnancy is prohibited (for women) in Iran. In addition, publicity and advertising about contraception is also prohibited.

According to the Union of coffeehouse (café) and traditional table houses, women’s entry into regular coffeehouses is “illegal” and the traditional coffee – and table – houses are “not authorized” to provide hookah to women.

Divorce at the request of women is not allowed

In Iran under the rule of mullahs, only men have the right to divorce, except in exceptional cases. So, normally women do not have the right and are not allowed to divorce their husband even if a woman does not agree with her husband.

According to Iranian regime’s law, Iranian women are not allowed to obtain a passport or travel abroad without getting permission from their husband or legal male guardian.

After the media affiliated with the Iranian regime’s hardline faction criticized the release of “Women’s manteau (coat) with writing on its back” in Iran, Iranian police has announced plans to deal with the importers of these women’s coats.

Holding track and field competition for women wearing internationally recognized clothing for this sport such as shorts and short-sleeve T-shirts is prohibited.

Iranian women are banned from education in some academic fields

In recent years, Iranian regime’s oil minister announced: “Education of women in the field of operations such as drilling and processing and so on that require (physical) activities in operational areas and sites is useless and these are  masculine (men’s) jobs.”

Previous articleIran: The Report of a University Student
Next articleMPs Demanded an Investigation into the case of Narges Mohammadi