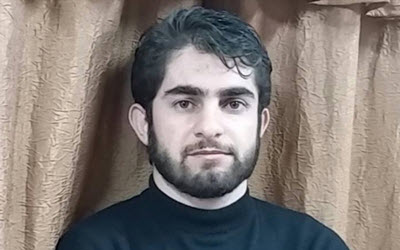 NCRI – On August 2, 2016, Shahram Ahmadi was executed with more than 20 young political prisoners in Gohardasht (Rajai-Shahr) Prison in Karaj, north-west of Tehran. During an interview before his execution, Shahram Ahmadi said: “Judge Moqiseh said to me that I have committed three crimes: being a Kurd, being Sunni and working against the regime. Each of these three crimes carries the death sentence.”

Shahram Ahmadi added: “Here is Hall 10 of Ward 4 of Rajai-Shahr Prison, 40 inmates of this ward are sentenced to execution. They threaten us repeatedly not to take part in an interview. I have lost my brother and I have nothing more to lose. I am indeed innocent and I only want people to know about my innocence before the time of my execution.”

Shahram Ahmadi talked about the tortures inflicted by the wardens in the prison, stating: “The most brutal torture, which we suffered from, was the electric shockers. The physical tortures such as flogging or slapping us did not inflict as much pain; however, the hardest punishment for us was to hear that our families have been threatened. Actually, the hangmen carried out one of the threats and arrested my brother while threatening him that they will also arrest the other members of my family. In order to torture us more, they used to heat up the heating in the summer and turn on the cooler in the winter.”

Last Tuesday, Mrs. Maryam Rajavi, President-elect of the Iranian Resistance, described the mass execution of Sunni prisoners, carried out on the anniversary of the 1988 massacre of political prisoners in Iran, an appalling crime against humanity. The regime is trying in vain to contain the volatile social atmosphere and popular protests by terrorizing the public, she said.