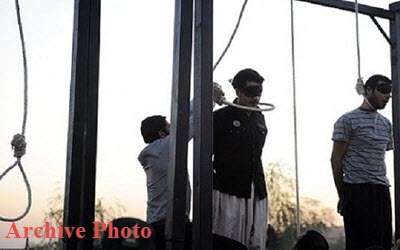 NCRI – Four prisoners were executed on Saturday, August 6, in Lakan Prison in the northern Iranian city of Rasht.

The state broadcaster IRIB quoted Ahmad Siavoshpour, the head of the regime’s judiciary in Gilan Province, as saying that the victims were between the ages of 26 and 65 and one of who was an Afghan citizen. They were accused of drugs-related charges.

On August 3, eight prisoners were hanged by the mullahs’ regime in Ghezel Hesar Prison in Karaj, north-west of Tehran. The names of the victims were not released.

On the same day, two other prisoners were executed in Qazvin Central Prison, north-west of Tehran. Neither victim was named.

The state-run YJC News Agency quoted the regime’s prosecutor in Qazvin, Ismaeil Sadeqi Niaraki, as saying that two other prisoners were executed in Qazvin Central Prison on Saturday, August 6. The victims were only identified as Mojtaba N. and Majid H.

Sadeqi Niaraki added: “The sentence of these two accused was confirmed by the Prosecutor General’s Office and the Head of the Judiciary and was carried out in Qazvin Central Prison this morning.”

In addition to these executions, prison guards are attempting to create a climate of fear for the prisoners in Tehran’s notorious Evin Prison and Gohardasht (Rajai-Shahr) Prison, situated in Karaj.

According to received reports, the mullahs’ judiciary intends to execute another 18 political prisoners. The families of the prisoners talk about the brutal tortures inflicted on their children by the regime’s notorious Ministry of Intelligence and Security (MOIS).

The names of the political prisoners are:

Other sources say that six prisoners in Karoon Prison in the south-western Iranian city of Ahvaz are at imminent danger of execution.

On August 3 and 4, the six prisoners were sentenced to execution and transferred to solitary confinement cells in Karoon Prison.

One of the prisoners named Behrouz Shahriari was less than 18 years old at the time of his alleged offense.

Another report indicates that two young Iranian men are at imminent risk of execution in the Central Prison of Zahedan, south-east Iran. One of the prisoners has been identified as Youness Jamshid Zehi who is in his late twenties. He has proclaimed his innocence.