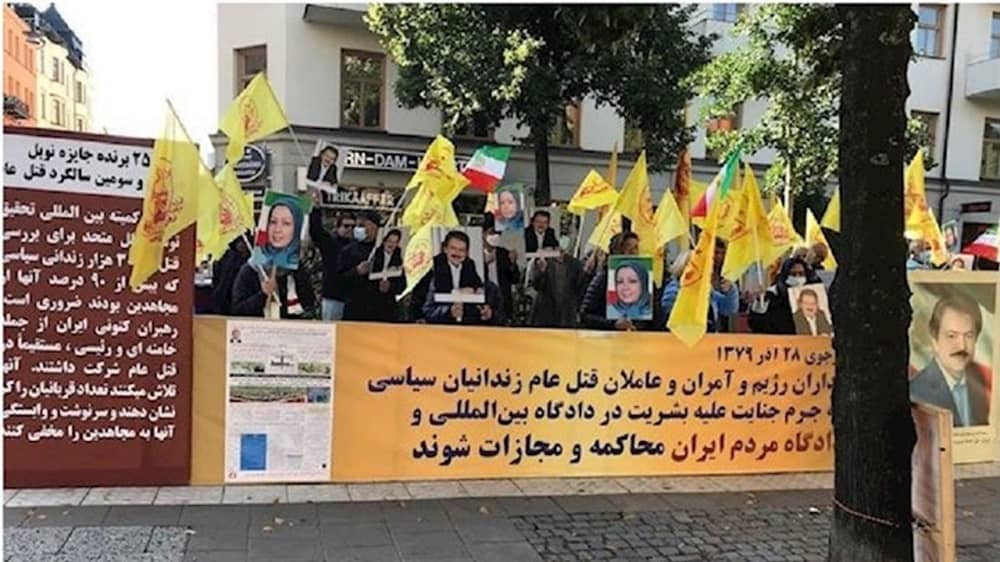 Friday marked the third hearing session of Hamid Noury, a former Iranian prison official involved in the 1988 massacre of political prisoners. Noury was arrested in 2019 in Sweden, and his trial began in early 2021.

The location of the trial was transferred from Sweden to Albania last week, where members of the Mujahedin-e Khalq (MEK) live. The MEK members formed the majority of over 30,000 political prisoners who were hanged in 1988. Seven MEK members, all 1988 massacre survivors, shared harrowing accounts of the Iranian regime’s atrocities, particularly Noury’s crimes, in Iranian prisons.

Responding to the prosecutor about his tenure in Gohardasht prison, he said that once he went to the prison, he found out that there was also a person named Hamid, who was also known as Abbasi. This was a desperate and failed attempt since dozens of witnesses have identified himself as Hamid Abbasi, a torturer in the regime’s prisons.

In response to a question from the prosecutor about the relocation of over 200 prisoners from Evin to Gohardasht at the beginning of 1988, Noury denied being aware of that incident. As the prosecutor underlined, Noury had previously confessed he was working in Gohardasht prison at that time.

Since Noury’s hearing session started, he has used his time to rehash the Iranian regime’s baseless allegations against the MEK, which is Iran’s main opposition group. Noury’s words also indicate that all the allegations, sometimes repeated by Western media outlets, are fabricated cliché fabricated by only one source; Tehran.

On Friday, Noury claimed that MEK members in Ashraf 3, Albania, are “prisoners,” and the MEK is a “cult.” These absurd claims have been repeated by Tehran and its network of “friendly” journalists and lobbies.

It is worth noting that on Thursday, Noury acknowledged that the MEK’s name is a red line in Iran. “When you want me to say People’s Mojahedin Organization, you are putting me in trouble,” Noury told the prosecutor who asked him to use the MEK’s full name instead of calling the organization “Monafeghin.” Monafeghin is a term only used by the regime officials inside and outside Iran to address the MEK.

On several occasions, Noury has acknowledged his crimes in Iran’s prisons. On Friday, he admitted to extracting forced confessions from prisoners. He also acknowledged that the regime had confiscated the houses of prisoners’ relatives once a prisoner left Iran.

On Tuesday, Noury also acknowledged that he was involved in the regime’s crimes in the 1980s, including killing from the Kurdish minority and MEK members.  He also blatantly claimed that the 1988 massacre was a “made up and undocumented story” and a “ridiculous play.”

Noury even went far as to claim that the victims’ belongings that their families showed to the court are fake. Thus, he insulted the families of victims and added to their pain. His flipside of attacking the MEK was his support of the regime and its criminal leaders, such Ebrahim Raisi, the regime’s current president, and Qassem Soleimani, the slain commander of the IRGC Quds Force.

It seems that Noury has mistaken the court in Sweden with the court and prisons in Iran under the mullahs’ regime. Instead of answering questions about his crimes, he regurgitates the regime’s propaganda against the MEK.

During the trial sessions in Albania, the MEK members shed light on Noury’s criminal record, as well as the atrocities taking place in the Iranian prisons.

“In March 1988, a group of prisoners was brought from Kermanshah to Gohardasht. We did not know why the authorities had transferred them, but we later found out that this was part of the plan to classify the prisoners, a plan that had been carried out by Davoud Lashgari, Nasserian [Mohammad Moghiseh], and Hamid Abbasi [Noury] in February 1988,” the MEK member, Mahmoud Royaei, testified during Noury’s trial in Albania.

Noury’s remarks and his blatant defense of criminals like Raisi show a culture of impunity among the regime’s insiders. The international community’s failure to hold the perpetrators of the 1988 massacre accountable has resulted in systematic impunity in Iran.

The regime leaders should face justice for their crimes against humanity, mainly the 1988 massacre and killing of over 1500 protesters during the November 2019 uprising in Iran. The world community should end the regime’s impunity, which would certainly improve Iran’s general human rights situation.