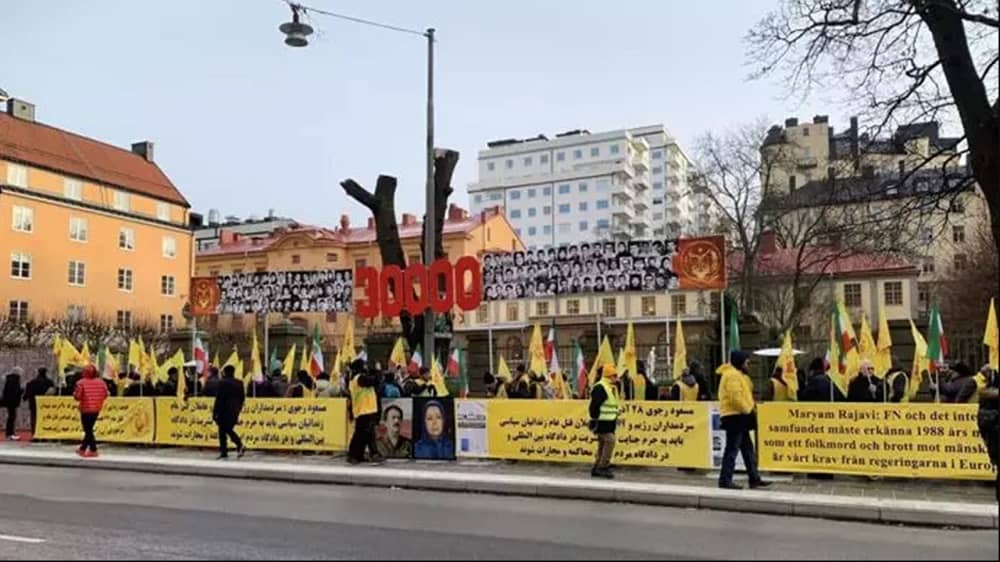 A court in Stockholm, Sweden, held the second hearing for Hamid Noury on Wednesday. Noury is an Iranian prison official who participated in the 1988 massacre. In his remarks on Tuesday, Noury also acknowledged his role in different crimes committed by the mullahs’ regime in the early 1980s.

During his first hearing, Noury, who had claimed he was mistaken for someone else, showed his true color by defending criminals like the regime’s president Ebrahim Raisi, the eliminated terror-mastermind Qassem Soleimani, and Ruhollah Khomeini. Noury also blatantly denied the existence of the 1988 massacre of political prisoners, despite this fact has been confirmed by regime top officials who defended their role in this crime against humanity.

In his remarks during his second hearing session, Noury continued rehashing the regime’s baseless allegations against the Mujahedin-e Khalq (MEK), whose members formed the majority of over 30,000 victims of the 1988 massacre. Last week, the court which transferred to Albania featured harrowing accounts by MEK members who survived the 1988 massacre.

At the beginning of today’s session, one of the lawyers objected to Nouri’s use of the word “Monafeghin” to describe the MEK. The judge also told him not to use Monafeghin. Monfeghin is a derogatory term only used by the regime to call the MEK.

Noury told the judge that he is forced to use this term, as the MEK’s name in Iran is prohibited, and if he says the MEK, he would be arrested once he returns to Iran. He said that the regime’s current Judiciary Chief, Gholamhossain Mohseni-Ejei, takes this issue seriously. Noury even went as far as to tell the prosecutor that “when you say People’s Mojahedin Organization, it creates problems for me.” Prosecutor told him he should not use this word, “I would use the full name of the organization; you should too.”

Shahin Ghobadi, the MEK’s spokesperson in this regard, said: “In the court in Stockholm this morning, criminal Hamid Noury explicitly underscored that the name of People’s Mojahedin Organization (MEK) in Iran is the red line and anyone who mentions the name of the Mojahedin will be prosecuted and arrested.”

It is worth noting that Noury had claimed that the 1988 massacre was a “made up and undocumented story” and a “ridiculous play.”

It seems that Noury had mistaken the court in Sweden with Kangaroo trials in Iran or notorious prisons where he worked. Instead of answering the questions about his crimes, Noury tried to cover up the genocide in 1988 by rehashing the baseless allegations of the Iranian regime against the MEK.

Noury even went as far as to call Khomeini’s fatwa that instigated the genocide “fake.” Khomeini’s fatwa, in his own handwriting, underlines that anyone who supports the MEK should be executed.

In 230 words alone, Khomeini sealed the fate of thousands of Iranian youths in the summer of 1988. This fatwa was implemented by “Death Commissions” that were formed primarily to target the MEK supporters.

“It is decreed that those who are in prisons throughout the country and remain steadfast in their support for the Monafeqin [Arabic term “monafeqin” a derogatory term means “hypocrites” and is used exclusively by the Iranian regime in reference to the Mujahedin-e Khalq Organization], are waging war on God and are condemned to execution,” Khomeini’s fatwa reads in part.

Besides, the shocking testimonies of the MEK members and supporters at Noury’s trial about the 1988 massacre leaves no doubt about the dimensions of the 1988 massacre. According to survivors, the “Death Commissions” identified those MEK supporters who refused to disavow from the organization. These prisoners were immediately taken to the “Death Hall” by Noury and other prison officials and were executed in groups of 12 people.

Simultaneous with Noury’s trial in Sweden, the MEK members in Ashraf 3, Albania, held a gathering. While paying tribute to the martyrs of the 1988 massacre, they vowed to continue their path until they establish a free and democratic country.

The MEK supporters and the families of the regime’s victims held a rally outside the courthouse in Sweden.

Concurrent with the court hearing of Hamid Noury a perpetrator of the #1988Massacre, freedom-loving #Iran|ians, and relatives of the victims continued their rally seeking justice for the victims of this crime. #Stockholm – Sep. 25 #HumanRights – 1/4 pic.twitter.com/8sH8X8wvvW

Noury’s trial should set a precedent for holding all criminals to account for their role in violating the Iranian people’s rights. The regime’s top officials, like Raisi -who played a much significant role than Noury-  should be held accountable. The international community’s inaction to hold these criminals accountable has rendered in systematic impunity. This impunity could end if world leaders hold the regime accountable for its crimes against humanity.