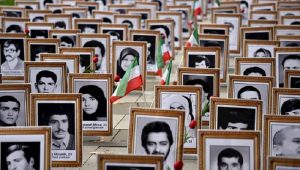 A letter sent by seven UN Special Rapporteurs on Human Rights to the Iranian regime, in order to clarify the position of the regime on the 1988 massacre of political prisoners, is a very “momentous breakthrough” according to Amnesty International.

In 1988, the then-Supreme leader Ruhollah Khomeini ordered a fatwa to eradicate any political oppositions to his despotic regime, which lead to the mass executions of some 30,000 political prisoners in the span of just a few months. Such a ferocity was unexpected, in several cases even among the regime’s establishment, as Khomeini’s designated successor, Ayatollah Montazeri, who publicly chose to take a stand against the diktat and for that was declared a foe of the state and placed under house arrest for several years.

In the summer of 1988, thousands were hanged nationwide, truckloads of bodies were driven to mass graves overnight. Bulldozers rapidly emptied them, and the earth swallowed all witnesses of a cruel breathing ideology, and it was upon history to forget them once and for all. An entire generation vanished. Thirty thousand names, faces, dreams, and aspiring futures dead and buried.

In more than 30 years, the nasty appeasement of the international community with the regime only achieved more suppression, more human souls crushed, and more lives vanished inside Iran despite international NGOs operating on the protection of human rights and Iranian opposition groups’ struggle to inspire international awakening on the real nature of the Ayatollahs.

In their letter delivered to Iran, the seven UN Special Rapporteurs were not able to do anything but to realize that the International Community didn’t take any action to halt the ongoing massacre:

“In December 1988, the UN General Assembly passed resolution A/RES/43/137 on the situation of human rights in Iran, which expressed “grave concern” about ” a renewed wave of executions in the period July-September 1988″ targeting prisoners “because of their political convictions”. However, the situation was not referred to the Security Council, the UN General Assembly did not follow up on the resolution and the UN Commission on Human Rights did not take any action. The failure to these bodies to act had a devastating impact on the survivors and families as well on the general situation of human rights in Iran and emboldened Iran to continue to conceal the fate of the victims and to maintain a strategy of deflection and denial that continue to date.”

It is now the time to prioritize a very strong defense of human rights of the Iranian people. The world must recognize the Iranian regime for what it is: an extremist, terrorist organization. Its behavior leaves no doubt that the international community must do more to force Tehran to end its malign behaviors.

The regime continues its reign of terror across the region and beyond. A global arms embargo will represent an absolute necessity in stifling Tehran’s ability to arm its global terror proxies, to trade advanced weapons with its allies (some of them also Permanent members of UN Security Council); and by that trade earning huge amounts of money to expand corruption and terrorism.

The time has come to prioritize peace over profits and unify a politically smart “coalition of the willing” behind a maximum pressure campaign to hold the regime accountable for its crimes within Iran and all over the world.

It is now the time to stop the shiftless approach to save, at any cost, the Iran nuclear deal known as the JCPOA. The sad fact is that European policy has long been prone to conciliation and appeasement in its dealings with the Islamic Republic. The desire to foster relations with “moderates” inside the Islamist regime has often resulted in Western policymakers turning a blind eye to the actions of the regime including actions that directly threatened the lives of Western personnel.

The time for deeply flawed deals is over. We must commit to an economic blockade of Iran. This is an international security “must”.