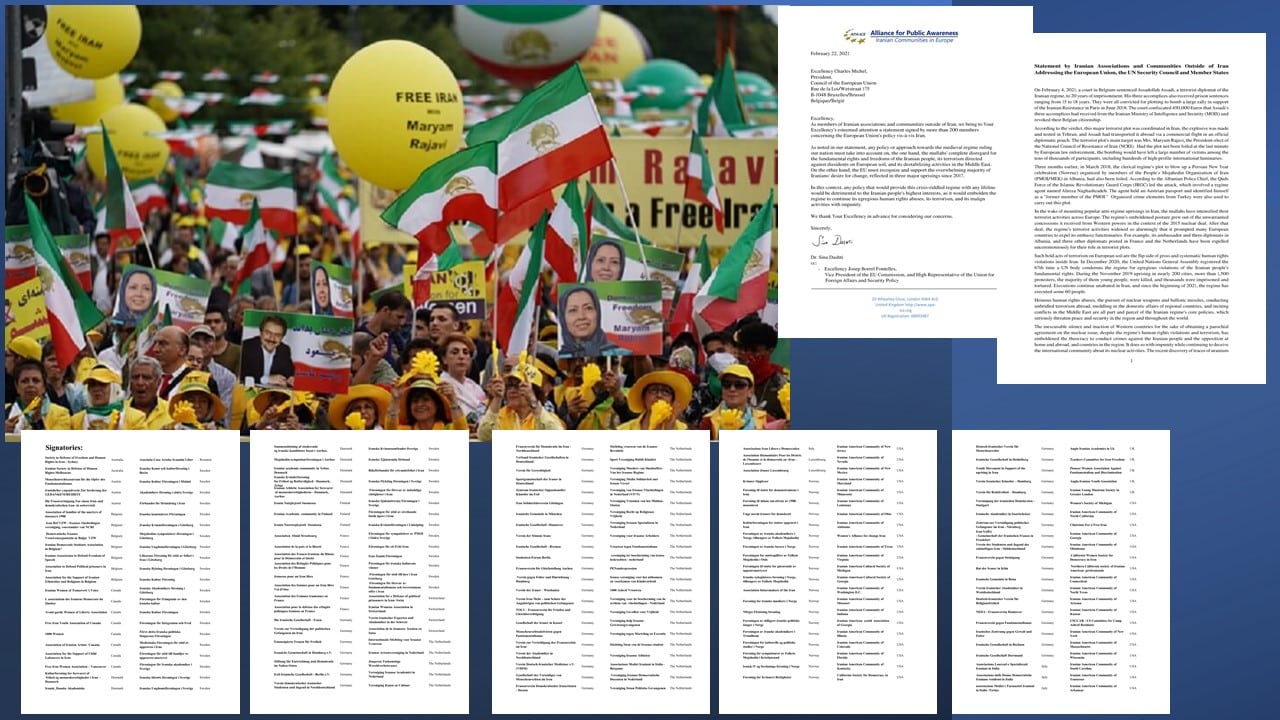 Over 200 members of the Iranian communities in Europe, known as the Alliance for Public Awareness, have written a letter to Charles Michel, President of the Council of the European Union, demanding a firm policy vis-à-vis the inhumane mullahs’ regime in Iran.

“As noted in our statement, any policy or approach towards the medieval regime ruling our nation must take into account on, the one hand, the mullahs’ complete disregard for the fundamental rights and freedoms of the Iranian people, its terrorism directed against dissidents on European soil, and its destabilizing activities in the Middle East,” the letter said in part, signed by Dr. Sina Dashti.

The full text of the letter and its accompanying statement is as follows:

As members of Iranian associations and communities outside of Iran, we bring to Your Excellency’s esteemed attention a statement signed by more than 200 members concerning the European Union’s policy vis-à-vis Iran.

As noted in our statement, any policy or approach towards the medieval regime ruling our nation must take into account on, the one hand, the mullahs’ complete disregard for the fundamental rights and freedoms of the Iranian people, its terrorism directed against dissidents on European soil, and its destabilizing activities in the Middle East.

On the other hand, the EU must recognize and support the overwhelming majority of Iranians’ desire for change, reflected in three major uprisings since 2017.

In this context, any policy that would provide this crisis-riddled regime with any lifeline would be detrimental to the Iranian people’s highest interests, as it would embolden the regime to continue its egregious human rights abuses, its terrorism, and its malign activities with impunity.

We thank Your Excellency in advance for considering our concerns. Sincerely,

Vice President of the EU Commission, and High Representative of the Union for Foreign Affairs and Security Policy

Statement by Iranian Associations and Communities Outside of Iran Addressing the European Union, the UN Security Council, and the Member States

On February 4, 2021, a court in Belgium sentenced Assadollah Assadi, a terrorist diplomat of the Iranian regime, to 20 years of imprisonment. His three accomplices also received prison sentences ranging from 15 to 18 years. They were all convicted for plotting to bomb a large rally in support of the Iranian Resistance in Paris in June 2018. The court confiscated 450,000 Euros that Assadi’s three accomplices had received from the Iranian Ministry of Intelligence and Security (MOIS) and revoked their Belgian citizenship.

According to the verdict, this major terrorist plot was coordinated in Iran, the explosive was made and tested in Tehran, and Assadi had transported it abroad via a commercial flight in an official diplomatic pouch. The terrorist plot’s main target was Mrs. Maryam Rajavi, the President-elect of the National Council of Resistance of Iran (NCRI). Had the plot not been foiled at the last minute by European law enforcement, the bombing would have left a large number of victims among the tens of thousands of participants, including hundreds of high-profile international luminaries.

Three months earlier, in March 2018, the clerical regime’s plot to blow up a Persian New Year celebration (Nowruz) organized by members of the People’s Mojahedin Organization of Iran (PMOI/MEK) in Albania, had also been foiled. According to the Albanian Police Chief, the Quds Force of the Islamic Revolutionary Guard Corps (IRGC) led the attack, which involved a regime agent named Alireza Naghashzadeh. The agent held an Austrian passport and identified himself as a “former member of the PMOI.” Organized crime elements from Turkey were also used to carry out this plot.

In the wake of mounting popular anti-regime uprisings in Iran, the mullahs have intensified their terrorist activities across Europe. The regime’s emboldened posture grew out of the unwarranted concessions it received from Western powers in the context of the 2015 nuclear deal. After that deal, the regime’s terrorist activities widened so alarmingly that it prompted many European countries to expel its embassy functionaries. For example, its ambassador and three diplomats in Albania, and three other diplomats posted in France and the Netherlands have been expelled unceremoniously for their role in terrorist plots.

Such bold acts of terrorism on European soil are the flip side of gross and systematic human rights violations inside Iran. In December 2020, the United Nations General Assembly registered the 67th time a UN body condemns the regime for egregious violations of the Iranian people’s fundamental rights. During the November 2019 uprising in nearly 200 cities, more than 1,500 protesters, the majority of them young people, were killed, and thousands were imprisoned and tortured. Executions continue unabated in Iran, and since the beginning of 2021, the regime has executed some 60 people.

Heinous human rights abuses, the pursuit of nuclear weapons and ballistic missiles, conducting unbridled terrorism abroad, meddling in the domestic affairs of regional countries, and inciting conflicts in the Middle East are all part and parcel of the Iranian regime’s core policies, which seriously threaten peace and security in the region and throughout the world.

The inexcusable silence and inaction of Western countries for the sake of obtaining a parochial agreement on the nuclear issue, despite the regime’s human rights violations and terrorism, has emboldened the theocracy to conduct crimes against the Iranian people and the opposition at home and abroad, and countries in the region. It does so with impunity while continuing to deceive the international community about its nuclear activities. The recent discovery of traces of uranium in the regime’s undeclared facilities by the International Atomic Energy Agency provides further evidence that the regime never abandoned its efforts to manufacture a nuclear weapon.

Considering these facts, Iranian associations and communities outside of Iran strongly advocate that the European Union, its member states, and the United Nations Security Council and its member states must urgently take the following necessary measures: