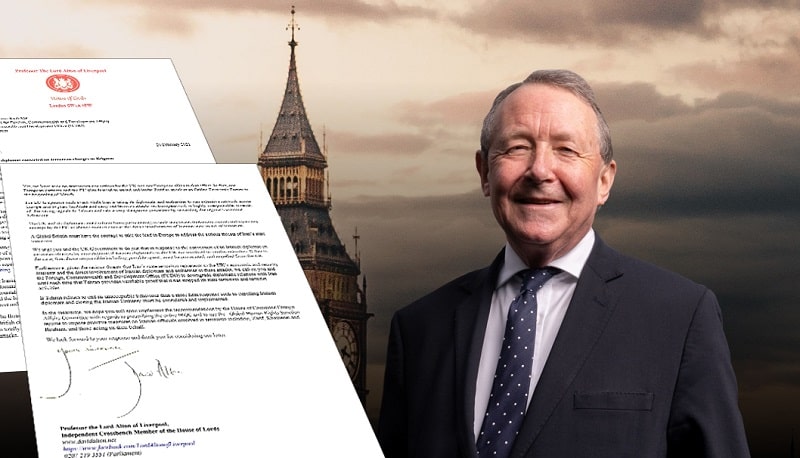 In his letter to Dominic Raab, the United Kingdom Foreign Secretary, Lord Alton of Liverpool urged the UK government to hold the Iranian regime accountable for state-sponsored terrorism, following the conviction of mullahs’ diplomat-terrorist Assadollah Assadi, who had attempted to bomb the opposition rally in 2018 in France.

“The court ruling and the pre-trial investigation show beyond any doubt that this was an act of state terrorism by the regime in Iran against the country’s organised pro-democracy opposition, the National Council Of Resistance of Iran (NCRI), by targeting their conference, leader and supporters on European soil,” reads the letter in part.

“A Global Britain must have the courage to take the lead in Europe to address the serious threats of Iran’s state terrorism,” Lord Alton adds.

The full-text of this letter is below:

RE: Iranian diplomat convicted on terrorism charges in Belgium

Several weeks has passed since the Criminal Court of Antwerp, Belgium, sentenced an Iranian diplomat Assadolah Assadi to 20 years in prison on charges of terrorism and terrorist murder. His three accomplices, a couple and a man, received between 15 and 18 years imprisonment and had their Belgian nationality withdrawn.

The court ruling and the pre-trial investigation show beyond any doubt that this was an act of state terrorism by the regime in Iran against the country’s organised pro-democracy opposition, the National Council Of Resistance of Iran (NCRI), by targeting their conference, leader and supporters on European soil.

We now know that the convicted diplomat took the explosive to Europe from Iran on a commercial flight using his diplomatic credentials. He then transported the explosive device across several European borders by car and personally handed it over to the convicted couple to bomb the NCRI conference in Paris. This means that the accredited diplomat took advantage of his diplomatic status and privileges to plan, facilitate and carry out this terrorist bombing that could have led to a bloodbath and killed many civilians and parliamentarians, including some of colleagues in the House of Commons.

Following his arrest in Germany, a notebook was confiscated in the diplomat’s car proving that he was the centre of a wider Iranian network across Europe. The notebook “meticulously detailed 289 places across 11 European countries where he is believed to have made contact with agents of the regime”, according to UK press reports. https://www.express.co.uk/news/world/1391415/iranian-spy-assadollah-assadi-germany-parisbombing

The Iranian Foreign Minister, Javad Zarif, who is responsible for the mission and conducts of the Iranian diplomats abroad, shares responsibility for the criminal conduct of Iran’s diplomats and must be held accountable for his role in this foiled terrorist bombing. This also extends to the Supreme Leader Khamenei and the Iranian President Hassan Rouhani, since the diplomat did not acted on his own accord but followed a direct order from Tehran, according to the Belgian Security Service and French Government officials.

The British Committee for Iran Freedom (BCFIF) regrets the Government’s silence on this serious threat to British citizens and Europe’s overall security. You surely agree that this behaviour and conduct by the regime is totally unacceptable and deserves a firm and immediate response in order to discourage any such future attacks.

Yet, we have seen no statements nor actions by the UK nor our European allies to that effect. In fact, our European partners and the EU plan instead to attend and invite Zarif to speak at an Online Economic Forum in the beginning of March.

For EU to sponsor such event while Iran is using its diplomats and embassies to run extensive network across Europe and to plan, facilitate and carry out terrorist attacks on European soil, is highly irresponsible. It sends all the wrong signals to Tehran and sets a very dangerous precedent by rewarding the regime’s criminal behaviour.

The UK and its diplomats must refrain from participating in such dangerous diplomatic events and reject any attempt by the EU to glance over or excuse the direct involvement of Iranian state in act of terrorism.

A Global Britain must have the courage to take the lead in Europe to address the serious threats of Iran’s state terrorism.

We urge you and the UK Government to do just that in response to the convection of an Iranian diplomat on terrorism charges by investigating if Iranian diplomats in the UK are involved in similar activities. If that is the case, then those responsible including possible agent, must be prosecuted, and expelled from the UK.

Furthermore, given the serious threats that Iran’s state terrorism represents to the UK’s economic and security interests and the direct involvement of Iranian diplomats and embassies in these attacks, we call on you and the Foreign, Commonwealth and Development Office (FCDO) to downgrade diplomatic relations with Iran until such time that Tehran provides verifiable proof that it has stopped its state terrorism and terrorist activities.

If Tehran refuses to end its unacceptable behaviour than a more firm response such as expelling Iranian diplomats and closing the Iranian Embassy must be considered and implemented.

In the meantime, we hope you will soon implement the recommendations by the House of Commons Foreign Affairs Committee with regards to proscribing the entire IRGC and to use the Global Human Rights Sanction regime to impose punitive measures on Iranian officials involved in terrorism including, Zarif, Khamenei and Rouhani, and those acting on their behalf.

We look forward to your response and thank you for considering our letter.

Professor the Lord Alton of Liverpool,
Independent Crossbench Member of the House of Lords