Round up of Iran Protests by All Walks of Life 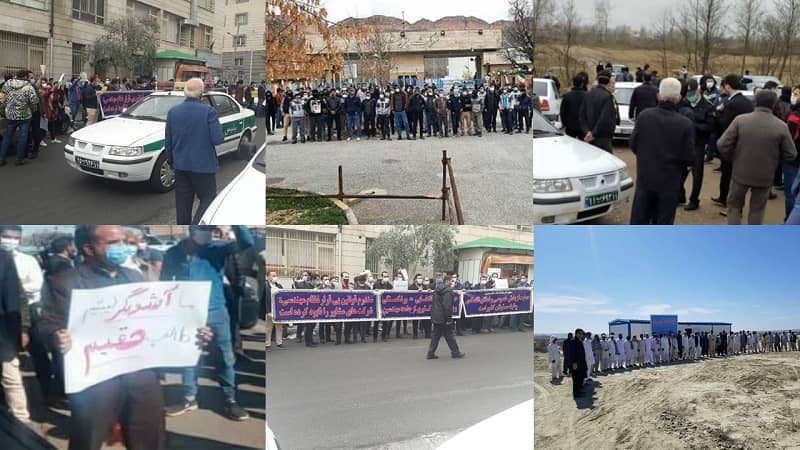 Reports by the People’s Mojahedin Organization of Iran (PMOI/MEK) indicate there have been dozens of protests by all walks of life across Iran within the last few days. These protests once again portray society’s restiveness.

On Sunday, hundreds of retirees and pensioners living on social security held rallies on 21 cities across Iran for the third consecutive week, protesting their harsh living conditions and low wages. Their pensions have not increased, while the living costs have skyrocketed.

They chanted “We won’t rest until we get our rights,” “Unity is the only way to get our rights,” and “Enough with hollow promises, enough oppression and injustice, our tables are empty.” They also underlined that the entire regime and all its officials are involved in corruption and plundering the people’s wealth, by chanting: “Neither the parliament, nor the government care about the nation,” “The judiciary has wrecked the ‘Pension Fund,’” and “The Pension Fund has been plundered.”

On Sunday, a group of HEPCO workers held a protest while holding a symbolic coffin of HEPCO in the center of Arak, near the local branch of the Social Security Organization to pursue their demands.

Heavy Equipment Production Company (HEPCO) is a corporation that manufactures construction equipment, agricultural machinery, railroad cars, trucks, forklifts and the industrial machinery of oil, gas, energy, metal and mining industries in Arak, and was once the largest heavy equipment manufacturer in the Middle East. But workers have not received their salaries for months.

Again, on Sunday, a group of project workers of Ilam Petrochemical Company gathered in front of the company in northwest Iran to protest the provisions of the recruitment method. According to the protesters, about 300 people will be recruited in the new procedure, which includes only 100 local workers, who have been working in the company for 10 to 15 years.

On Sunday, a group of school guardians in front of the regime’s Parliament (Majlis), demanding their unpaid salaries and other bonuses.

Simultaneously, a group of contract teachers gathered in front of the regime’s Parliament, demanding their rights.

On February 21, a group of emergency personnel and corporate employees in Mashhad held a rally on the campus of Mashhad University of Medical Sciences to protest the non-implementation of the Extraordinary and Productivity Promotion Law.

On Friday, a group of residents of Kacho, Gorankesh, and Plani areas in Dashtiari city in Sistan and Baluchistan province held a rally, protesting the occupation of their ancestral agricultural and residential lands by the regime to set up a steel complex.

On Thursday, a group of workers from Shahriar Municipality near Tehran held a rally in front of the city council of the regime in this city demanding their delayed wages.

On Tuesday, a number of contract teachers in Isfahan and Tehran gathered in front of the regime’s parliament and demanded the implementation of approvals and plans related to them by parliament.

On Tuesday, a number of preschool teachers in Izeh, southwest Iran, held a rally at the city’s education and training office, demanding their rights.

These protests demonstrate Iran’s explosive state. Thus, many state-run media and officials warn one another of another uprising, much larger than the one in November 2019, which rattled the regime’s foundations.

“All problems will open their mouths at one time, and on the day when the tolerance of the majority of the society, the workers, is over and their patience is exhausted, we will not see good results,” wrote the state-run Arman on February 15 in this regard.