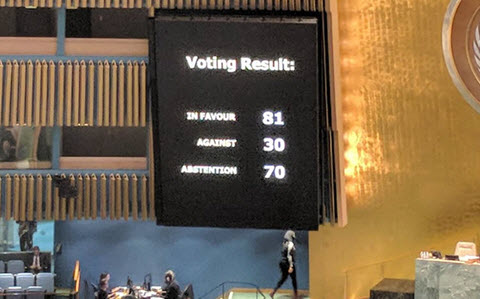 The resolution, sponsored by Canada, was adopted on December 19 with 81 votes for, 30 against, and 70 abstentions.

This new resolution welcomes the minor improvements that Iran has made- although considering the timing of the small amendments to their death penalty, it is likely that the Regime only did this to gain approval from the UN.

It also expresses concern about the extent that the death penalty is used- particularly for juveniles, the rate of forced confessions, and the number of falsely imprisoned dual nationals and foreigners.

The resolution urges Iran “to uphold, in law and in practice procedural guarantees to ensure fair trial standards, including timely access to legal representation of one’s choice from the time of arrest through all stages of trial and all appeals, the right not to be subjected to torture, cruel and inhuman or degrading treatment or punishment and consideration of bail and other reasonable terms for release from custody pending trial.”

Reportedly, the only country that protested the adoption of the resolution was Syria, which is unsurprising when you consider that the Iranian Regime is helping to prop up the Assad dictatorship in Syria.

The resolution also included some paragraphs about human rights issues in Syria, North Korea, and the Crimean Peninsula, which were ratified along with the main body of the resolution.
While a member of the Iranian delegation to the UN, Mohammad Hassan Nejad Pirkoohi, protested the resolution’s condemnation of Syria and North Korea, according to Regime-affiliated the Fars news agency.

Hassan Nayeb Hashem, an Iranian human rights activist, tweeted: “The resolution concerning the situation of human rights in Iran was adopted with a very high margin at the United Nations General Assembly.”

Canada’s Foreign Ministry also welcomed the news via Twitter, and promised to continue their support for human rights in Iran.

The news of this resolution has been mentioned on Iranian news agencies but they have provided very little information about it.

Members of the Iranian Regime have yet to respond, with the exception of Pirkoohi who described its adoption as regretful.

From sponsorship to adoption

The draft of this resolution criticising Iran’s human rights record was approved on November 24 by the Third Committee of UNGA by a vote of 83 to 30.

The countries who abstained overwhelming criticised Iran for its human rights abuses but wanted to encourage Iran to cooperate with the UN in making improvements.

During this session, the Iranian delegation did not respond to any of the issues highlighted but did attack Canada for sponsoring the resolution, calling it “a politicized document” and signalling that Iran may not cooperate with the UN on human rights.

In 2016, the UNGA passed a similar resolution, with an almost identical voting record.

Resolutions adopted by UNGA are non-binding.

Previous articleRe-Firing Missile at Riyadh, Iran Regime’s Urgent Need of Warmongering and the Necessity of a Decisive Policy
Next articleMagnitude 5.2 Tremor Hits Near Iran’s Capital