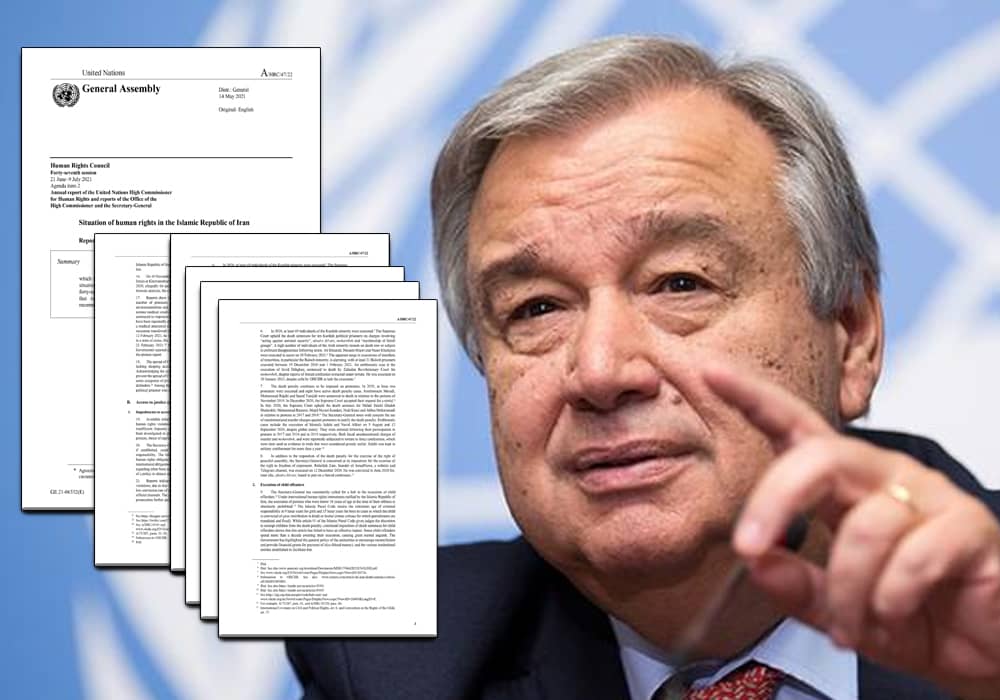 In his annual recent report to the United Nations Human Rights Council, UN Chief Antonio Guterres underlined the dire human rights situation in Iran. The report, which originally dates May 14, 2021, was published on June 9, 2021.

“Prisoners of conscience, political activists, human rights defenders, and lawyers are disproportionately excluded from temporary release.49 Some political prisoners have been in prison for years without a single day of furlough. For example, Maryam Akbari Monfared, who was sentenced to 15 years imprisonment for participating in protests in 2009, has been imprisoned for the past 12 years,” the report reads in part, shedding light on the plight of Maryam Akbari Monfared. Ms. Akbari Monfared’s sister and brother were executed in the 1988 massacre of 30,000 political prisoners.

“Harassment against her increased after she filed a formal complaint, seeking official investigation into the 1988 executions of political prisoners, including her siblings.50 Similarly, Zeinab Jalalian, a Kurdish political prisoner serving a life sentence for moharebeh, has been held in prison since 2008 without furlough,” the report adds.

“Long pretrial detention is common. Under article 242 of the Code of Criminal Procedure, pretrial detention for up to two years in certain cases. Students Ali Younesi and Amirhossein Moradi have remained in pretrial detention since their arrest in April 2020, including periods of solitary confinement. 32 In November 2020, the Working Group on Arbitrary Detention expressed concern that the high number of cases in which it had found the Islamic Republic of Iran in violation of its international human rights obligations indicated widespread or systemic arbitrary detention,” the report adds in another part.

“The Secretary-General notes with concern the use of unsubstantiated murder charges against protesters to justify the death penalty. Emblematic cases include the execution of Mostafa Salehi and Navid Afkari on 5 August and 12 September 2020, despite a global outcry. They were arrested following their participation in protests in 2017 and 2018 and in 2019 respectively. Both faced unsubstantiated charges of murder and moharebeh, and were reportedly subjected to torture to force confessions, which were later used as evidence in trials that were considered grossly unfair. Salehi was kept in solitary confinement for more than a year,” the report adds.

The recent report of the UN Secretary-General underlines the need for the international community to act immediately and address the Iranian regime’s ongoing human rights violation. The human rights violations will increase after the regime’s sham presidential election since all development shows that the regime’s supreme leader, Ali Khamenei, has paved the way for the current judiciary chief Ebrahim Raisi to become president. Raisi played a key part in the 1988 massacre.