June 12 marks the World Day Against Child Labor, but for the Iranian labor children, it is another day of a miserable life under the mullahs’ regime.

The Center for Statistics and Strategic Information of the Iranian regime’s Ministry of Labor announced the existence of half a million working children in Iran, according to surveys in 2017. There have been different statistics on the number of street children and child laborers in Iran. But according to the same report, the number of working children has increased by 11.5 percent in comparison to 2015.

The state-run Resalat daily, in an article on June 29, 2019, wrote: “We have around 17 million children under the age of 18. Out of this number, 14 million are going to school. The question is: What are the other three million children doing? According to a study by a faculty member at the University of Tehran in 2002, the number of working children in Iran at that time was estimated at between 3 and 7 million.”

The street and labor children in Iran are the most vulnerable section of society. They are forced to work amid the outbreak. Yet instead of helping them using the regime’s vast resources, officials blaming these poor children for the spread of COVID-19. One of the members of the theocratic regime’s parliamentary commission on health has called these child laborers “the most important source of transmission of the coronavirus.”

While the regime takes no action for helping these children, it is worth noting that the regime signed the UN Convention on the Rights of the Child in 1991 and ratified it in 1994. In fact, the state-run IRNA news agency wrote in an article on June 1, that the problem of working children is not one of the regime’s priorities.

Due to the regime’s institutionalized corruption and wasting national wealth on its nuclear and missile programs, terrorism, and oppression, the Iranian economy is in a freefall. More citizens are joining the army of starving people, and the coronavirus outbreak in Iran has expedited this process.

Majlis Research Center: #Iran’s Economy in Freefall and Reaching Destruction
The country’s dire economic situation and all kinds of severe crises result from widespread corruption and the rule of the religious dictatorship. #IranProtests https://t.co/wD9AvTjZiR

Thousands of Iranian street and labor children, who are their families’ breadwinners, are selling chewing gum, flowers, etc. or clean car windows and mostly are garbage scavengers. This is amid the coronavirus outbreak, which rapidly spread across Iran due to the regime’s inaction and cover–up and which has so far claimed the lives of over 60,000 people.

The Iranian street and labor children are subjected to harassment and systematic abuse by the regime’s officials. The state-run Ebtekar daily, in an article on June 12, 2019, while confirming that Tehran’s municipality profits from the work of child garbage scavengers, wrote: “Tehran’s Municipality has rented out the garbage collection process [to the state-mafia] for 200 billion tomans. It is estimated that about 1 to 1.5 times of this amount is to the contractors’ benefit. The next rank belongs to the master or employer. In the last ring of this cycle, there are the garbage collecting children.” In other words, these children are slaves.

The state-run Tinews, in an article about the labor children in June 2019, wrote: “According to a study conducted by the governmental Association for the Protection of Children’s Rights in Tehran, the share of these children in the total value of recyclable waste in Tehran is less than 3%. About 4,700 children in the city are involved in garbage collection. Jobs in which they have no social support. More than 70 percent of these children have been abused in some way.” 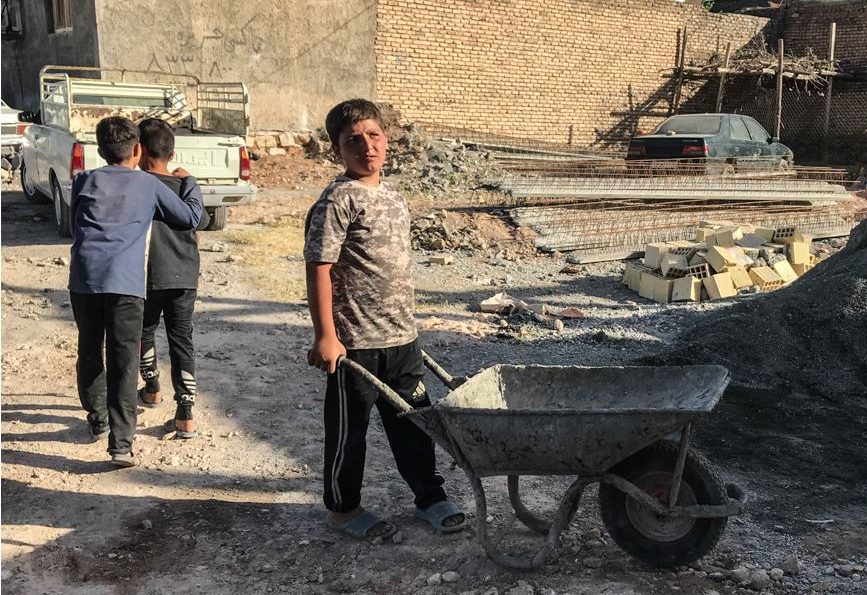 The existence of labor and street children in a society indicates the state of that society. The existence of child laborers is also an indicator for understanding the state of a government and its achievements and claims. In addition, having a working child means that there is a father who is sick or addicted at home; or a deprived mother, therefore, the child is forced to work; or the whole family is working on the street.

In a nutshell, the Iranian children, particularly labor and street children are under tremendous pressures and unlike children in other countries, they are not experiencing the joy of a real childhood.

These pressures have resulted in children committing suicide. In this regard, the case of Armin, an 11– year–old boy who took his own life, is very much shocking. Armin who was living in Jafarabad neighborhood of Kermanshah, northwest Iran, with the highest number of working children in this province due to poverty and hunger, took a suicide pill earlier this week.

A social worker of the Imam Ali Social group describe Armin’s life: “After the death of Armin’s mother, for a long time, members of our group used to go to Armin’s house with hot food every day because of the closure of Jafarabad’s “Iranian House” due to the coronavirus outbreak (a place for educational, artistic and child protection classes). And they testified that there was not even a spoon for eating food in the house, let alone the hope of cooking.”

Iran is among the richest countries in the world in terms of natural resources, but the regime has deprived Iranian people of having a decent life. The regime’s approach toward Iranian labor children is the same as the mullahs’ criminal act of sending thousands of Iranian children to the frontlines to sweep minefields during the Iran-Iraq war.

Yet, the situation of the Iranian children is another aspect of the deprived yet restive Iranian society. In other words, working children are indicators of an explosive society. This problem won’t be resolved as long as the regime is in power.

In this regard, Navid Masaeli, a regime expert, told state television on May 16, 2020: “These working children are indeed like a grenade, enlarged and on the verge of explosion.”