Youths in Ardabil condemn 1988 massacre of political prisoners in Iran 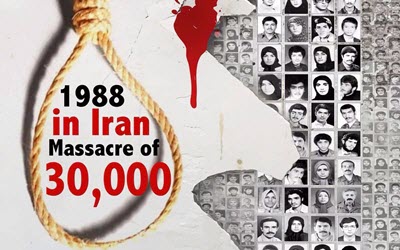 The victims of the 1988 massacre were mainly affiliated to the main Iranian opposition group People’s Mojahedin Organization of Iran (PMOI or MEK).

In a statement this week, the group of youths from Ardabil said:

We mark the anniversary of the bloody massacre, ordered by [Khomeini] and carried out by the officials of the mullahs’ regime who are currently in power, in which 30,000 of our loved ones were executed.

These days we witness how the [former] heir of Khomeini, [Hossein Ali] Montazeri called these massacres a crimes against humanity. His remarks have been captured on audio tape, and yet we see that with each passing day and hour the children of this imprisoned nation are being hanged and executed. We also witness that the regime is engulfed in domestic and foreign crises in the wake of its [nuclear agreement].

These inhumane actions of Iran’s regime are a great test for the international community which ought to react properly to the brutality of this regime.

We the freedom-loving youths of Ardabil demand the prosecution of the perpetrators of this massacre in international courts.

We will neither forget, nor forgive such crimes.

Peace be upon the martyrs of freedom.

Down with the principle of Velayat-e Faqih (clerical rule).”

In the summer of 1988, the Iranian regime summarily and extra-judicially executed 30,000 political prisoners held in jails across Iran. This massacre was carried out on the basis of a fatwa by Khomeini. The Iranian regime has never acknowledged these executions or provided any information as to how many prisoners were killed. In the summer of 1988, the mullahs’ regime massacred some 30,000 political prisoners in Iran.

A shocking audio recording was published this week for the first time of Khomeini’s former heir-apparent, Hossein-Ali Montazeri, acknowledging the brutal nationwide massacre in Iran in 1988 of activists of the PMOI (MEK).