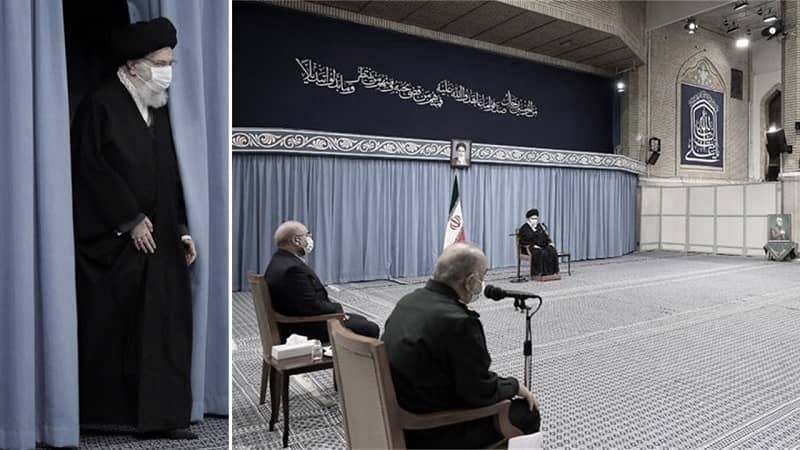 After a month, on Wednesday, December 16, Iran’s regime Supreme Leader, Ali Khamenei, appeared in public in a meeting with some officials and the family of Qassem Soleimani, ex-commander of the Revolutionary Guards (IRGC) Quds Force, near the first anniversary of Soleimani’s elimination.

In his previous speech on November 24, Khamenei had said that the regime’s officials should neutralize sanctions and do not pursue “lifting” them. While reiterating his order on November 24 of neutralizing sanctions, he said on Wednesday, “I do not say ‘don’t try to lift sanctions.’ If we could get rid of sanctions, we should not delay even an hour.”

Thus, he portrayed his regime’s paradox, Khamenei knows the system suffers from economic suffocation. According to the state-run Vatan-e Emrooz daily on December 13, it is in “the worst inflation and living conditions after the revolution, according to economic statistics.”

If not handled properly, this situation will result in an uprising much larger than the one in November 2019. Because, according to the semi-official ISNA news agency on December 11, “Exhaustive living conditions with public discontent and distrust have severely reduced social resilience.”

What is the regime’s deadlock?

The nationwide Iran protests in November 2019 and the elimination of Qassem Soleimani changed the balance of power and made the Iranian people’s hatred of the regime and the system’s weakness visible.

While the regime hallucinates about the Western policymakers’ appeasement, it is aware that any negotiations will have a cost. Due to its nature, the regime cannot stop its warmongering machine, producing ballistic missiles and exporting terrorism abroad. Stopping its terrorist activities and regional adventurism is what many regime officials described as “suiciding out of fear of death.”

The main levers of the regime’s policy of exporting crisis are its nuclear weapons and ballistic missiles program, regional interventions, and terrorism. The path of “negotiation” also precisely targets these levers, which will be a blow to the clerical regime’s very foundations.

Germany’s Foreign Minister, Heiko Maas, on December 4, said: “We have clear expectations for Iran: no nuclear weapons, but also no ballistic rocket program which threatens the whole region.” He added that the European powers “distrust” the regime.

The second component of the regime’s deadlock is its economic suffocation and a looming uprising by the army of starving people. The regime has no intention of helping poor Iranians. The regime’s poor management of the economy and the Covid-19 crisis are testaments to this fact.

The rising social hatred demonstrated by daily protests across Iran has increased the regime’s infightings. They indicate it has no solution for the country’s ongoing crises because each faction tries to blame the other for people’s hardships without offering a solution.

Khamenei warned: “The officials should not destroy the unity and unanimity [in the system] and dismember [the system].” He continued, “There may be differences. Resolve these differences through negotiation.”

But he quickly attacked the rival faction led by his president, Hassan Rouhani, and mocked Rouhani’s empty gest of “negotiations” with the international community, which means Rouhani’s desperate attempts to revive the appeasement policy.

“Don’t they say we should negotiate with the world? Is it possible to negotiate and resolve the dispute with the internal elements?” Khamenei said.

Khamenei’s remarks were supposed to cherish and promote unity in the regime. But, they further showed the regime’s paradox, deadlock, and the depth of its crises. They also showed Khamenei struggle to control his regime’s crises, even for a short time.