During the summer of 1988 massacre, the Iranian regime’s authorities forcefully disappeared and massacred over 30,000 political prisoners. Most of the victims were members and supporters of the People’s Mojahedin Organization of Iran (PMOI/MEK).

The Iranian Resistance started a Justice Seeking Movement in 1988 and has since tried to mobilize the international community to hold the regime to account for this crime against humanity. This movement reached a new height in 2016 due to the efforts of Mrs. Maryam Rajavi, the opposition president-elect, who called for an international investigation into this heinous crime.

Below are highlights of the international attention to the 1988 massacre within the last three years.

Seven United Nations human rights experts have written a letter to Iran’s regime pointing out that the 1988 massacre of thousands of political prisoners could amount to “crimes against humanity.”

The letter by the Special Rapporteurs, dated September 3, 2020, was made public by the United Nations on December 9, 2020.

It calls on the Iranian regime to prosecute the perpetrators of the 1988 massacre. It adds that if Tehran continues to refuse to uphold its obligations under international human rights law, the UN experts call on the international community to launch its own investigation into the massacre “including through the establishment of an international investigation.” 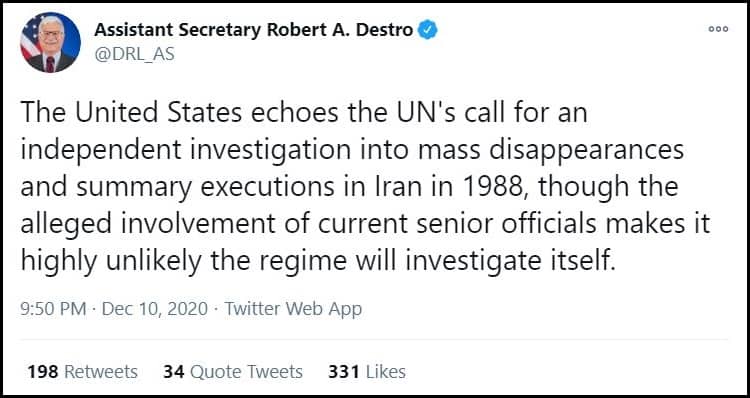 Assistant Secretary Robert A. Destro, the United States Department of State’s Assistant Secretary of State for Democracy, Human Rights, and Labor, underlined his government’s support for the call for justice for the victims of the 1988 massacre in Iran, made by UN Special Rapporteurs.

U.S. State Department spokesperson Morgan Ortagus on 17 July 2020 called on the international community to conduct independent investigations into the 1988 massacre and to provide accountability and justice. She said: “July 19th marks the anniversary of the start of Iran’s so-called ‘Death Commissions.’ On the orders of Ayatollah Khomeini, these commissions reportedly forcibly disappeared, and extrajudicially executed, thousands of political dissident prisoners. The current head of the Iranian Judiciary and current Minister of Justice have both been identified as former members of these ‘Death Commissions.’ The Iranian Judiciary is widely perceived to lack independence and fair trial guarantees, and the Revolutionary Courts are particularly egregious in ordering violations of human rights. All Iranian officials who commit human rights violations or abuses should be held accountable. The United States calls on the international community to conduct independent investigations and to provide accountability and justice for the victims of these horrendous violations of human rights organized by the Iranian regime.”

US: Enforced Disappearances Related To 1988 Massacre Continue Unabated in Iran 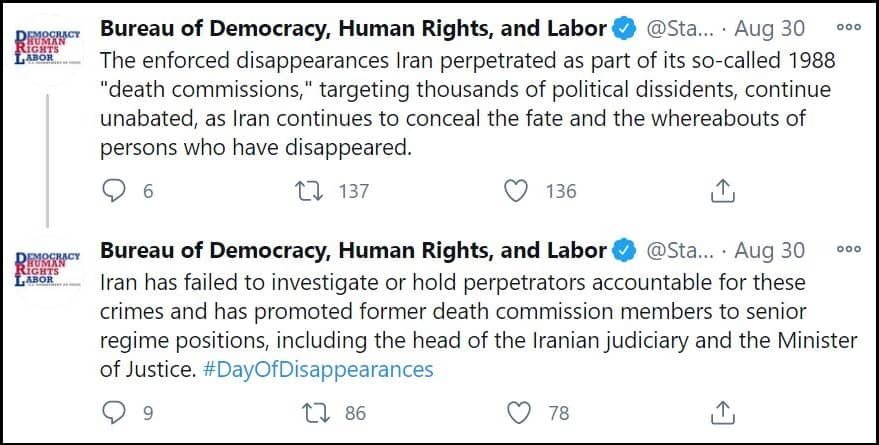 The enforced disappearances of thousands of political dissidents perpetrated by the government of Iran, in what became known as the 1988 massacre, continue unabated, as Iran continues to conceal the fate and the whereabouts of the victims, the U.S. State Department announced on August 30, 2020.

The US State Department’s Bureau of Democracy, Human Rights, and Labor said in a Tweet: “The enforced disappearances Iran perpetrated as part of its so-called 1988 “death commissions,” targeting thousands of political dissidents, continue unabated, as Iran continues to conceal the fate and the whereabouts of persons who have disappeared.” 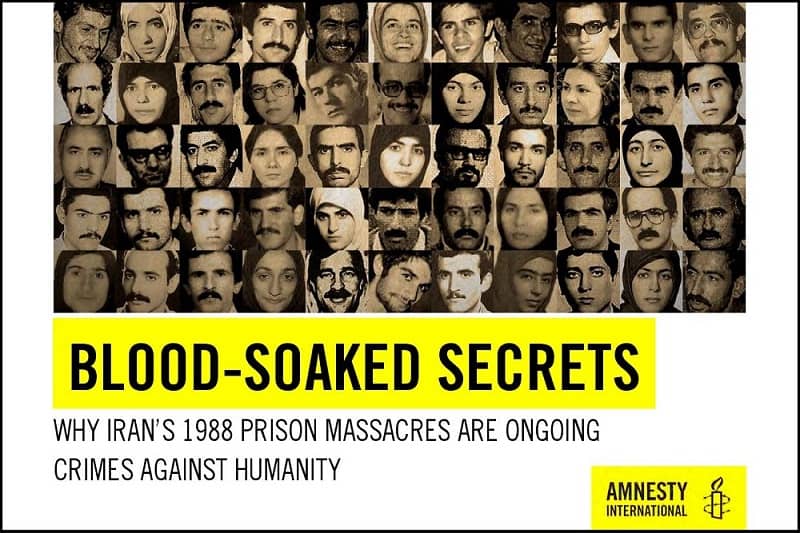 Amnesty International published a detailed report on December 4, 2018, after interviewing many of the 1988 massacre survivors and family members of the victims. This report was titled as “Blood-Soaked Secrets.”

“Between July and September 1988, the Iranian authorities forcibly disappeared and extrajudicially executed thousands of imprisoned political dissidents in secret and dumped their bodies, mostly in unmarked mass graves. Since then, the authorities have treated the killings as state secrets, tormenting the relatives by refusing to tell them how and why their loved ones were killed and where they are buried. No official has been brought to justice and, in some cases, those involved hold or have held positions of power in Iran. This report calls on the UN to set up an independent investigation to help bring those responsible for these abhorrent crimes to justice,” read the report. 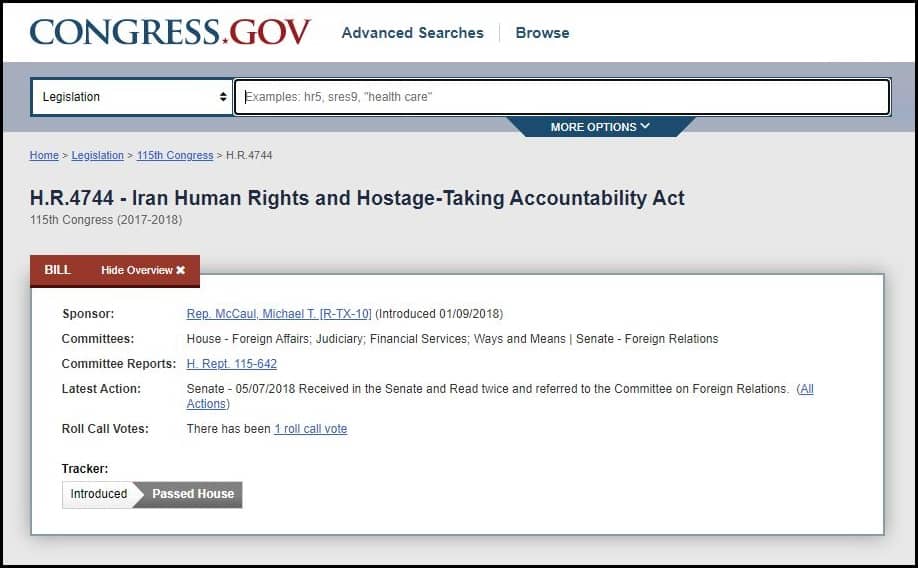 The United States House of Representatives on 26 April 2018 passed the Iran Human Rights and Hostage-Taking Accountability Act (H.R. 4744). The text refers to the 1988 massacre of thousands of political prisoners in Iran

Paragraph 7 of Section 2, subsection (a) states: Over a 4-month period in 1988, the Iranian regime carried out the barbaric mass executions of thousands of political prisoners by hanging and firing squad for refusing to renounce their political affiliations and in some cases for possessing political reading material, including prisoners of conscience, teenagers, and pregnant women. In a recently disclosed audiotape, the late Hussein Ali Montazeri, a grand ayatollah who served as former Supreme leader Khomeini’s chief deputy, said that the 1988 mass killings were “the greatest crime committed during the Islamic Republic, for which history will condemn us”.

On 1 February 2018, a civil society hearing in Geneva heard witnesses and legal experts and offered an adjudication of the 1988 massacre of political prisoners in Iran.  The hearing was the first of its kind by NGOs in Geneva, and it urged immediate action by the United Nations to address the current wave of mass arrests and killings in Iranian jails following the recent anti-government protests. 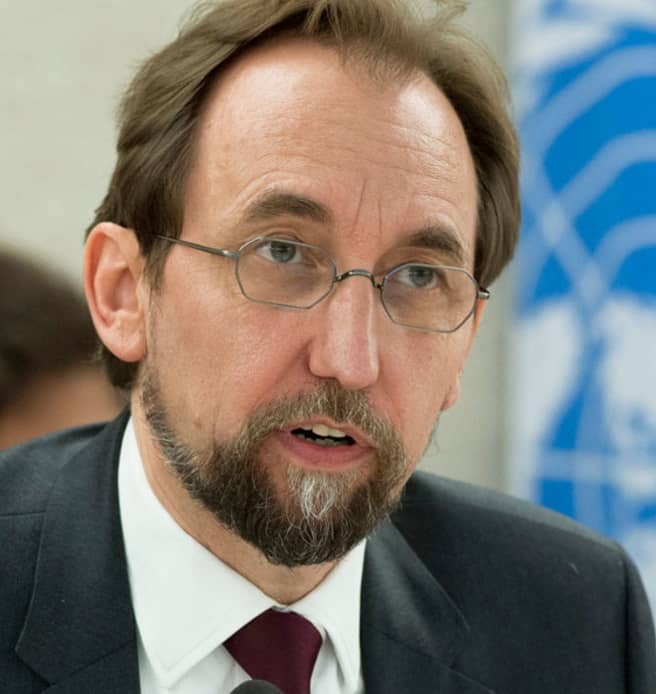 Zeid Ra’ad Al Hussein, then UN High Commissioner for Human Rights, said that he had asked his office to conduct a deeper investigation into the 1988 massacre of political prisoners in Iran.

Taking questions via a Twitter Question and Answer session on 10 December 2017 to mark International Human Rights Day, the High Commissioner said that he had recently been briefed on the issue. 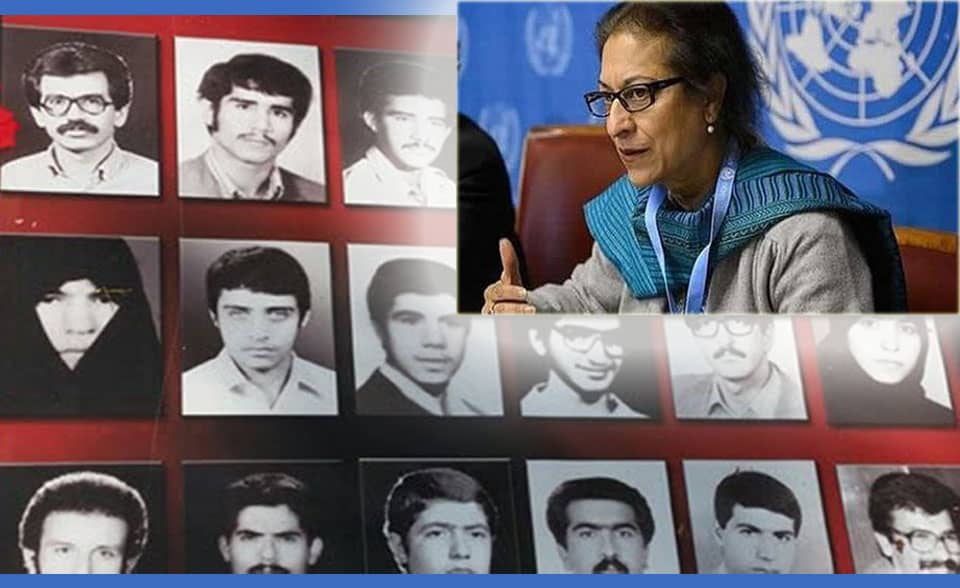 The former Special Rapporteur on the situation of human rights in the Islamic Republic of Iran has in her latest report made numerous references to the 1988 massacre of political prisoners in Iran, pointing out that the families of the victims have a right to know the truth about these events and the fate of their loved ones without risking reprisal.

The report by late Asma Jahangir (A/72/322) was transmitted to the UN General Assembly by Secretary-General António Guterres on 14 August 2017.

“Between July and August 1988, thousands of political prisoners, men, women and teen-agers, were reportedly executed pursuant to a fatwa issued by the then Supreme Leader, Ayatollah Khomeini. A three-man commission was reportedly created with a view to determining who should be executed. The bodies of the victims were reportedly buried in unmarked graves and their families never informed of their whereabouts. These events, known as the 1988 massacres, have never been officially acknowledged. In January 1989, the Special Representative of the Commission on Human Rights on the situation of human rights in the Islamic Republic of Iran, Reynaldo Galindo Pohl, expressed concern over the ‘global denial’ of the executions and called on Iranian authorities to conduct an investigation. Such an investigation has yet to be undertaken,” read the report in part. 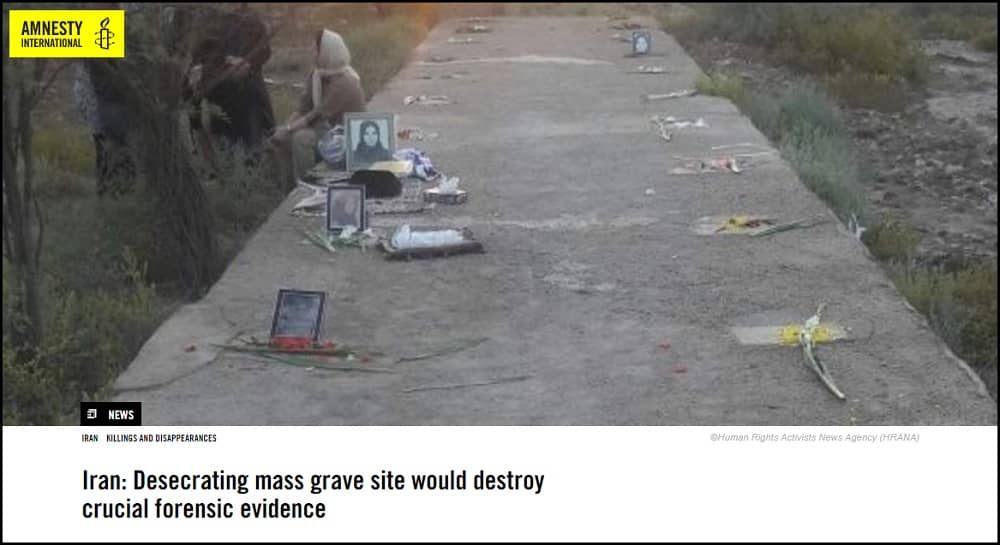 In an announcement on June 1, 2017, Amnesty International warned of the Iranian regime’s desecration of a mass grave site in Ahvaz, southern Iran.

According to Amnesty, “at least 44 people who were extrajudicially executed” are buried in this grave site.  Amnesty warned that desecration of this mass grave site “would destroy vital forensic evidence and scupper opportunities for justice for the mass prisoner killings that took place across the country in 1988, said Amnesty International and Justice for Iran.” 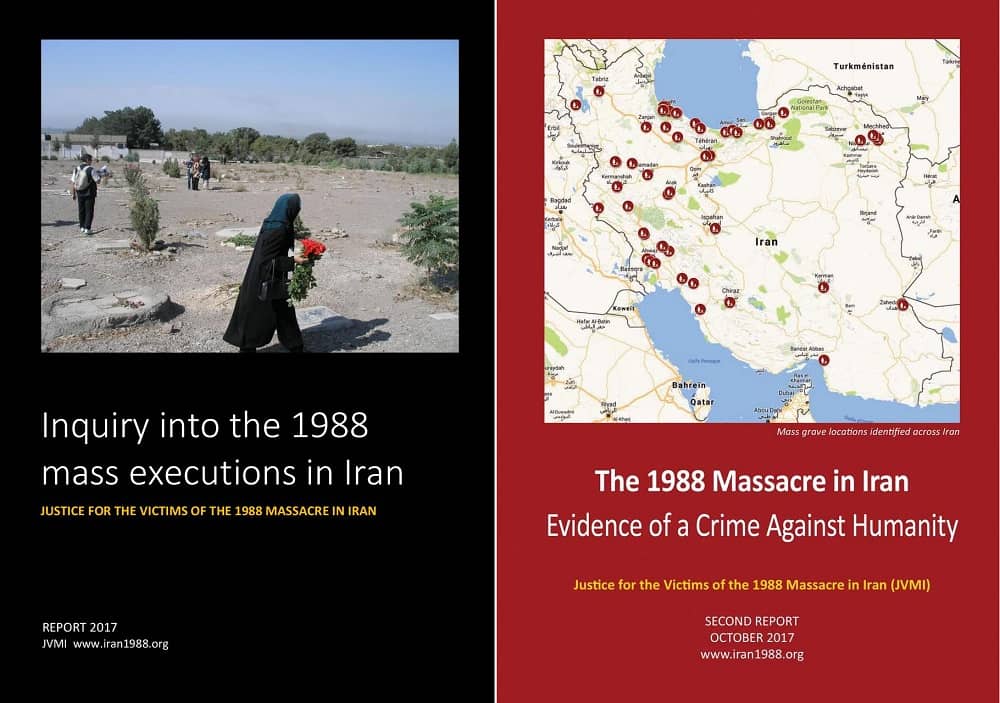 The Justice for Victims of 1988 Massacre in Iran (JVMI), a non-profit center for research and documentation recently established in London which operates internationally, has published three detailed reports, containing evidence of the 1988 massacre. “Inquiry into the 1988 mass executions in Iran” and “1988 Massacre in Iran: Evidence of a Crime Against Humanity,” published in March and October 2017 respectively, are the reports by the JVMI.