A Unified Congressional Front Against the Iranian Regime 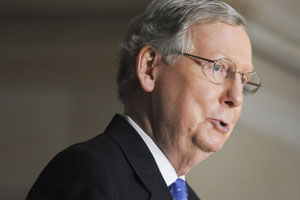 The Senate voted 99-0 to extend economic sanctions against the Islamic Republic of Iran for ten years, Breitbart, the US news site, reported. Only one Senator was absent for Thursday’s vote. The bill passed the House 419-to-1.

Senate Majority Leader, Mitch McConnell was quoted as saying, “Given Iran’s continued pattern of aggression and the country’s persistent efforts to expand its sphere of influence across the region, preserving these sanctions is critical.” He continued, “the current administration has been hostage by Iran’s threats – by Tehran’s threat to withdraw from the nuclear agreement and how it ignored Iran’s overall efforts to upset the balance of power in the greater Middle East.” McConnell said President-elect Trump would be more attentive to the dangers Iran poses to America’s national security.

A member of the Senate Foreign Relations Committee, Senator David Perdue said, “President Obama never should have waived key sanctions on Iran. “Before the ink was dry on his dangerous nuclear deal, the rogue nation test-fired ballistic missiles and accumulated excess heavy water, which could be used for making plutonium bombs.”

In addition, Perdue commented, “Iran has continued to threaten our strategic allies in the Middle East and weaponized terrorist groups across the volatile region. Today, we took action to reauthorize key sanctions, giving President-elect Trump a full menu of options to implement against Iran for any future transgressions.”

The united Congressional front against the current Iranian policy was illustrated, Breitbart said, by the remarks of Senator Richard Blumenthal, a loyal Democrat. Blumenthal said, in urging support for the measure, “It’s critical step toward deterring and impeding support of Iran’s development of conventional weapons and weapons of mass destruction.”

Previous article
Despite the Lifting of Sanctions, Why Iran’s Economy Has Plunged Into Recession? – Part 2
Next article
Iran: Students’ Protests in Various Cities on the Occasion of ‘Student Day’