Despite the Lifting of Sanctions, Why Iran’s Economy Has Plunged Into Recession? – Part 2 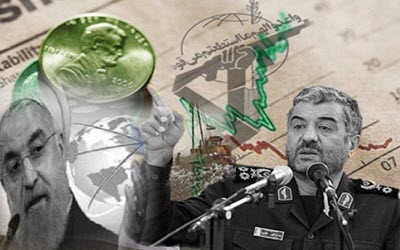 NCRI – A year after signing the nuclear deal, while significant problems such as export restrictions and the prohibition of the international bank transfer (swift) have been resolved a transparent atmosphere is created to identify the radical economic problems of Iran.

In part one, to answer the main question: “why the recession is becoming deeper while the sanctions are lifted and the international transaction with Iran has been opened.” We started with examining ‘Internal issues’ like, ‘the lack of security and stability’ and the domination of the Guardianship of the Islamic Jurist in the country, the following is Part 2.

B. The power struggle

The large gap in power, the prospect of Khamenei’s death and the succession dispute, which has been accentuated two times by Khamenei, has created an unstable political situation for the regime. Simultaneously, the shadow of Presidential Election that is scheduled to be held in the spring of 2017, has drastically affected the economy of the country.

The disclosure of payroll records of the bank managers, insurance companies, and the government seniors revealed that their salaries reach to hundred thousand dollars each. These issues although characterize the chronic corruption in regime’s bureaucracy but in fact is a manifestation of the power struggle between the two factions of the regime.

The detention of director of the largest bank of Iran ‘Mellat Bank’ by the Iranian Revolutionary Guards. The formal request by the Revolutionary Court to pass the life imprisonment sentence against the brother of regime’s President Hassan Rouhani and so on. Are the issues which have foreclosed an assuring atmosphere for any economic activities.

This struggle is also going on in the field of economic dealings. Signing new oil contracts by the government is turned into a battleground, between military and political forces. The military commanders believe that the Ministry of Petroleum has ignored the national security and the right of ownership of these contracts while the Minister of Petroleum, Bijan Zangeneh states that his opponents are worried about losing their own benefits.

The Minister of Petroleum started his tenure by sacking a wide range of managers since he took the office. He immediately dismissed 60 directors and assigned his former colleagues into office.

The government’s approach, especially in the field of oil and related industries, was opposed strongly by the IRGC with its affiliated political groups. Some MPs intended to reopen the controversial Crescent oil contract in which Bijan Zangeneh had a significant role in previous years.
The dispute continued to an extent that Bijan Zangene implicitly stated that he would voluntarily resign from the Oil Ministry by the end of the current government.

In order to make a concession to the Iranian Revolutionary Guards, the government has assigned one of the senior commanders, Rostam Ghasemi as the vice president. He is the former head of a giant contracting cartel of Khatam Brigade. Nevertheless, on February 1, 2016, the government decided to dismiss Rostam Ghasemi since he actively prevented the implementation of oil contracts. Two days earlier, a number of IRGC and Basij forces rallied in front of the Ministry of Petroleum and protested against the new agreements on oil projects which have been signed between Iran and the West.38 protesters were arrested and then released.

It was clear that the oil contracts are the centre of dispute between the sides. After several months, Rouhani’s government finally surrendered and approved the Persian Oil Company (the subdivision of Khamenei’s foundations) and Khatam Brigade as the Iranian companies which partake with foreign companies in new oil contracts.

In June 2016, Rouhani gave another concession to the IRGC for handing over 50 development projects to Khatam Brigade.

Previous article
Iran: The Internet Contributes to Rebellion and Attraction to the MEK
Next article
A Unified Congressional Front Against the Iranian Regime