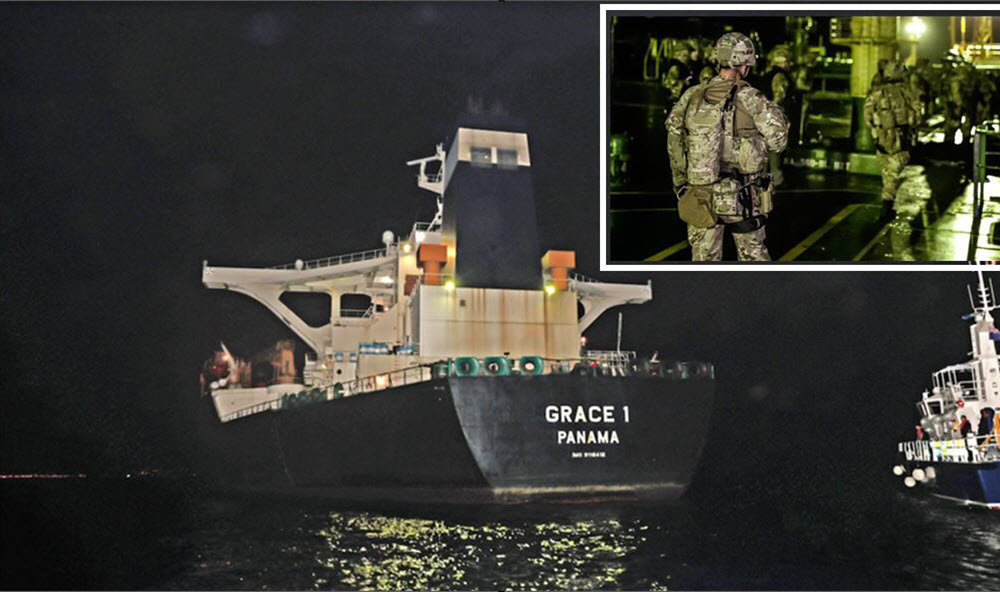 British Royal Marines seized a giant oil tanker belonging to the Iranian regime in Gibraltar on Thursday for trying to take oil to Syria in violation of European Union sanctions.

The Grace 1 tanker was impounded in the British territory on the southern tip of Spain after sailing around Africa, the long route from the Middle East to the mouth of the Mediterranean.

The Iranian regime’s Foreign Ministry summoned the British ambassador to voice “its very strong objection to the illegal and unacceptable seizure” of its ship. The diplomatic gesture lifted any doubt over the Iranian regime’s ownership of the vessel, which flies a Panama flag and is listed as managed by a company in Singapore.

Following the seizure Panama’s Maritime Authority said on Thursday that Grace 1 was no longer listed in Panama’s international boat registry as of May 29.

The Panamanian authority added that Grace 1 had been de-listed after receiving an alert indicating that the ship had participated in or was linked to terrorism financing.

White House national security adviser John Bolton on Thursday welcomed Britain’s seizure of the oil tanker, saying the U.S. and its allies will continue to prevent the Syrian and Iranian regimes “from profiting off this illicit trade.”

Bolton said in a tweet: “Excellent news: UK has detained the supertanker Grace I laden with Iranian oil bound for Syria in violation of EU sanctions. America & our allies will continue to prevent regimes in Tehran & Damascus from profiting off this illicit trade.”

Excellent news: UK has detained the supertanker Grace I laden with Iranian oil bound for Syria in violation of EU sanctions. America & our allies will continue to prevent regimes in Tehran & Damascus from profiting off this illicit trade.

Shipping data reviewed by Reuters suggests the tanker was carrying Iranian oil loaded off the coast of Iran, although its documents say the oil is from neighboring Iraq.

While Europe has banned oil shipments to Syria since 2011, it had never seized a tanker at sea.

But the Iranian regime’s acknowledgment that it owned the ship, and the likelihood that its cargo was also Iranian, drew a link between the incident and a new U.S. effort to halt all global sales of Iranian crude, Reuters wrote.

The Gibraltar government said it had reasonable grounds to believe that the Grace 1 was carrying crude oil to the Baniyas refinery in Syria.

“That refinery is the property of an entity that is subject to European Union sanctions against Syria,” Gibraltar Chief Minister Fabian Picardo said. “With my consent, our port and law enforcement agencies sought the assistance of the Royal Marines in carrying out this operation.”

Earlier this year, Reuters revealed that the Grace 1 was one of four tankers involved in shipping Iranian fuel oil to Singapore and China, violating U.S. sanctions.

The 300,000-tonne tanker is registered as being managed by Singapore-based IShips Management Pte Ltd.

It was documented as loading fuel oil in the Iraqi port of Basra in December, though Basra did not list it as being in port and its tracking system was switched off. The tanker reappeared on tracking maps near Iran’s port of Bandar Assalyeh, fully loaded.

A maritime intelligence source said the ship may have made the journey around Africa to avoid the Suez Canal, where such a large super-tanker would have had to unload its cargo and refill after passing through, exposing it to potential seizure.