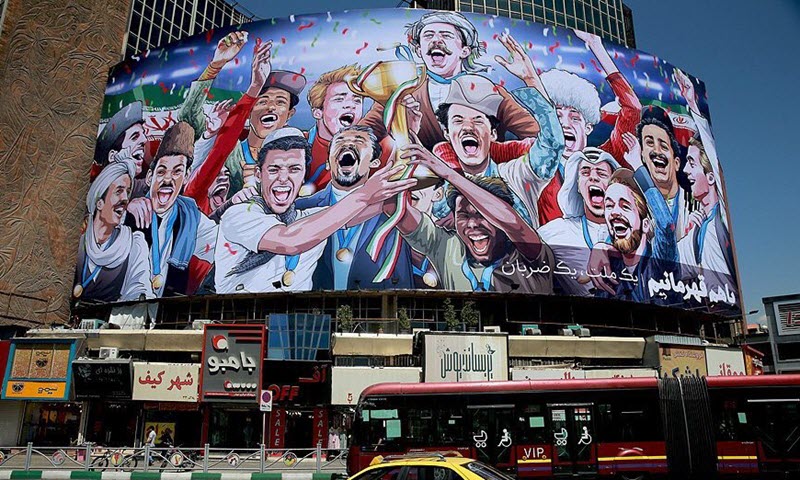 June 14th marks the start of the 2018 World Cup in Russia. As football is the most popular sport in Iran, Iranian media has been discussing the impact that the US withdrawal from the nuclear deal has had on football.

Two weeks ago, the American company, Nike, refused to provide shoes for Iran’s national football team because of US sanctions, despite their previous agreement to do so. As well, many international companies are wary of sponsoring Iran’s national team.

Iranian women are banned from entering stadiums to watch the games, as this is regarded as being against Islam. Gender-based discrimination is against FIFA’s rules, and is one of the reasons Iran may not host international football tournaments. When Iranian teams host foreign football teams as part of Asian qualification games, the Islamic Republic attempts to meet the criteria by allowing a small group of foreign female football fans to watch the game — seating them in a separate part of the stadium.

In August 2018, the Ministry of Sports and Youth announced that two Iranian footballers would not be invited to play for Iran’s national team, because they had crossed the Islamic Republic’s “red lines” when they played against an Israeli club. This nearly led to suspension. The two players, Masoud Shojaei and Ehsan Hajsafi, played as part of the Greek club Panionios in a Europa League qualifier against Maccabi Tel Aviv. After the announcement, FIFA demanded explanation from Iran over this decision. Media outlets broadcast news that Iran would be suspended over the matter, but Iran’s football federation, concerned over being penalized on the eve of the 2018 World Cup, allowed the two players to play for Iran’s national team.

FIFA had previously suspended the Iranian federation in November of 2006, after Iran’s Physical Education Organization interfered during the 2006 World Cup. The ban was lifted in December 2006, when the Iranian government declared its commitment to not interfere in football affairs.

The directors of at least 10 Iranian football clubs are current or former commanders of the military forces – the Islamic Revolution Guards Corps (IRGC). Their positions derive from the IRCG’s financial and lobbying powers. Iran’s military institutions indirectly impact football. A group of the IRGC’s paramilitary Basij members attacked Saudi Arabia’s embassy in Tehran, breaking up diplomatic relations between the two countries. Saudi officials decided to stop sending their football teams to Tehran, saying that the security of its footballers would be at risk in Iran. Their decision was backed by the Asian Football Confederation. Iranian teams have been deprived of encounters with Saudi teams in Tehran since January 2016. The two teams must play in third-party countries.

Previous articleIran: Freedom Curbed in All Areas of Life
Next articleIranian Regime’s Fear of PMOI/MEK Revealed in Remarks on Iranians’ Grand Gathering in Paris