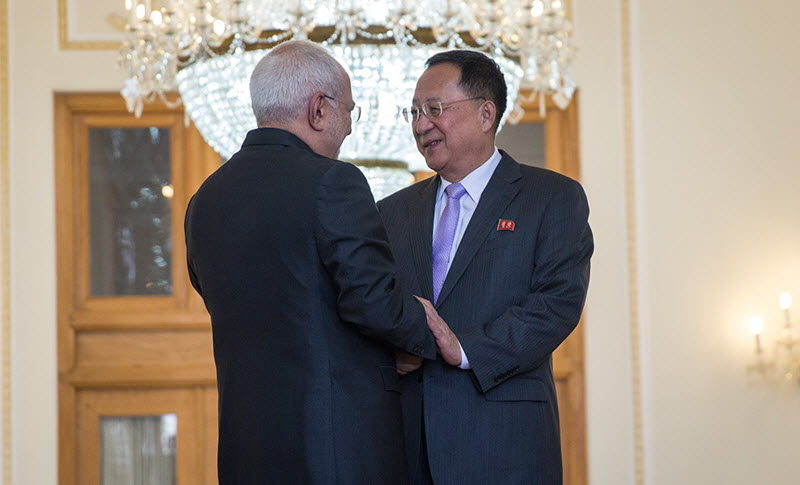 He didn’t provide any extra details, but the timing of the announcement was strategic, given the recent US decision to end sanctions waivers for Iranian oil, which has long been a lifeline for the Regime.

North Korea, which is seeking to circumvent its own sanctions, has a cap on how much oil it can import from other countries and the Iranian regime is now looking to boost its oil exports by selling to countries with “extremely limited exposure to US sanctions enforcement,” according to Elizabeth Rosenberg, ex-senior advisor to the US Department of the Treasury.

She wrote, in an op-ed for Foreign Policy Magazine: “Regulators in countries angered by the US policy may look the other way as barter and smuggling activity occurs. As some Iranian oil continues to make its way to market, observers may conclude that US sanctions are not so tough after all, which could supercharge the incentive to push the envelope or breach them.”

Basically, as Donald Trump’s “maximum pressure” policy has failed to unify the international community on North Korea and Iran, the two rogue states could well work together to thwart the US.

Of course, North Korean-Iranian regime relations have always been formed out of necessity.

In the 1980s, just after the Iranian Regime was founded, North Korea and Iran started to work with each other, which led to North Korea selling Iran weapons during the eight-year-long Iran-Iraq War.

These relations only expanded during the 1990s, when North Korea needed a vast supply of subsidized gas, following the collapse of the Soviet Union, and turned to Iran regime, which was one of the few oil-rich countries it maintained diplomatic relations with, to meet its energy needs.

The waivers, issued to Iran’s eight biggest oil buyers last November, were only meant to last for six months, so the US is merely allowing them to expire. This means that China, Japan, South Korea, Turkey, Taiwan, India, Greece, and Italy are now no longer allowed to buy Iranian oil without US penalties.

All signs point to no. While it is obviously a threat to global security to have these two nations so close, it’s important to remember that North Korea doesn’t have the money to purchase huge amounts of Iranian oil. This means that Iran will not gain large amounts of money with which to commit terrorist acts.