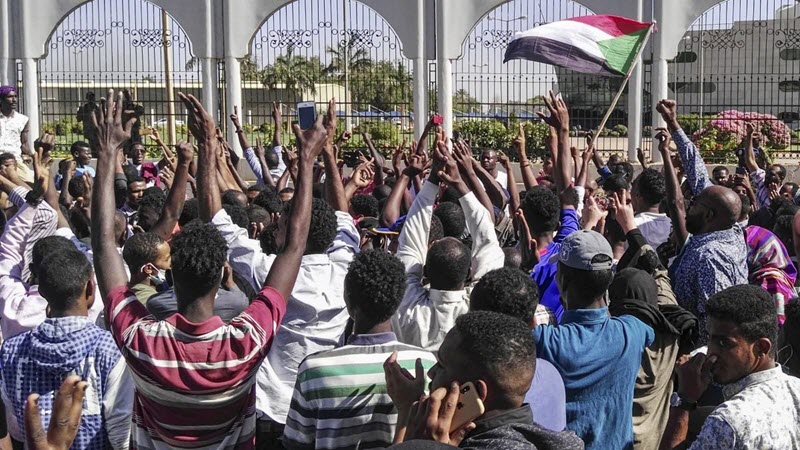 Iran Regime lost one of its closest allies on Thursday, April 11, as Sudan’s army seized power in the country following months of protest demonstrations and arrested Omar al-Bashir.

Sudan’s Defense Minister Awad Ibn Ouf announced that the army would hold power for two years, closed the Sudanese airspace and borders, and called for an end to the protests. While security officials said that all political prisoners have been freed.

While Iran regime’s officials have kept silent on Bashir’s arrest and the protests, for now, many in Iran’s state-run press are describing this as a “coup”. Activists, on the other hand, are looking forward to the day when this happens in Iran.

An Iranian activist tweeted that hopefully a similar news story would soon be published about Iran, while an unnamed Twitter user pointed out that regime’s Leader Ali Khamenei is now one of the longest-ruling tyrants.

Bashir, who has been convicted of crimes against humanity at international tribunals, was a staunch ally of the Iranian regime and Khamenei, as they were of him. This was shown in the Regime’s treatment of Bashir on the several occasions that he visited Iran, but also in the reaction to his conviction in 2008.

In the 1990s, Sudan and Iran were reported to be collaborating militarily because the Iranian regime had financed weapons for Sudan and sent in their Revolutionary Guards (IRGC) to support the Sudanese military. In return, Sudan offered naval facilities to the Iranian regime.

However, following the war with South Sudan, which ended in 2011 with its independence, Sudan was left significantly poorer, having lost its oil wealth as the wells are in South Sudan.

The Iranian regime, financially strapped because of sanctions and the war in Syria where they were supporting the Assad dictatorship, could not help. Thus, Bashir turned to Iran’s biggest regional enemy Saudi Arabia in 2015, expelled all Iran regime’s entities from his country, and joined the Saudi campaign in Yemen against Iran-backed Houthi rebels. (Reportedly, he also believed that this would get the International Criminal Court to drop the genocide charges against him.)

One journalist wrote about this that Bashir’s “hopes of receiving petrodollars” were now dashed, while another claimed that Iran had ditched Bashir, rather than the other way around.

This is one example of how Iran regime’s foreign policy is destabilizing and belligerent because they befriend dictators, as they did in Syria, Venezuela, Sudan, and Muammar Qaddafi’s Libya, which bring the Regime into conflict with the West.

Of course, Iran regime’s foreign policy is also a problem because they are trying to export the malign revolution across the Middle East and they seek to develop nuclear weapons.

Previous article
What Does the US’s IRGC Designation Mean?
Next article
Iran news in brief, April 11, 2019