Khamenei’s Representative: Cost of Compromise With U.S. Is Greater Than Cost of Confrontation 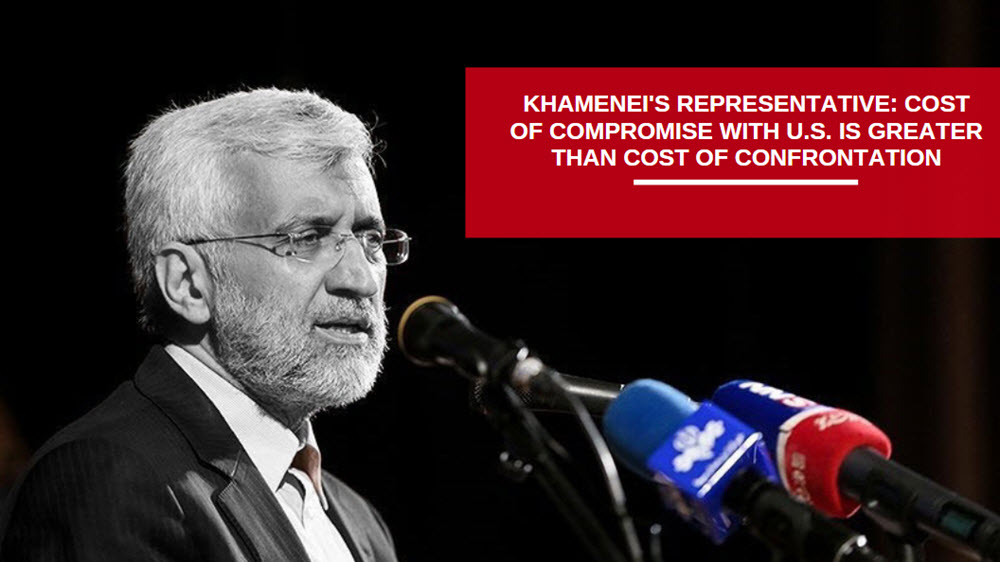 A top representative of the Iranian regime’s Supreme Leader has told Iranian state television that reaching a deal with the United States is costlier for the regime than continuing with confrontation.

Speaking on Iran’s Channel 2 on Tuesday, June 18, Saeed Jalili, the representative of the Supreme Leader Ali Khamenei at the Supreme National Security Council, said that “the cost of compromise is greater than the cost of resistance,” the state-run Mehr News Agency reported.

“We can resist America’s economic pressure with the same determination we displayed during the Sacred Defence,” he said, referring to the Iran-Iraq war.

Jalili claimed that the US has resorted to economic pressure against Iran’s regime because “it knows the military option does not have any advantages for it.”

“They apply pressure [on us] and at the same time they say they are not looking for a war. This is because they know that they cannot impose a war on the people of Iran and they are well aware of the costs of a war,” he added.

Separately. the commander of the Iranian regime’s Islamic Revolutionary Guards Corps (IRGC) said on Tuesday that Tehran’s ballistic missiles were capable of hitting “carriers in the sea” with great precision.

“These missiles can hit with great precision carriers in the sea … These missiles are domestically produced and are difficult to intercept and hit with other missiles,” Brigadier General Hossein Salami said in a televised speech.

He said the regime’s ballistic missile technology had changed the balance of power in the Middle East. His comments followed attacks on two oil tankers in the Gulf of Oman last week that added to already rising tensions between Tehran and Washington.

The U.S. State Department added the IRGC to its list of Foreign Terrorist Organizations in April 2019.

The U.S. will maintain its pressure campaign on Iran’s regime and continue to deter aggression in the region, but does not want the conflict with Tehran to escalate, Secretary of State Mike Pompeo said on Tuesday.

“We have been engaged in many messages, even this moment right here, communicating to Iran that we are there to deter aggression,” Pompeo told reporters at MacDill Air Force Base in Florida. “President Trump does not want war and we will continue to communicate that message while doing the things that are necessary to protect American interests in the region.”

Separately, U.S. President Donald Trump said on Tuesday Washington was very prepared with regard to the Iranian regime.

On Monday, the U.S. announced it would deploy about 1,000 more troops to the Middle East, citing concerns about a threat from Iran’s regime.

U.S. officials have blamed the Iranian regime for attacks last week on the two oil tankers in the Gulf of Oman and attacks on four tankers in May off the coast of the United Arab Emirates.

The Iranian regime announced on Monday it would soon breach limits on how much enriched uranium it can stockpile under a 2015 nuclear agreement.