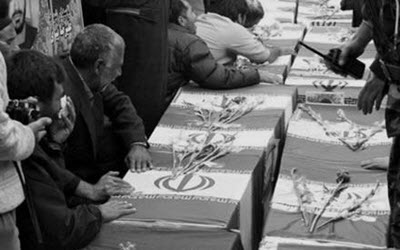 NCRI – Orient, the Syrian opposition news TV, quoting media sources reported on Saturday October 29 that Brigadier General Mohammad Hossein Rafieii, one of the highest ranking commanders of the Iranian regime’s Revolutionary Guards (IRGC) was killed today during clashes with opposition combatants in Aleppo. He was one of the most senior commanders of the IRGC dispatched to Syria by Iranian regime to participate in killing and massacre of Syrian people.

According to Orient, he was in charge of the IRGC’s Special Forces Commandos. This IRGC commander had been sent to Syria after the Iranian regime failed to gain control of Aleppo. The announcement came simultaneous with the start of the operation to break the siege of Aleppo and it is possible that he was killed in clashes in the city by the Syrian opposition combatants who were able to seize strategic positions of the city.

Orient also reported that another Pasdar (Revolutionary Guard) was killed in Syria and said: “Gholamreza Samaei, one on the most senior commanders of IRGC and a close individual to Qassem Soleimani, commander of [terrorist] Quds Force, was also killed in Syria. He was also one of the first people in the Iranian regime’s armed forces who served the IRGC for thirty years during which he held important military and intelligence positions.”

Iranian regime’s state-run media acknowledged that 9 IRGC officers were killed [in Syria] in the past month, including Brigadier General Ahmad Gholami, Hossein Alikhani, and Adel Sa’ed (member of Basij force).
It should be noted that the Iranian regime has suffered the highest number casualties in May since its military intervention in Syria. Orient added: “The Iranian regime suffered an unprecedented human casualties after 30 of its troops, 60 Afghan and 12 Iraqi militias dispatched by the regime to Syria and 8 elements of Lebanese Hezbollah as well as 20 troops of Assad regime were killed and dozens of others wounded and captured during clashes with Fath Army in the battles in Khan Khatoum and surrounding areas.”