Saudi Arabia: We Will Not Tolerate Iran Regime Interference in Syria and Yemen 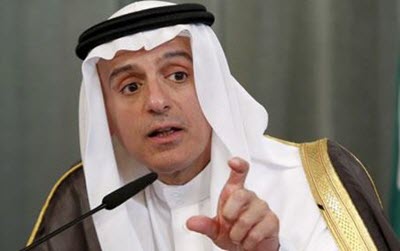 NCRI – The Saudi Foreign Minister, Adel al-Jubeir, has said his country “we will not tolerate the interference of the Iranian regime in Syria and Yemen.”

“The Iranian regime deploys IRGC forces and Hezbollah to Syria in order to support the Assad regime. Additionally, the sectarian militias affiliated with the Iranian regime are present in Iraq, Afghanistan, and Pakistan. Why does the Iranian regime take such measures?”, Saudi Foreign Minister said in an interview with Sky News.

“The Iranian regime must understand the fact that the measures implemented by them for the past 35 years are not acceptable and the world will not let them continue these practices,” he added.

According to al-Jazeera News, he intended to visit Iraqi officials in order to discuss issues concerning the security in the region, terrorism as well as the situation in Syria and Yemen; inquiring about Iraq’s stance towards these issues and its relations with the Iranian regime.