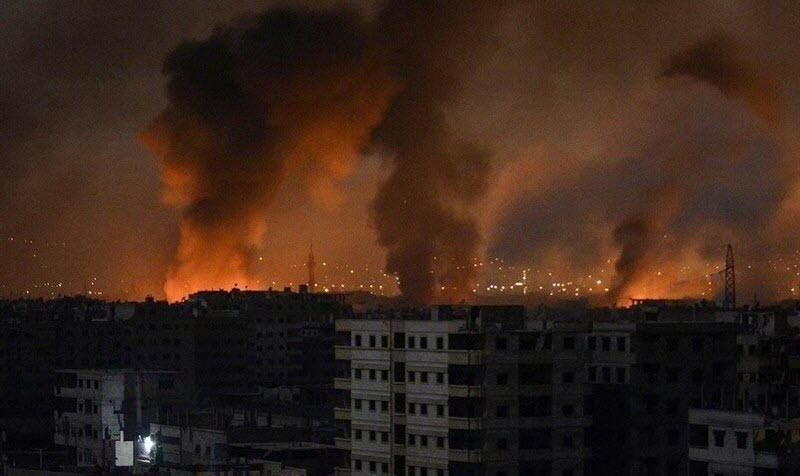 On Sunday, the Los Angeles Times reported upon Mike Pompeo’s first foreign tour as Secretary of State, which the paper characterized as an effort to encourage American allies in the region and around the world to support a “robust response” to Iran-linked security threats that are seen as escalating. Pompeo visited both Saudi Arabia and Israel, each of which has been steadily undertaking its own efforts to confront Iran by way of public statements, diplomatic pressures, and proxy wars.

The Saudis have been leading a bombing campaign in Yemen against Iran-backed Shiite rebels known as the Houthi, and Israel has recently inched closer to direct conflict with the Iranian regime, following reported Israeli attacks on Iranian regime’s bases in Syria. The latest such attack, on Sunday, was met with denials from semi-official Iranian regime’s media, as reported by Reuters. Tasnim News Agency denied reports that Iranian regime’s personnel had been killed and that an Iranian regime’s base had been destroyed. This contrasts somewhat with Iranian media’s response to an apparent strike earlier in April. In that case, Tehran confirmed the deaths of seven Iranian nationals but contradicted initial reports that they were members of the Iranian Revolutionary Guard Corps (IRGC), instead insisting that they were military advisors from Iran’s regular armed forces.

Critics of the Islamic Republic insist that Iranian influence over the Syria Civil War goes well beyond advisory activities and involves both direct participation of the IRGC and the ongoing recruitment and training of local and regional Shiite paramilitaries that are increasingly integrated into what’s left of the Syrian army. Last week, the Israeli ambassador to the United Nations, Danny Danon, highlighted the location of an Iranian base very near to Damascus and declared that the IRGC was systematically training some 80,000 fighters at that location.

Iran regime’s partial denial of casualty reports from the Israeli strike earlier in April appears to serve a different purpose than its more full-throated denial of the recent strike. In the first place, the Islamic Republic seemed to be casting doubt upon the extent of its entrenchment in Syria, but in the latter case it seemed to be making the point that its current entrenchment cannot be easily dislodged. This may be important as the Iranian leadership tries to push back against increasing global pressures while encouraging high morale among its Shiite proxies and other allies throughout the region.

These trends were on prominent display in the immediate aftermath of Pompeo’s Middle East tour. The newly appointed Secretary of State to criticize Iran for its “destabilizing and malign activity” and for its status as the “greatest sponsor of terror” in the world. But Iran regime’s Supreme Leader Ali Khamenei fired back by saying via Twitter, “Wherever US entered, it created instability, brought misery to people; that’s why US’s feet must be cut off from West Asia; US must exit this region.”

Additionally, as an example of comments that may be relevant to the Iranian regime’s denial of recent losses in Syria, CNN quoted Khamenei as warning regional adversaries against being emboldened to act against the Iranian regime in the wake of Pompeo’s visit. “If they stand against Iran,” he declared, “they will certainly suffer from defeat.”

But such boasts leave open the question of what constitutes “standing against Iranian regime.” Apart from Saudi attacks on Iranian proxies in Yemen and Israeli attacks on Iranian proxies in Syria, both countries have been vigorously supporting the Trump administration’s efforts to strengthen or else eliminate the 2015 Iran nuclear agreement, formally known as the Joint Comprehensive Plan of Action. And it was in the context of that mission that Pompeo made reference to Iranian regime’s “destabilizing and malign” activities, which he said were insufficiently addressed by the existing agreement.

On May 12, President Donald Trump will be required to make a decision as to whether sanctions waivers put into place by the JCPOA will be extended. In January, he said that this would only take place if the US Congress and the European signatories to the deal agreed upon a plan for fixing what he described as “terrible flaws” in the JCPOA. These would-be fixes fall into four main categories: expanding the monitoring of Iranian nuclear activities, eliminating sunset provisions that allow restrictions on those activities to expire, imposing new restrictions on the Iranian ballistic missile program, and addressing Iran’s overall regional role.

The case for expanded monitoring and permanent restrictions was arguably bolstered on Monday when Israeli Prime Minister Benjamin Netanyahu announced the release of new information regarding the past nuclear dimensions of Iran’s nuclear program. Citing 55,000 pages of documents smuggled out of a Tehran storage facility, Netanyahu called attention to a program called Project Amad that reportedly sought to develop and test nuclear weapons, despite Iranian officials denying that such a program had ever existed.

According to NBC News, Netanyahu acknowledged that the project had been shelved in 2003, but insisted that the regime continues aspiring to be a nuclear-armed state and has preserved and expanded its nuclear activities with that goal in mind. This latter claim has seemingly been confirmed by Iranian officials themselves, such as the head of the Atomic Energy Organization of Iran. In recent weeks, Ali Akbar Salehi has repeatedly stated that Iran is capable of resuming full-scale nuclear activities in the event of the JCPOA’s dissolution, and could dramatically expand it enrichment beyond 2015 levels, in as little as two days.

These and other indicators will no doubt bolster opposition to the current form of the JCPOA among the Trump administration, the Israelis, the Saudis, and other opponents of Iran’s clerical regime. In a larger sense, it may also bolster the trend of expansion in ties among those parties, which the LA Times described as a driving force behind Pompeo’s Mideast tour.

However, the exact makeup of this US-led anti-Iran alliance may have not yet been determined. While concerns over the JCPOA have long contributed to cooperation among Iran’s staunchest adversaries, including former enemies Israel and Saudi Arabia, those concerns have also strained relations between the US and longstanding European allies, who overwhelmingly remain committed to the agreement.

Last week, French President Emmanuel Macron and German Chancellor Angela Merkel each visited Washington to make a late-stage appeal for Trump to keep the US in the JCPOA. Macron took the opportunity to further underscore his agreement with the White House about the need for confronting Iran’s ballistic missile activities and regional interference, but he did not step back from his disagreement with Trump over the future of the nuclear deal.

Then, on Monday, The Hill reported that Macron and Iranian President Hassan Rouhani had spoken by phone and agreed to work together on a plan for preserving the JCPOA. Rouhani reportedly sought to grow the wedge between the US and Europe by accusing the US of breaching the agreement and undermining the chances of business deals between Iran and the Europeans before Trump’s decision on sanctions waivers had even been made.

It is, of course, difficult to envision the Europeans explicitly siding with Iran against the US and its Middle Eastern allies, but it is much easier to imagine the Europeans withholding support for a “robust response” to Iranian security threats if the US is seen as the aggressor in any future confrontation. On the other hand, the Iranian regime’s broader rhetorical attacks on its regional and global adversaries may serve to limit the chances of such an outcome, especially insofar as the rhetoric is often backed up by measures that endanger Western security or the lives of individual Western nationals.

Case in point, the Iranian judiciary acknowledged on Monday that it had filed national security charges against Abbas Edalat, an Iranian-British university professor and the latest dual national to be accused of espionage in absence of any meaningful evidence. Upwards of 30 such individuals have been targeted by the judiciary since the conclusion of nuclear negotiations, and the Associated Press reports that state-affiliated Iranian media had described Edalat as one of several people recently arrested by the IRGC for membership in a “network affiliated with Britain.”

Previous articleLast Year, More Than 70,000 Cyberspace Users Were Arrested (192 per Day) in Iran
Next articleIran, Labour Day Protests, Developing Report on May. 01, 2018