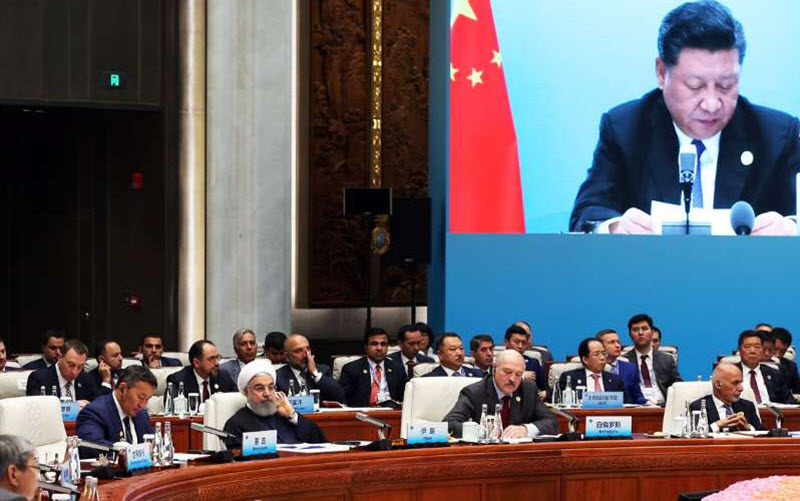 Pointing to Rouhani’s meeting with leaders of SCO member states, Rouhani-linked Shargh newspaper on June 10, 2018, considers this as part of a ‘look east policy’, adopted by Rouhani and the regime to deal with the West’s pressures.

With the Shanghai Cooperation Organization held in the Chinese city of Qingdao officially over, it became clear that state media’s earlier claims saying that the Iranian regime’s SCO membership application will definitely be approved this year had been nothing but wishful thinking.

Besides, it also indicates that regime’s so-called ‘look east policy’ is only a mirage, as the SCO member states rejected regime’s membership request for the 13th year in a row.

“First of all, it should be pointed out that Putin’s remarks on supporting Iran’s SCO membership request are by no means credible as Putin has always been a liar of a diplomat,” writes state-run Jahan-e-Sanat newspaper on June 11, 2018.
“Besides, the speculations over Iran’s permanent membership in the organization are quite unlikely and too far-fetched, as there’s no bright prospect for Iran with regard to the SCO.”

Also in this regard, state-run “Iranian Diplomacy” website on June 11, 2018, questions regime’s ‘look east policy’ and its relying on Russia, emphasizing that “regardless of whether it’s been before or after the revolution, it’s a proven fact that Iran has had a more straightforward relationship with the West, compared to its relations with the East. Iran won’t be able to offset future sanctions or reduce their impacts by joining the SCO.”

Regime’s former ambassador ‘Afshar Soleimani’ meanwhile believes that it would be impossible for Iran to join the SCO, since “China and Russia’s relationships with the United States prevents Iran’s permanent membership in the organization. So, the speculations over Iran’s permanent membership in the organization should be ruled out as quite unlikely and too far-fetched.” (State-run Iran newspaper, June 11, 2018)

Also state-run Jahan-e-Sanat newspaper has pointed to the issue on June 11, writing “despite favorable conditions for Iran’s joining the SCO, it looks like the SCO doors will remain closed to Iran.”

State media’s distrust of Russia and the failure of regime’s look east illusion of a policy are all based on the fact that Russia has always adjusted its policies and its relations with other world powers with regard to its national interests. That describes why Russia is not only unwilling to upgrade its relations with the Iranian regime, but it has always left it in the lurch in the nick of time, despite huge concessions the country has already received from the regime.

An instance in this regard could be Russia’s voting in favor of Security Council resolutions against regime’s nuclear program, and also more recent one is Russian President Putin and Foreign Minister Lavrov’s recent remarks, asserting that all foreign troops, including the ones belonging to the Iranian regime and its puppet Lebanese Hezbollah, have to leave Syria.

When Russia with such a power and influence is unwilling to upgrade its relations with the Iranian regime for fear of endangering its ties with the West, then it’s quite natural that other SCO member states are all the more unwilling to do so. Moreover, it’s a reality that Russia can’t take the West’s place, neither economically, nor politically.

State media’s stances on Russia’s policies and its abandoning the regime in crucial moments points to the fact that regime’s so-called ‘look east’ policy is not going to bear any fruits.