Syria ‘on brink of economic collapse’ 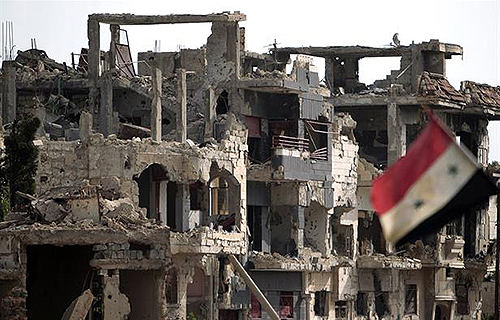 The Syrian pound has lost 80 per cent of its value and inflation has averaged 51 per cent, the group said on Tuesday in a report entitled “Syria’s Economy: Picking up the Pieces.”

The think-tank said Syria’s economy has contracted by more than 50 per cent in real terms since 2011, with the biggest losses in output coming in the energy and manufacturing sectors.

“The population has shrunk from 21 million to about 17.5 million as a result of outward migration (mainly as refugee flows) and more than a quarter of a million deaths. At least a third of the remaining population is internally displaced,” the report says.

“Inflation has averaged 51 per cent between January 2012 and March 2015, according to the monthly data issued by the government, and the Syrian pound has depreciated by about 80 per cent since the start of the conflict.”

The report added that the Assad regime is receiving economic support from the Iranian regime in the form of oil supplies and credit; however, “Iran is setting political and economic conditions for continuing to provide such aid.”