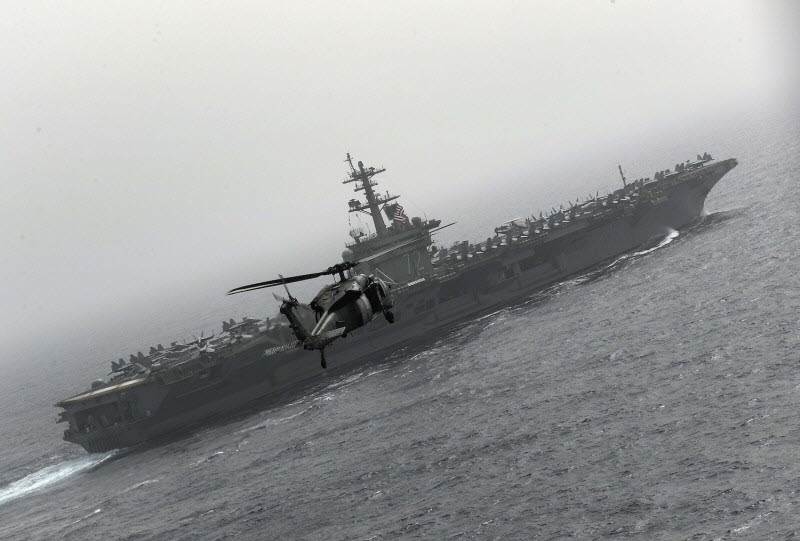 The US carrier strike group, including the USS Abraham Lincoln aircraft carrier and four B-52 bombers, have now arrived in the Middle East in response to concerns that the Iranian regime may be planning to attack American troops or interests.

US Central Command spokesman Navy Capt. William Urban announced Thursday that the strike group has arrived in the region, via the Suez Canal. While an anonymous defence official confirmed that the B-52 bombers are stationed at Al Udeid Air Base in Qatar.

CENTCOM commander Marine Gen. Kenneth “Frank” McKenzie Jr. said Wednesday the request for more military assets in the region was in direct response to “a number of troubling and escalatory indicators and warnings” from Iran, while Air Force Chief of Staff Gen. David Goldfein said this “sends a message that we can face any threat at a time and place of our choosing”.

The American forces arrived in the Middle East at the same time as European leaders denounced Iran regime’s threats about breaching the 2015 nuclear deal by restarting sections of its nuclear program.

Iran regime’s President Hassan Rouhani said Wednesday, hours before new sanctions were imposed by the US, that Iran regime would begin enriching uranium beyond allowable limits in 60 days if world powers failed to protect the Gulf country from US sanctions. The Iranian regime also threatened to leave the nuclear deal altogether unless they got economic support.

The foreign ministries of the European Union, Britain, France, and Germany said Thursday in a joint statement: “We reject any ultimatums and we will assess Iran’s compliance on the basis of Iran’s performance regarding its nuclear-related commitments.”

They made clear that they wanted to preserve the agreement, which lifted international sanctions on the Iranian regime in exchange for a curbing of its nuclear program, even though the US pulled out last May.

Iran regime’s Foreign Minister Mohammad Javad Zarif responded to the European leaders in a tweet, which read: “EU statement today is why [nuclear deal] is where it is: the US has bullied Europe—and rest of world—for a year and EU can only express “regret”. Instead of demanding that Iran unilaterally abide by a multilateral accord, the EU should uphold obligations – including normalization of economic ties.”

The sanctions Donald Trump imposed on Wednesday targeted Iran regime’s metal exports, which were major sources of revenue for the country. The US has previously sanctioned Iran’s auto industry, use of the US dollar, and oil exports, which have rocked the Iranian economy.