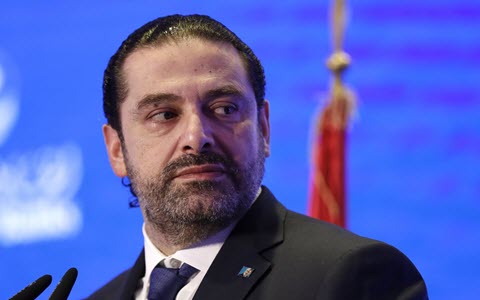 NCRI – World powers are trying to stabilise Lebanon, on Friday, December 8, by pushing the Iranian Regime to stop interfering in the country’s political system, and urging the Iran-backed Hezbollah terrorist group, which holds a vast amount of political power in Lebanon, to reign in its activities elsewhere in the Middle East.

Chaos erupted in Lebanon when Saad al-Hariri resigned as prime minister on November 4, claiming that Hezbollah and the Iranian Regime were plotting to assassinate him- as they did his father in 2005- and assessing that it was impossible to get any substantive work done with Hezbollah blocking his every move.

Hariri resigned from Saudi Arabia, which caused many Hezbollah/Iranian Regime supporters to claims that he was being held hostage by the Saudis. This was rejected by the Saudis, Hariri, Hariri’s government ministers, and the fact that Hariri left Saudi Arabia for the UAE and France before returning to Lebanon this week.

Hariri withdrew his resignation on Tuesday, December 5, in order to hold negotiations with the other political factions, including Hezbollah, and the talks ended with a reaffirmation of state policy to stay out of regional conflicts.

This policy was first announced in 2012, in order to keep Lebanon out of the Syrian civil war but Hezbollah fighters- instructed by Iran- went in on behalf of the Bashar Assad dictatorship.
It has also been undermined by Iran-backed Hezbollah’s comments against Donald Trump’s decision to recognise Jerusalem as Israel’s capital.

At Friday’s meeting with world powers, Hariri said: “The disassociation policy is driven by my government and adopted by all its political components and will allow us to maintain our national unity. The stability of Lebanon may seem like a small miracle given the many conflicts that destabilize the region, but it is maintained at the cost of sacrifice, dialogue and compromise.”

The International Lebanon Support Group (GIS), which is made up of the five permanent members of the UN Security Council (the UK China, France, Russia and the US), met in Paris to strengthen Hariri’s hand and prevent a new escalation of tensions.

French President Emmanuel Macron, who arranged Hariri’s safe passage to Paris last month, in order to start resolving the crisis, said: “For Lebanon to be protected from regional crises it’s essential that all Lebanese parties and regional actors respect the principle of non-interference. The meeting today must show the will of [the] international community to see the policy of regional disassociation put into place effectively by all in the country.”

Saudi Arabia is concerned that Iran’s malign influence across the Middle East- in the form of proxy groups- is the root cause of not just Lebanon’s crisis but the Middle East crisis as a whole.

A senior French diplomat noted that this conference would support Lebanon staying out of other Middle Eastern conflicts and that it was important for other countries to step away from Lebanon.

Those attending Friday’s meeting, including US Secretary of State Rex Tillerson, are poised to back measures to strengthen the Lebanese army, set up an investment conference for Lebanon once legislative elections take place, support economic reforms and the country’s handling of millions of Syrian refugees.

Previous article
Iran Regime’s Use of Militias and Proxies Is Growing out of Control
Next article
New U.S. Plan to Curb Iran Regime’s Expansionism