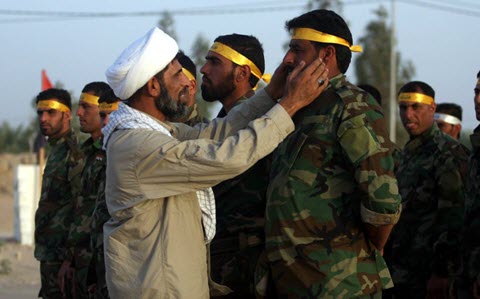 NCRI – US Congress has submitted a bill to designate the al-Nujaba movement in Iraq as a terrorist organisation. The bill gives information about the role of this dangerous group and gives an insight into the consequences of the existence of so many sectarian militias across the whole of the Middle East, in particular in Iraq and Syria.

Iran has numerous militias and proxy groups spreading its ideology to other nations, so much so that you could say that they are critical elements of its foreign policy.

Al-Nujaba was formed by Akram al-Kaabi, a Shiite cleric, and it is a sectarian militia that is under the orders of Iran. Just like the Lebanese Hezbollah and many other groups. The leaders of Hezbollah and al-Nujaba have met and the two groups enjoy good relations.

With regards to its links to the Quds force, a sub-division of the notorious Islamic Revolutionary Guard Corps (IRGC), Kaabi said that the group is honoured to be “part of the same military-ideological school” as its commander Qassem Soleimani.

It must be clarified that al-Nujaba is not part of Iraq’s Popular Mobilization Force, or PMF, but it does control two of its brigades. Al-Nujaba is bigger than the PMF and is not linked to the government of the country. It is under the command of the Iranian regime and is IRGC. All equipment, funding and training is provided by Iran.

Kaabi was born in the seventies and has worked with Shiite cleric Mohammed Sadeq Sadr. He led the Mehdi army in the second al-Najaf battle was sent to Iran for military training. He then founded Asaib Ahl al-Haq, but later abandoned his military career to pursue religious studies in Iran. However, he returned to it when the Syrian conflict started.
Political changes in Iraq led to military clashes and a new sectarian militia was formed – Asaib Ahl al-Haq – in which Kaabi became the deputy secretary general.

He has always been supported by Iran and was designated by the United States as a figure that is destabilising peace in Iraq. Kaabi has always incorporated his religious image into his military one and he followed Iran’s Wilayet al-Faqih. This is how al-Nujaba came about.

It has been rumoured that the al-Nujaba militia’s main role is to assist Iran with its goal of achieving a land route that goes through Iraq to Syria.

There are doubts about how the group has managed to become so powerful in such a short amount of time. Experts believe that the group may include members of Iran’s Basij force or Hezbollah members.

The group has never hidden its links with Iran and it has thanked Iran for its technical, logistical and provisioning support.

Iran’s use of sectarian militias and proxy groups across the Middle East is a major concern for leaders in the region, and further afield. They are helping Iran achieve its goals of regional hegemony and they are ensuring that wars and conflicts are prolonged.

If Iran is to be stopped in its tracks, it is imperative that its militias and proxy groups are cut off too.