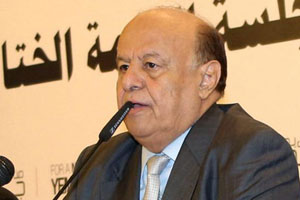 In a televised speech on Saturday, Yemen’s President Raboo Mansour Hadi pledged to fight ‘Iran’s influence’ on his country.

Hadi, who was under rebel imposed house arrest until last month when he fled to Aden in the south of the country, accused Shiite Huthi militia of importing the Tehran’s ideology into Yemen.

In the broadcast, Hadi said he would “ensure the Yemeni republic flag will fly on the Marran Mountain instead of the Iranian flag.”

A day after Hadi called on the UN Security Council, “to rise up to its responsibilities” to protect Yemen, the body will meet on Sunday to discuss the deadly turmoil in that country.

The Council is negotiating a statement on Yemen that could be adopted during Sunday’s meeting, according to diplomats.