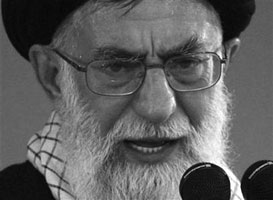 Ali Khamenei, the Supreme leader of the clerical regime in Iran, called for “Death to America” on Saturday, a day after President Barack Obama appealed to that regime to seize a “historic opportunity” for a nuclear deal.

Khamenei told a crowd in the city of Mashhad that his regime would not capitulate to Western demands. When the crowd started shouting, “Death to America,” the ayatollah responded: “Of course yes, death to America, because America is the original source of this pressure.

Obama, in a message to Iranians celebrating the Persian new year this week, suggested that success at the talks could build on trust, proclaiming it was up to Iran “to seize this moment and the possibilities that can bloom.”

But Ali Khamenei told the crowd: “Negotiations with America are solely on the nuclear issue and nothing else,”

Khamenei also demanded that a nuclear deal end economic sanctions on his regime at its outset, rather than gradually, as the United States and five other world powers have said during negotiations.
“Sanctions must be lifted immediately,” Khamenei said.