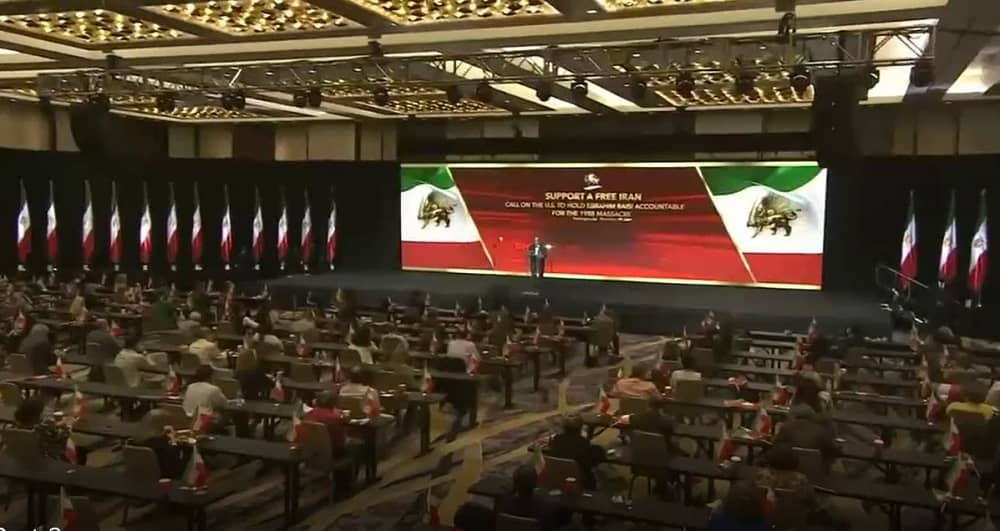 On Tuesday, the Iranian regime’s President Ebrahim Raisi address the annual gathering of the United Nations General Assembly with a pre-recorded speech in which he overlooked the issue of nuclear proliferation and blamed the United States for Iran’s immediate problems. Referring to economic sanctions as a new means of warfare, Raisi accused the US Treasury Department of preventing the import of medicines during the coronavirus pandemic, then cited recent developments like the fraught withdrawal from Afghanistan as signs of American decline and failure.
These talking points were rejected on the day of the speech not just by US officials but also by Iranian expatriates and ethnic Iranians throughout the world. The evening before Raisi’s speech, the Organization of Iranian-American Communities held a conference in Washington, D.C. which condemned the Iranian president’s participation in the General Assembly and highlighted his past involvement in human rights abuses and crimes against humanity. A similar event was held in Stockholm, Sweden on Tuesday to underscore the organizers’ appeals for Raisi to face accountability for his key role in the massacre of over 30,000 political prisoners in 1988.
Tehran’s conscious disregard of the 1988 massacre has been reaffirmed on many occasions over the past 33 years, with Raisi’s appointment to the presidency being among the clearest examples. In the run-up to his June 2021 “election,” Raisi was widely condemned by Iranian activists as the “henchman of 1988” – a label that was repeated by former Iranian political prisoners in this week’s conferences. At the time of the massacre, Raisi was one of four officials to serve on the Tehran “death commission,” a body that interrogated prisoners and ordered executions in Evin and Gohardasht Prisons and thus set the stage for similar proceedings in detention facilities throughout the country.

Nasrollah Marandi, speaking on behalf of an entire delegation of former political prisoners at the Stockholm conference, reported that they had witnessed the execution of thousands of their friends and colleagues in the two facilities where Raisi had his initial jurisdiction. “Many of our friends witnessed the execution of many MKE members by Raisi in Hamedan and Karaj,” he added, referring to the Mojahedin-e Khalq, or People’s Mojahedin Organization of Iran (PMOI/MEK), which was the leading voice of opposition to the theocratic regime and thus became the main focus of the 1988 massacre.

The massacre reportedly claimed about 30,000 victims over the course of three months, with 90 percent of them being affiliated with the MEK. Ebrahim Raisi is considered uniquely responsible for this pace of executions, and his presence in Hamedan and Karaj, as well as in Tehran, is evidence of this. Once the systematic executions were well underway in Evin Prison, Khomeini personally expanded Raisi’s jurisdiction as a reward for the initial enthusiasm he had demonstrated in implementing Khomeini’s fatwa ordering the mass execution of the MEK’s members and defenders. In a letter, the regime’s founder and first supreme leader empowered Raisi to correct for the “weakness of the judiciary” by facilitating “God’s command” in several cities where the MEK was believed to be highly active.

“Khomeini sought to eradicate the [MEK] quickly,” said Mrs. Maryam Rajavi, the President-elect of the National Council of Resistance of Iran, in a speech delivered remotely to the Stockholm gathering. “He wanted to carry out the horrendous massacre in total silence. The plan for the killings in Tehran and dozens of other cities was designed such that no one would know about it.” But Mrs. Rajavi went on to credit MEK-affiliated activists with continuing to collect evidence of the massacre, for the sake of raising its international profile and helping to set the stage for international prosecution of leading perpetrators, including Raisi.

The event in Washington was effectively headlined by Mike Pompeo, who served as Secretary of State in the Trump administration. 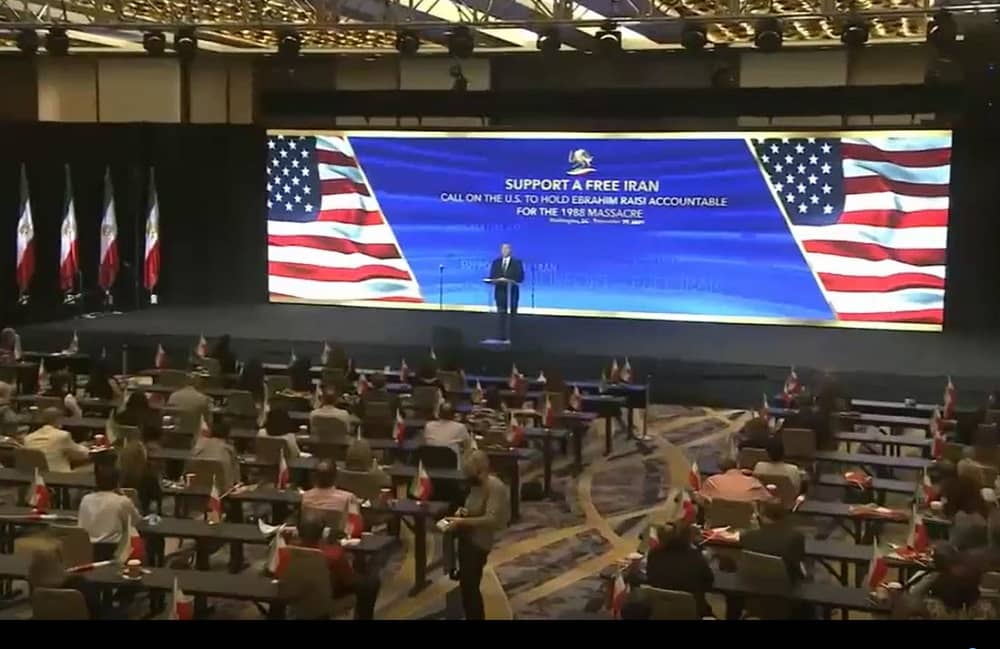 Pompeo referred to the 1988 massacre and said, “Ebrahim Raisi, himself, is personally responsible for the mass execution of thousands of Iranian political prisoners, names of over 5,000 have been published. The bodies of these brave men and women were dumped in unmarked graves. And Because Iran has never, and likely under this regime will never allow an investigation into these killings, we do not know the true number of Iranians who were murdered. But it is almost certainly more than the 5,000 lists of names that we have.”
He also said, “You know this character Ebrahim Raisi is exactly who Khamenei wants as President – someone who will do his bidding. Someone willing to brutalize and slaughter the Iranian people at his command. This is not moving forward. It is moving backward. It is only those who are resisting, both inside and out, who provide hope for Iran. That is why this gathering and the work you do today is so important.”

Pompeo also said, “The actions in 1979 were of course a key turning point. To understand Iran and its rightful place in history we must unpack what happened in 1979. I think this is why Iran will never return to rule by a dictatorial Shah or theocratic regime. This fight is the real fight and it began in those frightful first moments of the so-called revolution in 1979.”
Concerning the path forward, Pompeo said, “The United States must lead the world, starting today, on this occasion, to hold him accountable for crimes against humanity that he committed Any dealings with Raisi, would be tantamount to dealing with a mass murderer. This is not only immoral but counterproductive. All of us should make this crystal clear to our allies in Europe and Asia as well and hold them accountable if they deal with this man that sent thousands of his country to execution in 1988.”
The content of Raisi’s speech presumably reflects a strategy of quietly escalating tensions with the Western adversaries while simultaneously urging those adversaries to continue reaching out diplomatically. But participants in the Washington and Stockholm conferences warned American and European policymakers that such outreach would only embolden the Raisi administration’s escalations, with consequences for international security as well as for the Iranian people.

Urging to hold Ebrahim Raisi accountable for the #1988Massacre
Maryam Rajavi: Raisi is a mass murderer. He does not represent the Iranian people and must face justice – Washington, D.C. – September 20, 2021 #ProsecuteRaisiNow #UNGAhttps://t.co/pRNaWwkXUA pic.twitter.com/qlnGmh4pJ8

“The international community must adopt a firm policy on Iran – something that meets the desire of the Iranian people and is vital to regional and global peace and tranquility,” said Mrs. Rajavi on Monday, before adding that the full range of Tehran’s malign activities should be seen as branches of the same overarching strategy.
Based upon that view, Mrs. Rajavi went on to suggest that the first step toward undermining Tehran’s aggressive strategy could be holding its leaders accountable for human rights abuses and crimes against humanity. She said: “We urge the United States, the European Union, and its member states to refer the dossier of human rights violations in Iran to the UN Security Council. Such a measure will enable the UN to arrange for the international prosecution of [Supreme Leader] Khamenei, [President] Raisi, and other regime leaders for committing four decades of crimes against humanity and genocide.”
The reference to genocide reflects an assessment offered by multiple legal scholars in prior conferences on the 1988 massacre. They highlighted passages from Khomeini’s fatwa as support for the conclusion that MEK members and other victims were targeted on the basis of their belief in a moderate, apolitical brand of Islam that is inherently at odds with the mullah’s fundamentalism. Of Raisi’s role in implementing that order, Pompeo noted that he “wasn’t an advisor or a foot soldier; he was an executioner.” The former US Secretary of State also stated, therefore: “Raisi should be prosecuted, not tomorrow, not next week, not next year. We should prosecute him now.”

Previous articleSanctions or Regime, Which One Has Plagued Iran’s Economy
Next articleIran: The Inhumane COVID-19 Policies of the Regime Leave 436,100 Deaths