Documents of the Iran 1988 Massacre 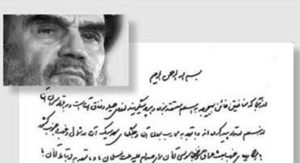 Despite the conspiracy of silence, important documents have been revealed, casting a dark stain on Khomeini and the Iranian regime. Those presented in this chapter include some of Khomeini’s decrees and exchanges of letters with the regime’s officials at the time. These documents were not published when written. Even the book that the regime published in 22 volumes entitled “Sahifeh,” which is a collection of Khomeini’s messages and speeches, has not included these documents. Their release at this time reflects the popular support of the Resistance and the profound effects of such a massacre, which have created rifts within the regime leading to leaks of some secrets. Despite all this, some key documents remain hidden, including:
A record of Khomeini’s negotiations with his regime’s top officials that resulted in the decree for the mass murder of the MEK.
Khomeini’s fatwa for the mass execution of Marxist prisoners, which began in late August 1988.
Khomeini’s ruling submitting the decision to continue the killings to the Expediency Council.
Khomeini’s decree to arrest released Mojahed prisoners and execute them immediately.
The record of all those massacred
The files on the battlefield trials in western Iran