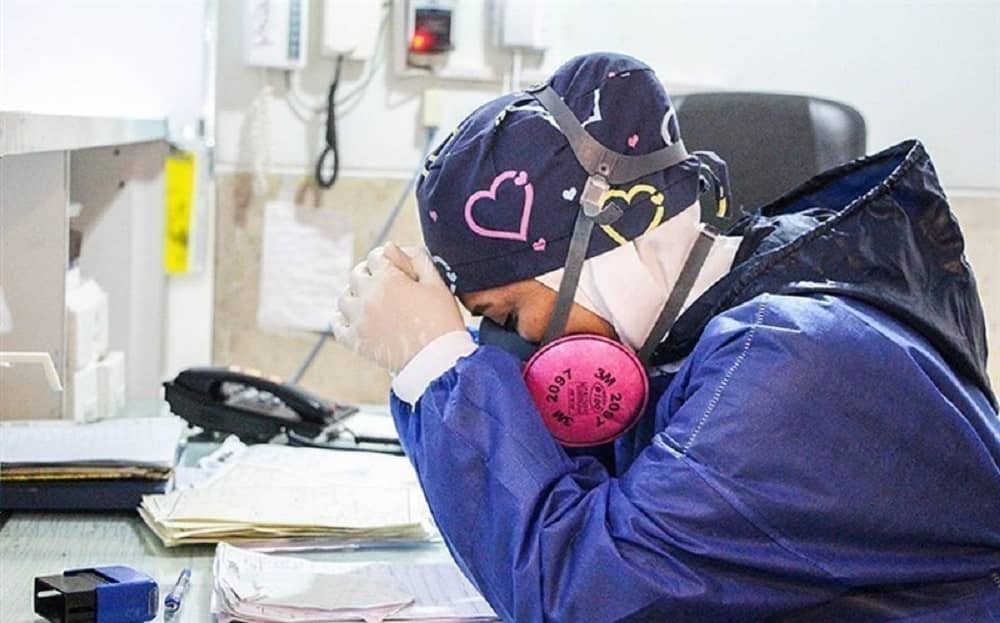 Iran’s Covid-19 crisis worsens daily, and “It seems a greater tragedy is coming with another huge Covid-19 wave in the country,” according to the state-run Setar-e Sobh daily on August 11.

Iran is “facing the tragedy of massacre of its citizens by the dangerous coronavirus. Hundreds of Iranians lose their lives daily due to the shortcomings and misdemeanor of the [regime],” according to the state-run Jahan-e Sanat daily on Wednesday, August 11.

While regime officials try to blame people or the international sanctions for the worsening Covid-19 crisis, state media acknowledge the regime’s inhumane coronavirus policy is the real reason for the current situation. According to Jahan-e Sanat daily, “since the beginning of the Covid-19 outbreak, the management process of this virus in Iran has faced incredible [the officials’] inefficiencies.”

The major Iran protests in November 2019 rattled the regime’s foundations. While the regime was able to oppress protests by killing at least 1500 people and arrested several thousand. Yet, the protests erupted in less than two months when the regime shot down a Ukrainian airliner. Thus, the mullahs’ regime understood they are unable to control the restive society. They needed a savior, and that savior was the Covid-19 virus.

The regime’s Supreme Leader, Ali Khamenei, called this virus a test and blessing, and by inaction, banning vaccines, and deception, Khamenei and his regime used the Covid-19 outbreak to momentarily control Iran’s explosive society.

The tragedy of Iran coronavirus outbreak is not too big: Ali Khamenei, the regime's supreme leader

The Iranian resistance has revealed the regime’s inhumane coronavirus since the beginning of the outbreak in Iran. The situation has reached such a critical point that state media acknowledge how the regime created and worsened this crisis.

“Hassan Rouhani’s government urged people no to go to work and avoid shopping. They told people to stay at home, wear masks, and use disinfectants. Yet they refused to explain that most people who have been under pressure for the last two years due to the rampant unemployment and recession and are unable to make ends meet could stop their work,” the state-run Jomleh newspaper acknowledged on August 11.

“Citizens, despite having many problems, finally cooperated with the Covid-19 Task Force in the first few months and endured all the financial pressures. But the government delayed in starting the general vaccination that had begun in the world. The Ministry of Health’s officials spoke of the herd immunity and refused to help the business,” Jomleh adds.

“Days and months passed, and the world began to produce vaccines. Some vaccines also received global certificates, and their mass production began. The World Health Organization created COVAX to address the global vaccination. Yet, officials did not take necessary measures to procure vaccines, and if they did, we did not see,” Jomleh daily acknowledged the regime’s refusal to procure vaccines.

“In recent months, many countries, which had a worse situation than us, have been able to reduce death and control the pandemic through general vaccination. But we rejected the scientific leadership of the world. Since we couldn’t replace it, we claimed with the illusion that we could produce vaccines. Now, less than six percent of our population have received two vaccines doses,” Jomleh acknowledged the regime’s criminal scheme of producing the so-called domestic vaccine.

Khamenei and the financial institutions were behind the production of this vaccine. Thus, they received astronomical budgets for the so-called vaccine production and further plundered the country’s wealth.

“When the world announced the existence of a new virus, we denied it. When they warned about its danger, we only gave people recommendations.  When the world announced it has started mass production of vaccines and asked us to register to receive vaccines, we stood idly by. We laughed at countries with high mortality rates.  Time has passed, and today the world is weeping for us because we failed to control this virus and do not have hope for success. Today, the same countries have returned to almost normal conditions, and the death toll is not high. The vaccinated people will not die if they get Covid-19. But we keep moving from one Covid-19 peak and wave to another with mass casualties,” Jomleh further acknowledged.

“Today, as many experts predicted, the situation has reached a point where even some medicines, such as fluid-IV and oxygen, are not available, and the cost of treatment is high. Power outages are disrupting medical devices and equipment, and we are approaching the daily deaths of 600 people. Yet, some officials do not accept responsibility and still give hollow promises,” Jomleh acknowledged the regime is continuing its inhumane Covid-19 policy.

Despite the regime’s efforts and the increasing death toll, the regime has failed in controlling Iran’s restive society, and the recent protests are testaments to this fact.

In fact, by prolonging its inhumane Covid-19 policy, the regime increases the society’s hatred toward the mullahs and their destructive role.

“We are facing a phenomenon of the accumulation of [anger]. This accumulation is a problem and would soon show its effects, causing a much larger social crisis. We are heading to nowhere,” Mostaghel daily warned on Tuesday.