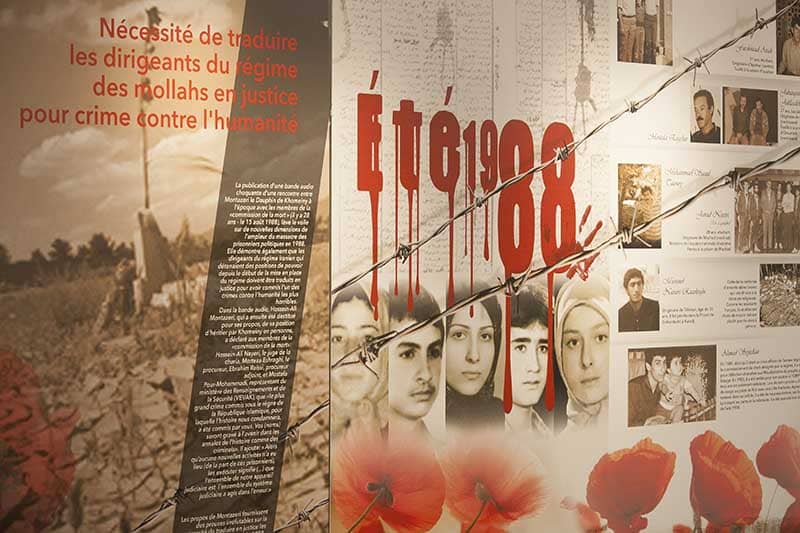 Iran’s June 18 sham presidential election brought renewed attention to the clerical regime’s crime against humanity, and it underscored the urgency of as-yet-unheeded calls for its leading perpetrators to be held accountable. Among those perpetrators is the Iranian regime’s new president-select, who will take over for the regime’s outgoing President Hassan Rouhani in August. In 1988, Ebrahim Raisi was serving as deputy public prosecutor for Tehran, and in the summer of that year, he became one of the key figures on a “death commission” tasked with implementing a vicious fatwa in the nation’s capital.

That fatwa from the regime’s founder, Ruhollah Khomeini, is a firmly established part of Iranian history, although Western policymakers are not universally familiar with it and regime authorities have done their level best to suppress public discourse about the ensuing massacre in the three decades since. That suppressive effort has long been challenged by Iranians’ access to social media and by the role of the Iranian Resistance in spreading factual information through independent and underground news sources. In 2016, the regime’s veil of enforced silence was lifted almost completely with the release of an audio recording from the time of the massacre, which featured Khomeini’s would-be heir complaining to fellow officials about the mounting death toll.

That recording confirmed essential details that had previously been shared internationally by the People’s Mojahedin Organization of Iran (PMOI/MEK). Among those details was the fact that the death commissions’ victims included young teenagers and pregnant women, many of whom were sentenced to be hanged even though they had already concluded their legal sentences. This was made possible by Khomeini’s fatwa, which declared that anyone considered to be “Monafeqin,” or “hypocrites” – a derogatory term applies to the MEK – was guilty of “waging war on God” and was to be immediately “condemned to execution.”

The fatwa even went so far as to say that it would be “naïve to show mercy” to persons who had mounted a coordinated challenge to the theocratic dictatorship. And the bloodlust inherent in Khomeini’s words only built from there, as subordinate officials including the aforementioned heir-apparent, Hossein Ali Montazeri, wrote to him questioning the implementation of his religious edict and suggesting that its effects would ultimately prove detrimental to the regime’s public profile both at home and abroad.

In one early communication, Chief Justice Moussavi Aredebili asked for clarification about how the executions should be meted out, specifically asking whether MEK supporters who were already in the process of serving lesser sentences should really be subjected to capital punishment. Khomeini unequivocally answered in the affirmative, stating that if any person “at any stage or at any time maintains the support of the MEK, the sentence is execution.” He followed this up by ordering the judiciary the “annihilate the enemies of Islam immediately” and use whatever procedures and criteria “speed up implementation of the verdict.”

The consequences of these orders were outlined in multiple letters from Montazeri, as well as from at least one Sharia judge who was directly involved in the operation of a death commission in Khuzestan, who objected to other members’ insistence that when prisoners expressed hesitance to fight on the frontlines of the war with Iraq, it signaled that they were “holding onto their beliefs” and thus continuing to work against the theocratic system.

These tribunals collectively oversaw the hanging or death by firing squad of over 30,000 individuals, the vast majority of them being members of the MEK. The regime has, of course, never acknowledged this statistic and has repeatedly made efforts to cover up the extent of the killing, by paving over the mass graves in which most of the victims were secretly interred.

Last year, a group of United Nations human rights experts wrote a letter to the regime authorities demanding an end to this practice and to the broader practice of covering up the massacre’s legacy by criminalizing public discourse and threatening survivors and victims’ families. The letter was delivered to Tehran in September and urged the release of all relevant information about the death commissions and the outcome of their actions. It was then published for an international audience in December after it became abundantly clear that the regime had no intention of responding or taking international complaints seriously.

This message was very strongly reinforced in June when the Iranian regime’s sham election led to Ebrahim Raisi being confirmed as the country’s next president. His virtually uncontested campaign for election was met by extensive protests which condemned him as the “henchman of 1988” and set the stage for a massive electoral boycott on June 18. The regime acknowledges that fewer than half of eligible voters took part in the election, the National Council of Resistance of Iran, revealed that the actual participation rate was less than ten percent.

The election turnout was certainly the lowest in the history of the Iranian regime’s sham presidential elections, and it reflected both the lingering wounds of the 1988 massacre and the growing public support for the group that Khomeini tried, unsuccessfully, to destroy with his fatwa. The electoral boycott is only one of several recent examples of that growth. In January 2018 and November 2019, Iran underwent two virtually unprecedented nationwide uprisings, both of which featured slogans popularized by the MEK and demonstrated broad support for its platform of regime change.

The second of these uprisings encompassed nearly 200 cities and towns and provoked such panic from regime authorities that they immediately opened fire on crowds of protesters, then began a campaign to systematically torture those who were arrested in its midst. The initial shooting incidents accounted for approximately 1,500 fatalities, and the impact of the torture and subsequent prosecutions has yet to be definitively assessed. Whatever the case may be, Raisi’s “election” points to the threat of further reprisals from a regime that continues to stand by the shamelessly brutal strategies ordered by its founder in 1988.

The international community must take steps to prevent such escalation. This is all the more imperative in light of its prior failure to take action over the 1988 massacre, either while it was still ongoing or in the three decades since. In their letter last September, the UN human rights experts noted that this failure “had a devastating impact on the survivors and families” of the massacre, and “emboldened Iran… to maintain a strategy of deflection and denial that continue to date.”

Tehran’s decision to ignore that letter underscores the need for the UN and its leading member states to take measures that lead to accountability for the regime as a whole and especially for those participants in the 1988 massacre who occupy the topmost leadership positions today.

Previous articleIran: Uprisings and Demonstrations in Aligudarz and Shahinshahr in Solidarity With Khuzestan’s Uprising
Next articleIran Water Protests Reflect Awareness of Longstanding Corruption