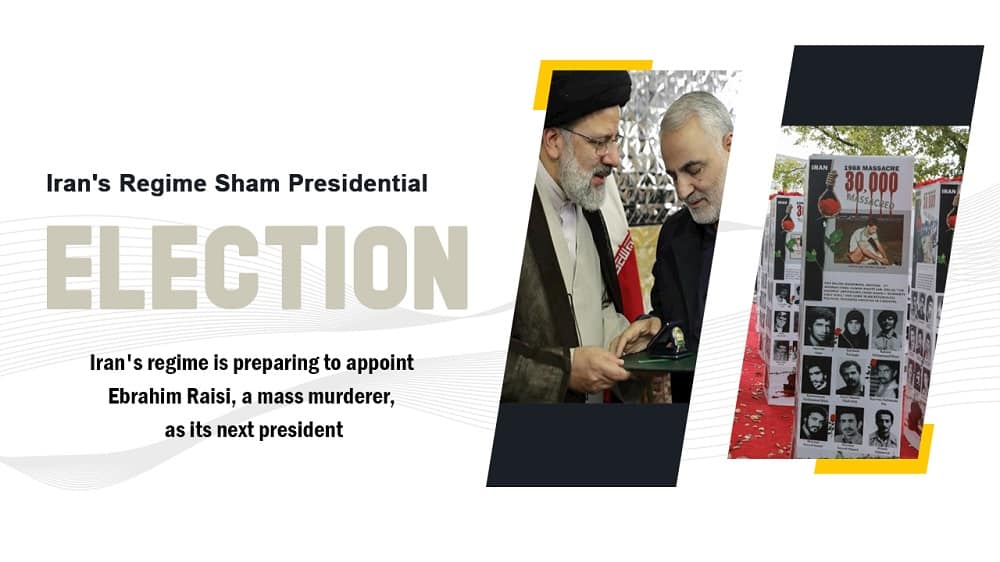 Barring extreme, unforeseen changes in Iran’s political situation, Ebrahim Raisi will be selected by the supreme leader to be the regime’s next president. The regime’s sham presidential election is set to take place on June 18 is little more than a formality, as Mr. Mohammad Mohaddessin, the Foreign Affairs Committee Chairman for the National Council of Resistance of Iran, called “a travesty [and] a selection process by a supreme leader who is himself unelected.” Thus, it is expected that the voter turnout for the regime’s sham election will break the record low set just last year by the mullahs’ parliamentary elections.

Just one month before those sham elections, Iranian activists in more than a dozen provinces staged demonstrations to reiterate their rejection of both the “hardline” and “reformist” factions of the regime and to make it clear that their preferred political outcome is regime change. The January 2020 protests showcased many of the same slogans that defined two earlier, nationwide uprisings, one in January 2018 and another in November 2019. Collectively, these uprisings set the stage for last year’s mass electoral boycott, and despite a downturn in social unrest during the coronavirus pandemic, there are growing signs of a similar boycott surrounding the current presidential campaign.

Those signs have even been acknowledged by some of the regime officials and state media outlets, whose predictions for civic participation reach as low as 25 percent of eligible voters. Meanwhile, the Iranian opposition, the People’s Mojahedin Organization of Iran (PMOI/MEK), has been continually working to further popularize the nationwide boycott of the regime’s sham presidential election.

In April alone, “Resistance Units” affiliated with the MEK held public demonstrations and posted pro-boycott messages in at least 250 locations across the country. They took substantial risks in so doing, especially given that many of their messages were accompanied by images of the NCRI’s president-elect, Mrs. Maryam Rajavi calling the boycott effort as an opportunity to “vote for regime change.”

The Resistance Units’ actions also show the general sentiment among the ordinary Iranians protesting over a variety of personal causes who have declared they will boycott the regime’s sham elections. Pensioners and investors who have been systematically harmed by economic policies and official neglect have held dozens of these protests in recent weeks, and the majority of them have featured the endorsement of an electoral boycott. Among the most familiar slogans in public demonstrations today are variations on the chant, “We have seen no justice; we will not vote anymore.”

There is a clear continuity between those slogans and the anti-government sentiment that pervaded the country during the January 2018 and November 2019 uprisings. The underlying condemnation of the entire system has no doubt been reinforced by the process leading up to the sham presidential election. Ebrahim Raisi’s victory in that election is a foregone conclusion because nearly all so-called candidates have been barred from appearing on the ballot despite their involvement in terrorism and oppression.

Only a handful of minor officials are left to give the vague appearance of legitimacy to the electoral process, but the Iranian people are not deceived by this. Neither are they ignorant of the implications behind the regime’s Supreme Leader Ali Khamenei’s efforts to directly promote Raisi from judiciary chief to president. Raisi’s ongoing rise is a feature of the regime’s longstanding practice of rewarding corrupt officials and human rights abusers for their loyalty to the theocratic system and their role in cracking down on dissent.

Throughout his career, Raisi has embodied a commitment to brutality in preserving the mullahs’ regime. In 1988, he played a leading role in the massacre of political prisoners instigated by a fatwa from the regime’s founder Ruhollah Khomeini. The religious edict declared the members and supporters of the MEK to be enemies of God, which would go on to comprise the overwhelming majority of over 30,000 victims.

More recently, Raisi has reaffirmed his vile reputation by defending the legacy of the massacre and praising Khomeini for a strategy that afforded the MEK “no mercy.” He has also added to that legacy in his capacity as judiciary chief, effectively overseeing the systematic torture of thousands of arrestees following the November 2019 uprising. Separately, authorities led by the Islamic Revolutionary Guard Corps brought a swift end to that uprising by opening fire on crowds of protesters and killing over 1,500.

While the regime might have hoped that the torture and bloodshed would make the population wary of expressing dissent publicly by any means, the actual result has been quite the opposite. The regime’s conduct evidently prompted more unrest at the beginning of 2020, followed closely by the most successful electoral boycott in the regime’s four-decade history.

Mr. Mohaddessin, the NCRI Foreign Affairs Committee chair, said in a press conference last week, there is a “looming nationwide uprising waiting in the wings” and that “it will be far more intense and widespread than in previous years.”

Mr.  Mohaddessin offered some general recommendations to Western powers in his press conference, including the recommendation that they join the Iranian people in condemning the June 18 election and adopt policies that might lead to accountability for Raisi and other perpetrators of crimes against humanity.

These recommendations are sure to be clarified and expanded upon in the coming weeks and months, as more information emerges about the impact of an electoral boycott and the reach of subsequent protests. The supporters of the Iranian people and Resistance will have an opportunity to give their own impressions of the situation in July when the Iranian Resistance holds its annual gathering of expatriate activists – an event that came to attract upwards of 100,000 in the years before the pandemic.