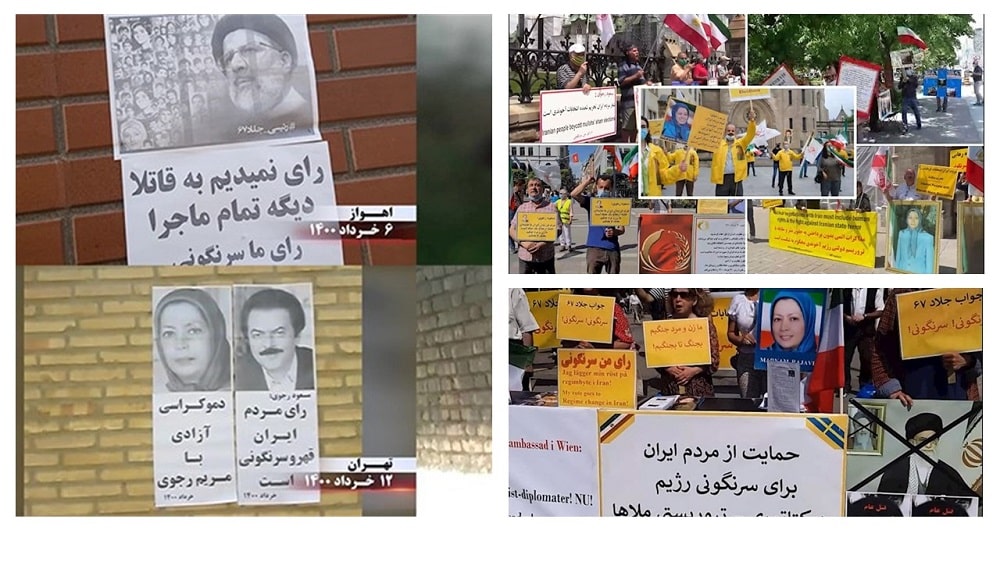 Days before Iran’s sham presidential election, calls, and activities for boycotting the regime’s election amplify, both inside Iran and abroad. The People’s Mojahedin Organization of Iran (PMOI/MEK), its supporters inside and outside of Iran, mainly its internal network of the “Resistance Units,” have played a key role in popularizing the call for boycotting the regime’s sham election.

On Friday, the MEK supporters and members of the Iranian diaspora held protest rallies in London, United Kingdom, and Oslo, Norway. Iranians chanted slogans against Ebrahim Raisi, the preferred candidates of the regime’s Supreme Leader Ali Khamenei. They underlined that “Iranian people have not forgotten, Raisi is the murderer of 1988 massacre.” Raisi has played a key role in the 1988 massacre of over 30,000 political prisoners, mainly MEK supporters.

On Saturday, MEK supporters continued their protests in Vienna, Sweden, Germany, and Canada, echoing the Iranian people’s desire for regime change and reiterating calls for boycotting the regime’s sham election.

They held signs and placards condemning the regime’s terrorism and human rights violations and urged the international community to support the Iranian people’s desire for regime change. The MEK supporters also held pictures of Mr. Massoud Rajavi, the Iranian Resistance’s Leader, and Mrs. Maryam Rajavi, the President-elect of the National Council of Resistance of Iran (NCRI).

Protests by the MEK supporters and members of the Iranian diaspora continued on Sunday, Monday, and Tuesday in four corners of the world.

On Sunday, Iranians in Luxembourg joined their compatriots, calling for the nationwide boycott of the regime’s sham election. They held a sign which read, “Raisi, Iran’s Eichmann must be tried,” comparing Raisi to Adolf Eichmann, a Nazi notorious henchman.

On Sunday, the MEK supporters in Montreal, Canada, echoed the Iranian people’s demand inside Iran for a free country. They held a sign which read, “Free political prisoners in Iran.”

On Monday, during their gathering in Gothenburg, Sweden, and Vienna, Austria, Iranians called for a nationwide boycott of the regime’s sham election. In addition, the protesters in Vienna reminded western powers engaged in dialogue with Tehran that “Nuclear negotiations with Iran must include human rights and the fight against Iranian regime’s state-sponsored terrorism.”

Iranians and MEK supporters in all their protests supported activities by the MEK’s Resistance Units in Iran, spreading the call for a boycott of the regime’s farce presidential election.

The MEK Resistance Units organize anti-regime activities all around the country, installing posters, images, and banners to support regime change. According to the MEK, “In walls of various cities were written, “We will not vote for murderers,” “Boycott mullahs’ sham elections,” and our vote is regime change.”

As MEK’s website wrote, “The campaign was launched in April by the MEK and is expanding every day. During the whole month of April, these activities were carried out in over 250 areas in 27 provinces. In May, this exceeded in over 310 places in all Iran provinces.”

These activities have been large welcomed by the public and turned into a national movement to boycott the farce election. Iranians now believe that the election boycott is a response to the killing of over 1500 protesters during the major Iran protests in November 2019.

Many family members of the November 2019 martyrs in recent days have been publishing videos calling for regime change and underlining “my vote is regime change.”

These growing calls to boycott the regime’s election foretell the regime’s absolute failure to hold its sham presidential election to legitimize its regime.

“As the June 28 election approaches, the psychological warfare of the enemies against our establishment and to boycott the elections has intensified through diplomatic means, news and satellite networks, and cyberspace,” wrote the state-run Javan daily on June 3, echoing the regime’s fear of the opposition activities.