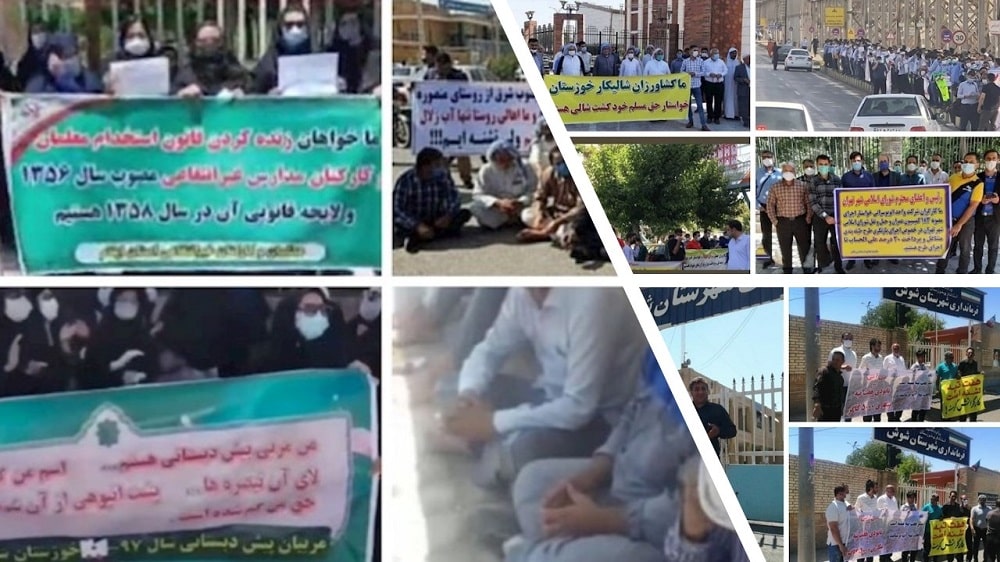 According to a report tailed by the People’s Mojahedin Organization of Iran (PMOI/MEK), protests from all walks of life to the economic and social problems continue in Iran. These protests, with people underlining they “will not vote” since they have “seen no justice,” foretell a nationwide boycott of the regime’s sham presidential election.

On Tuesday, June 8, 2021, a group of teachers working at so-called “non-profit” schools held their third protest in front of the regime’s parliament, protesting their poor working conditions and low salaries. There have been many protests by teachers working at the non-profit schools on Monday in other cities across Iran.

While non-profit schools in Iran get huge sums from students’ families, teachers’ salaries are one-third of a teacher working in regular schools. It is worth noting that Iranian teachers in regular schools receive a salary many times under the poverty line.

Similarly, on Monday, a group of preschool educators in Izeh, in Lorestan Province, held a rally protesting their low incomes and the regime’s refusal to cover their commuting expenses.

Rice farmers in Khuzestan held a rally in front of the Ahvaz governor’s office on Tuesday demanding their rights to irrigation. In recent days, Iran’s southern provinces, such as Khuzestan, are experiencing water shortages due to the regime’s devastating policies.

Members of the Islamic Labor Council of Iran’s Bus Company gathered in front of the Tehran City Council on Tuesday, demanding the implementation of the job classification plan.

On Tuesday, a group of plundered investors of Cryptoland Exchange Company gathered in front of the regime’s Economic Crimes Court in Tehran. “The closure of Cryptoland led to the blocking of the capital of many people operating in the digital currency market. For more than a week, people in Rial and foreign currency assets have been frozen at the Cryptoland office,” wrote the state-run Tejarat News on May 29. Reports indicate the Revolutionary Guards (IRGC) Intelligence Organization which dominates Iran’s cryptocurrency exchange, has blocked people’s assets.

On Tuesday, the Persian Gulf Holding employees in Bandar Mahshahr Special Economic Zone held a rally for the second consecutive day. They protested the type of their contracts and low wages.

On Monday, workers of Kota Abdullah Municipality gathered in front of the courthouse of Karun city to protest the arrest of 4 of their colleagues. Reports from Iran indicate that nine contract workers have been detained by the repressive police at the 30th Ahvaz Police Station since last week after they went on strike for not receiving their job benefits. Two of these workers are still detained.

On Monday, a group of workers of the Haft Tappeh Sugarcane Factory held a rally in front of the governor’s office of Shush city. These workers demanded their unpaid wages and right to irrigation, underlining they would continue their protests until they get their rights.

On Saturday, the regime’s natural resources organization handed over the lands of the pastures around the village of Magtou to fisheries and Ferdows, a sub-company of the IRGC’s Khatam Construction Headquarters, to create fish ponds. In response, local farmers of Magtou village protested the occupation of these lands by the IRGC.

“We are having the most unstable economic and social situation in the last 42 years. People’s dissent is at its peak, the economic situation is very poor, and people under heavy pressure,” Mahmoud Ahmadinejad, the regime’s former president, acknowledged on Monday.

“With the increase of public awareness, one cannot expect people to behave like in the past. There have been events in the country in recent years that have widened the gap between the people and the [regime], and this gap is deepening daily, which will lead to a decrease in [the regime’s] legitimacy,” the state-run Setar-e Sobh daily wrote on Tuesday.