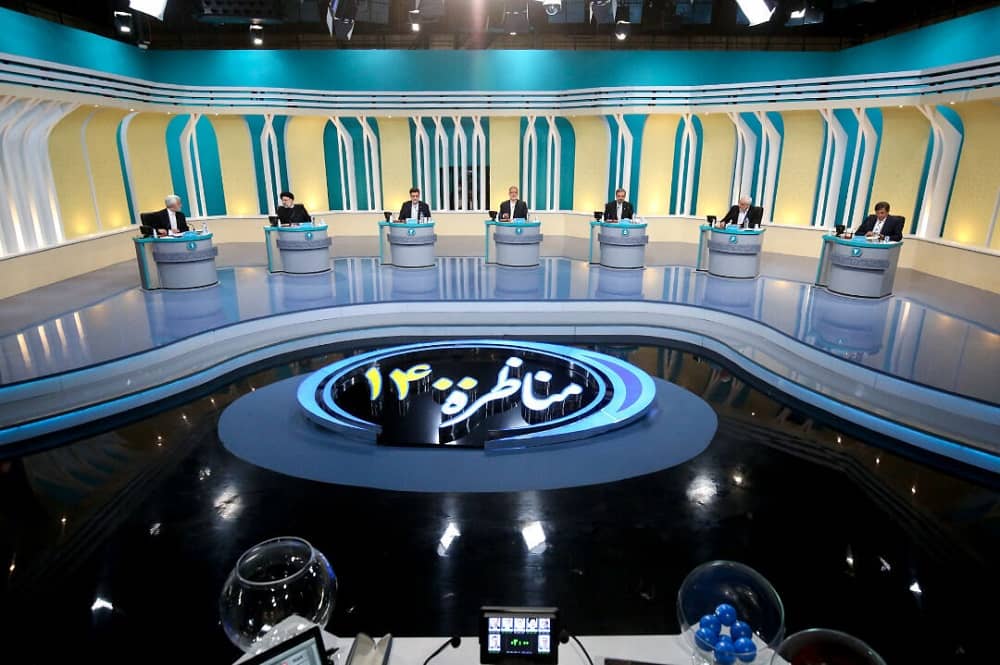 During the third debate of the regime’s sham presidential election, the so-called candidates acknowledged some aspects of corruption and crimes of the regime. This “cursing match,” as described by the regime’s MPs, showed the regime’s worsening internal crisis and amplifying infightings.

The following text summarizes some of what the regime’s candidates said during the third debate.

“Why are people unsatisfied? Why the slightest social problem rapidly turns into a crisis? It rains, there is flood people show dissatisfaction. Look at the fuel price issue in November 2019 [what happened]. These are not solutions,” said Mohsen Mehralizadeh, one of the candidates, referring to the society’s explosiveness and the November 2019 major protests.

“Look at the cases of individuals like Isa Sharifi, who was afflicted to the then-mayor of Tehran [Mohammad Bagher Ghalibaf current parliament speaker]; it has been left unattended for four years. He had embezzled billions of tomans. No one cares. Look at the case of Babak Zanjani. If these cases were clarified, people would have trusted,” Meharlizadeh said, referring to some cases of corruption in the regime.

“Today, despite repeated advice by officials, daily campaigns, and colorful banners and posters, the election atmosphere is still cold and soulless due to people’s distrust of their impact and frustration with their unfulfilled dreams,” Mehalizadeh acknowledged the growing call for boycotting regime’s sham election.

Each candidate tried to blame the other one for the country’s economic and social crises.

“It has been a year that people face the choice of life over bread,” said Amir Hossain Ghazizadeh-Hashemi, one of the candidates, referring to the ongoing Covid-19 outbreak in Iran and the regime’s refusal to help people while on quarantine.

“A few people connected to the [regime] enjoy some privileges. The unemployment rate is rising. The country’s resources are unfairly distributed, and people blame officials for it. If [officials] had a bit of decency, our national athletes were not street vendors, and people were not plundered,” Ghazizadeh-Hashemi acknowledged adding, “People are frustrated because they see no decency in the system.”

Ghazizadeh-Hashemi acknowledged that “in one case alone, $3 quadrillions worth of currency in subsidies vanished.”

“We see the children of the officials and mafia dominating the economy,” Mohsen Rezai, the commander of the Revolutionary Guards (IRGC) in the 1980s and one of the election candidates, acknowledged during the debate.

“Inflation of 52% is a catastrophe created by the government of Hassan Rouhani. The government has tried to manage itself using people’s belongings. As a result, liquidity has increased sixfold, today there is a conflict between plunderers and those plundered,” Zakani added.

One of the issues discussed during the debate was the regime’s decision to triple the fuel price in November 2019, which led to a major uprising. Hemmati tried to deny his role in increasing the fuel price and blame the rival faction, mainly Ebrahim Raisi, the supreme leader’s preferred candidate, for the subsequent crackdown on protesters. However, he also acknowledged people’s decision to boycott the regime’s sham election.

“What happened that people who once said ‘where is my vote’ now say ‘no vote.’ Mr. Raisi, Iran is not North Korea that you want to limit the internet. You speak about women in a way as they do not know you. Mr. Raisi, you have suddenly become kind to people. If it is true, remove the filtering on Telegram. Demand the Supreme leader issue an amnesty for those arrested in November 2019,” Hemmati said.

“Hemmati says he opposed the decision to increase the fuel price. How could you lie, Mr. Hemmati? Your official letter of September 2019 shows your demand for increasing the fuel price for compensating the government’s budget deficit,” Zakani told Hemmati.

Neither of these criminals is worried about Iranian people’s plight or care about those killed or arrested during the recent protests. On the contrary, they all part of the same establishment and have a dark record of participation in human rights violations.

The regime’s increasing infighting reflects officials’ fear of Iranian people underlined that they “neither forgive nor forget” the mullahs’ forty years of oppression and corruption. So these so-called candidates are fighting over more power so they could further plunder people.

“What happened under the name of the debate was rather a classroom where students read their essays, competing to finish at the top. Each candidate presented himself as a superhero for resolving Iran’s deep crises and try to pursue people they have the solution to all problems in their pockets,” wrote the state-run Mostaghel daily on Saturday. “If they have solutions, then they have betrayed the country and the very same people.  If the main issue is resolving the country’s crises and people are important, why these [candidates] did not work together to prevent the country from reaching this point. This is just a story. The [debate] is a fight over more power and having more economic and political resources. People are just an excuse [for achieving these resources] that’s it,” Mostaghel added.