Iran Election 2021: What To Know About the Upcoming Sham Presidential Elections

Written by Mansoureh Galestan
7th May 2021 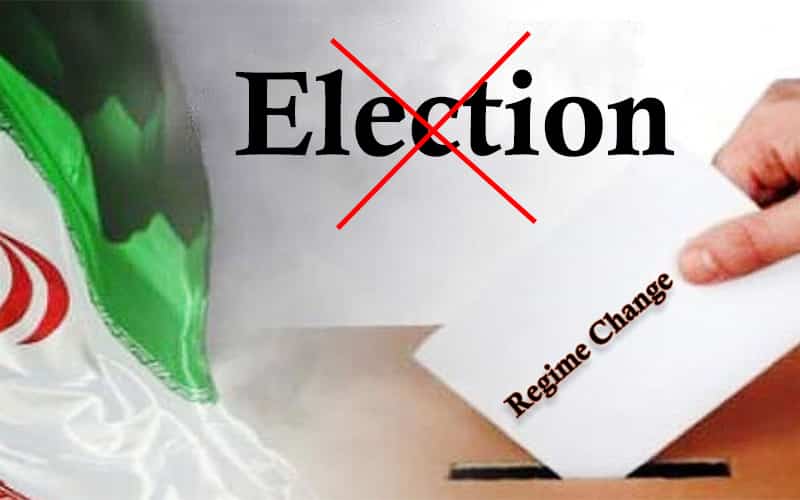 Presidential Election in Iran under the mullahs’ rule

Article 115 of the regime’s Constitution and Article 35 of the election law set the threshold for Presidential candidates to Muslim males, faithful to the “Islamic Republic”, and with practical belief and commitment to the principle of the velayat-e faqih (absolute clerical rule). The unelected and handpicked Guardian Council recently added further exclusions in a tactical adjustment to further disqualify and curtail potentially troublesome candidates from the self-proclaimed “Reformist” camp in the upcoming elections.
The Guardian Council has 12 members, six clerics, and six jurists. Khamenei appoints the six clerics, and the Judiciary Chief, whom Khamenei appoints, picks the six jurists. So, in effect, all Council members are chosen by the Supreme Leader.

The Guardian Council routinely disqualifies numerous candidates, especially women, based on the regime’s exclusionary electoral process and Khamenei’s assent. Only loyalist males who have demonstrated their absolute allegiance to the supreme leader, as the sole indisputable source of power in the regime, are permitted to run.
In 2013 and 2017, the Council disqualified two-term presidents Akbar Hashemi Rafsanjani and Mahmoud Ahmadinejad, based on their falling out with Khamenei, even though they were deemed qualified to run and serve as President in previous terms.
The Iranian regime’s Presidency is deemed to be ineffectual and has little impact on Iran’s domestic and especially foreign policy. Former President Mohammad Khatami famously described his role as president as that of a mere functionary. All such policy is set out by the Supreme Leader through various agencies controlled by his office, and the executive branch is challenged by parallel IRGC controlled power centers. And yet the Presidency in Iran affords the winner a commanding role in state organizations and agencies that sit atop a corrupt oligarchy controlling Iran’s national wealth, including control of the oil, gas, and petrochemical industry that fuels Iran’s corrupt rentier regime.
The presidency as an institution introduces instability in the rule of the supreme leader and stands in contrast to its absolute rule. In 12 past presidential elections, the regime has had seven presidents. Five of these former presidents have faced expulsion, ostracism, house arrest, and even murder (AbolHassan Bani-Sadr, Rafsanjani, Khatami, Ahmadinejad, and one has to see what might happen to Rouhani after the end of his term).
The supreme leader as the vicegerent of God on earth, and answering only to the Almighty, has total power and no accountability. Whereas the president, though seemingly elected by popular vote, must be confirmed by the supreme leader. The presidency and the electoral process are strictures forced upon Khomeini’s concept of the absolute rule of the theocratic leader by domestic political pressure of the Iranian people’s century-old movement for freedom. As such, the electoral process under this regime is highly stage-managed and controlled to bring results that both factions can accept while not violating the absolute authority of the regime’s supreme leader, which underpins the system and is a redline. In short, elections in Iran are a travesty of the electoral process.

What is the difference between this election and previous ones?

Elections in Iran are a farce. Since Khamenei succeeded Khomeini in 1989 as a much weaker Supreme Leader, he has faced skeptical regime loyalists that split into power-sharing factions. The factions vie for turns at assuming the presidency to profit their beneficiaries. The farcical nature of the elections is highlighted by the several-fold multiplication of ballot numbers in election headquarters where both factions are present, to imply popular participation in the vote. In the last election cycle, nearly five million fraudulent votes were stuffed into ballot boxes in some precincts, and the regime’s election headquarters announced a four-fold 73% participation rate that was a ludicrous lie.
This highly corrupt, restricted, and tainted electoral process is even further controlled by the regime through numerous ways and means, the exclusionary list of candidates being only the first step. The process of electoral “engineering” involves both factions trying to outmaneuver the other by various machinations, through control, vote-buying, intimidation, and outright ballot box stuffing.
The election results tend to reflect the balance of power among the regime factions. In 2005, Supreme Leader Ali Khamenei decided to consolidate his rule by securing Mahmoud Ahmadinejad’s election through electoral “engineering”. In 2009, Ahmadinejad won via the same process despite widespread public outcries.
Khamenei failed to push through his own choice in the 2013 and 2017 elections however and Hassan Rouhani became president. Khamenei principlists tend to rely on voter intimidation and overt fraud, whereas the opposing faction relies on hollow promises on improving the lives of the citizens. Both factions vie for an increasingly paltry segment of the electorate who are openly challenging the regime’s authority in the streets with chants of “We won’t vote anymore, so many lies have been heard.”
The uprisings in December 2017, January 2018, November 2019, and January 2020 have changed the conditions for both factions in the upcoming elections:

These developments portend what is to come as far as the presidential election is concerned. The same trend of a Khamenei push to retrench in the face of popular discontent and international isolation happened during the parliamentary elections in March 2020, where the Guardian Council disqualified most of the rival camp’s candidates. The election this time will also face a serious tendency by all discontent segments of society to boycott.

The regime’s studies of public attitudes have predicted and expressed grave concern over a lower turnout for the presidential election than the March 2020 parliamentary election farce.
The Interior Ministry publicly put the March 2020 election turnout at 42% nationwide and about 20% for Tehran. However, an internal Ministry report admitted the turnout was 20% nationwide and 9% in Tehran.
According to poll results by a polling agency, Gamaan, in the period between February 17 and February 26, 2021, about 78% of people over the age of 19 stated that they would not vote in the upcoming presidential election.

Regime retrenchment in the run-up to the presidential election

The Velayat-e-Faqih regime consists of mafia-like factions competing to plunder the nations’ wealth, leading to serious internal feuding at the top echelons of power. The two main factions are known as Principlists (Osulgara:) and so-called “Reformists” (Eslah Talaban). In the face of uprisings and international isolation, Khamenei has grown increasingly weak and vulnerable in the regime’s internal balance of power. He has, therefore, had no choice but to instruct the Guardian Council to approve candidates that while loyal to him, represent both factions. If Khamenei’s March 21 speech is any indication, he has set his mind to purge the rival faction to protect his regime from wavering that could endanger it in the current sensitive circumstances.

A. The Principlists (pro-Khamenei faction) currently comprise four political tendencies: The Unity Council, the Conservative Alliance, the Perseverance Front, and Ahmadinejad’s faction. The factions that are loosely coalesced around Khamenei suffer from deep schisms, especially after January 2018 and November 2019 uprisings. Each faction has invoked the criteria set by Khamenei to put forward its own candidate. None seems to be willing to withdraw in favor of the others
B. The so-called Reformist faction, known as “followers of the Imam’s line” (Imam refers to the regime’s founder Khomeini), played a key role in the US embassy occupation, establishing and running the security services, the prisons, and embarking on internal repression and external terrorism. After Khamenei became the supreme leader in 1989, the faction conveniently proclaimed itself to be “reformist.” Opposition forces contend that the only reform this faction seeks is to its share of plunder in the current regime. This faction faces two problems in the upcoming presidential election. 1) disqualification of its primary candidates by the Guardian Council and 2) a nationwide election boycott after the uprisings of January 2018 and November 2019 which threatens its ability to change the regime’s internal balance of power.

Clearly, Khamenei has decided that to protect his regime, he must do his utmost to ensure the victory of a preferred retrenchment candidate. However, the pro-Khamenei factions have not yet decided who that candidate should be.
Who emerges from this presidential election will depends on the regime’s internal balance of power and whether Khamenei can withstand a brewing internal insurrection and international isolation. As such, the regime is facing an impasse in the upcoming election and something must give. A wrong turn would lead to even more protests and uprisings more ferocious in scope and more widespread in scale than what has already been seen.